Albert G. Mulley Jr. ’70, MD, MPP, has been elected to the Institute of Medicine of the National Academies of Sciences. Membership in the IOM is considered one of the highest honors in the fields of health and medicine, and recognizes individuals who have demonstrated outstanding professional achievement and commitment to service. 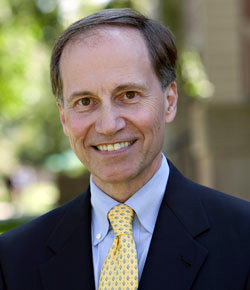 Albert G. Mulley Jr., MD, MPP, has been elected to the Institute of Medicine, one of the highest honors in the field of health and medicine. (photo by Joseph Mehling ’69)

Mulley, an international leader in the science and application of shared decision making and other forms of collaboration between clinicians and patients, is director of The Dartmouth Center for Health Care Delivery Science (TDC), and professor of medicine at the Geisel School of Medicine at Dartmouth.

“I am honored and humbled by my election,” says Mulley. “I had the privilege of working extensively with the IOM at a formative time in my professional life. That experience helped shape what has been for me a wonderful vocation. I was grateful then and I am now for new opportunities to contribute to the IOM’s efforts to improve health care in America and the world.”

Mulley is one of 70 new IOM members and 10 foreign associates whose election was announced today, October 15, 2012, at the 42nd annual meeting of the Washington, D.C.-based organization.

“The Institute of Medicine is greatly enriched by the addition of our newly elected colleagues, each of whom has significantly advanced health and medicine,” says IOM President Harvey Fineberg. “Through their research, teaching, clinical work, and other contributions, these distinguished individuals have inspired and served as role models to others. We look forward to drawing on their knowledge and skills to improve health through the work of the IOM.”

Geisel Dean Wiley “Chip” Souba says Mulley’s election to the IOM is a significant recognition of Mulley’s many contributions to improving health care and is emblematic of the “outstanding faculty we have at Dartmouth. Al’s election is a great honor for him personally, and for Dartmouth and the medical school. Al continues to make significant contributions to primary care, and to improving how patients and health care professionals make informed decisions together.”

New IOM members are elected by current active members through a selection process that recognizes individuals who have made major contributions to the advancement of the medical sciences, health care, and public health. The group’s charter requires that at least 25 percent of its members are selected from fields outside the health professions, such as engineering, social sciences, law, and the humanities.

Mulley’s research focuses on the use of decision theory and outcomes research to distinguish between warranted and unwarranted variations in clinical practice. This work has led to development of research instruments and approaches, including shared decision-making programs, to support clinicians and patients in their decision-making roles and to catalyze both learning collaboratives and clinical trials. These approaches have shown decreasing utilization of high-cost medical and surgical interventions while improving measures of decision quality, including stronger associations between patients’ personal preferences for health outcomes and the care they receive.

His work has influenced the agendas of many public and private organizations engaged in clinical care as well as medical research and education. He was a founding director of the Informed Medical Decisions Foundation and continues to serve as senior clinical adviser.

Mulley also served on multiple committees of the IOM and of professional societies, and as a consultant and visiting professor to government agencies, health care organizations, and academic medical centers in North America, Europe, and Asia. In 2011, he was named the first International Visiting Fellow at the King’s Fund in London and appointed International Consultant to the Chinese Hospital Association.

Before becoming the inaugural director of TDC in 2010, Mulley was the founding chief of the General Medicine Division and director of the Medical Practices Evaluation Center at Massachusetts General Hospital in Boston. He spent 35 years on the Harvard Medical School faculty and on staff at MGH, where he developed innovative approaches to patient care, medical education, and clinical research.

Established in 1970 as the health branch of the National Academy of Sciences, the IOM has become recognized as a national resource for independent, scientifically informed analysis and recommendations on health issues. The organization’s projects in the past year include studies of environmental factors in breast cancer, health information technology and patient safety, nutrition rating systems and graphics on food packaging, establishing crisis standards of care during catastrophic disasters, and treatment of post-traumatic stress disorder.