Yes Martha, It Was an Earthquake!

Many of us felt it and more even heard the rumbling. At approximately 7:12 p.m. last evening (Tuesday, October 16), the ground shook throughout New England.

According to the United States Geological Survey (USGS), the epicenter of the 4.6 magnitude quake was in southwest Maine, three miles west of Hollis Center, originating at a depth of about five kilometers. The USGS initially gave the earthquake a 4.6-magnitude rating and later downgraded it to 4.0. 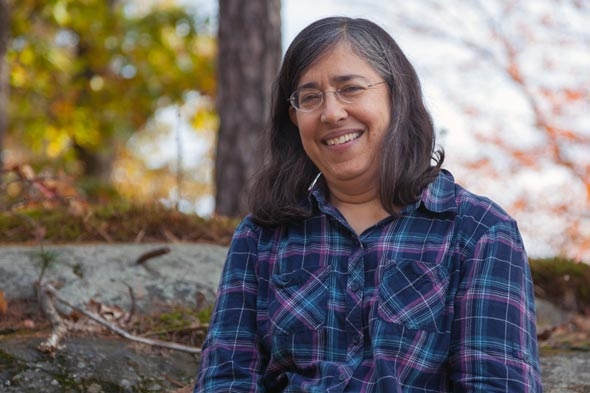 Dartmouth’s Leslie Sonder is a geophysicist specializing in the physics of mountain building and the forces underlying these long-term processes. (photo by Corinne Arndt Girouard)

Leslie Sonder felt it on campus. An associate professor in Dartmouth’s Department of Earth Sciences, she first ascribed it to someone walking down the hall. “Fairchild does shake a bit when people walk, but this really was an earthquake,” she says.

“New England is not in a seismically inactive area,” Sonder says. “We have earthquakes. And even more rarely, there are damaging earthquakes but this is just a little one.”

The geophysicist, whose studies are in the physics of mountain building, explains that we do not have any present-day mountain-building activity. But we have plenty of old faults left over from the building of the Appalachians about 400 million years ago, resulting in mountains that may have been as high as the Himalayas at the time.

“We are not sitting on an active fault like the San Andreas, but they were active when mountain building was happening,” she says. “If stresses build up enough, then they are capable of a small level of movement.”

Don’t expect to feel aftershocks in the Upper Valley. They are always possible, but they are likely to be much smaller than the main shock. “Maybe if you lived right above the epicenter you might feel a few very minor aftershocks,” says Sonder.