After Sandy, Lights Were Out, but Cellphones Were Charging

When Hurricane Sandy blew through the Northeast in late October, leaving many New Yorkers without power for days—and with no way to charge their cellphones—it was a moment made for BioLite, a small, $130 camp stove, invented by Jonathan Cedar ’03 and a business partner, that can double as a power source.

As The New York Times explains it, “you light a fire inside a metal fuel chamber, where a thermoelectric generator converts the heat into electricity to run a fan. The fan blows air into the fire to oxygenate it and create a clean burn. The generator also powers a USB port for charging phones and other electronics.” 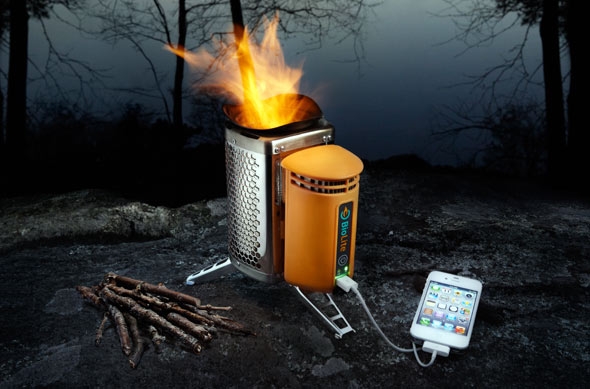 The BioLite camp stove has a generator that can power a USB port for charging phones and other electronics. (Image by BioLite)

The Times reports that company employees set up the stoves on tables placed in neighborhoods hit the hardest by the storm, offering hot drinks to people who gathered around to check out the stoves and charge their phones.

After a while, the police ordered BioLite to stop the stove demonstrations, but by then quite a few New Yorkers were back to at least one place they wanted to be: on their cellphones.

As noted by Dartmouth Engineer magazine, the stove’s inventors initially just wanted to create a camp stove that didn’t burn gas or use batteries. Eventually, they came up with more than that, even: a biomass-powered cook stove that uses its own waste heat to improve combustion efficiency. The stove, they realized, had the potential to provide a relatively cheap and clean way to cook food.

The inventors teamed up with Jonathan den Hartog ’03, Thayer ’05, to found BioLite, a Brooklyn-based company that now sells the stoves to at least 70 countries. The company hopes the stoves, which it says produce 90 percent fewer particulate and carbon monoxide emissions, can reduce health problems caused by chronic exposure to the pollutants, particularly in India and Sub-Saharan Africa.