When the curtain is raised on the Dartmouth Department of Theater’s production of Angels in America: A Gay Fantasia on National Themes, Part One: Millennium Approaches, audiences will see a veteran of several Dartmouth productions, Talene Monahon ’13, as Harper Pitt, and a newcomer, Sam Van Wetter ’16, in the role of Prior Walter. 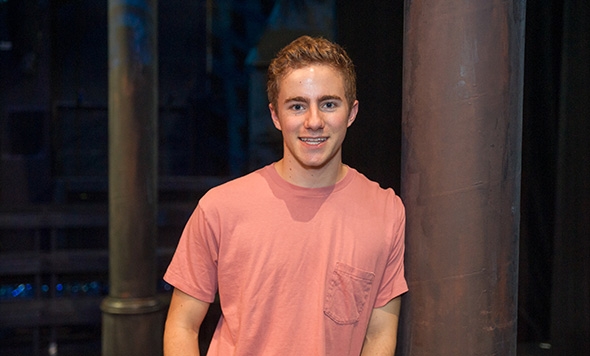 Both share strong theater backgrounds and a passion for Tony Kushner’s 1993 Pulitzer Prize-winning play, which is being staged at Dartmouth for the first time. The play opens in the Hopkins Center for the Arts’ Moore Theater at 8 p.m. on Saturday, November 3, and runs through November 11.

“I really love this play and I have a lot of fun with Harper, the Mormon wife (who suspects her husband is gay). She’s tricky to play because she’s crazy, but not insane,” says Monahon, who is from Belmont, Mass., and will be starring in her sixth theater department production. Most recently, she played Penny Pingleton in Hairspray last February. “I think the text is beautiful and the piece itself is so epic. You don’t get to do plays like this very often, so we’re very lucky to be doing it.”

Van Wetter saw a nearly seven-hour production of parts one and two of Kushner’s groundbreaking play (part two is called Perestroika) on the same day, “with a break for dinner,” in his native Denver. “This play is such a pleasure to work on, and the scope of it is so large,” says the first-year student, who also writes plays and fiction. “In the course of three hours, the play talks about so many relevant and exciting things. We go back to the 1950s with Roy Cohn and Ethel Rosenberg and the Rosenberg trial, and to the AIDS crisis of the 1980s, where the play is set. It speaks to so many different parts of American culture and puts it in the context of a broader historical scale.” 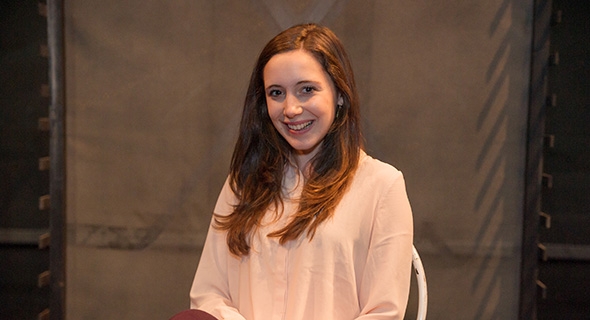 Talene Monahon ’13 is appearing in her sixth Dartmouth Department of Theater production. She also works as a writing tutor for The Student Center for Reading, Writing, and Information Technology, is a member of Kappa Delta Epsilon sorority, and is president of the co-ed a cappella group The Dodecaphonics. (Photo by Eli Burakian ’00)

Growing up, both Van Wetter and Monahon acted extensively. Van Wetter, who has been acting since the age of 7, graduated from the Denver School of the Arts and appeared in many Denver Center Theatre Company productions. Monahon performed in theater productions at Buckingham Browne & Nichols School in Cambridge, Mass., as well as in community and regional theater throughout the Boston area. She is currently working on a Senior Fellowship project about gender relations at Dartmouth, which will culminate in a one-woman show next spring.

The pair, who have become good friends since Angels in America rehearsals began in September, also share strong family ties to Dartmouth. Van Wetter’s father, Bob Van Wetter, and mother, Betsy Brew, are both members of the Class of 1981, his grandfather is David Brew ’52, and three aunts, one uncle, and a great uncle also attended Dartmouth. Monahon’s late grandfather, Richard Monahon, was a member of the Class of 1939, Tuck 1940, and her father Grant Monahon ’67, sister Lia Monahon ’98, and an uncle are also graduates.

Following the November 4 performance, there will be a post-show discussion with student representatives of the Real Beauty Initiative, Gender Sexuality XYZ, and the cast at 5 p.m. in the Moore Theater.

Prior to the November 8 performance, there will be a pre-show discussion, “AIDS and its Angels as a Mirror on America,” at 6 p.m. in 219 Wilson Hall. Panelists include Sienna Craig, associate professor of anthropology, and Tim Lahey, HIV physician and an associate professor of medicine at the Geisel School of Medicine.

Prior to the November 9 show, director Carol Dunne and lighting and projections designer Dan Kotlowitz will hold a “Behind the Scenes” discussion at 5:30 p.m. in the Moore Theater. And following that night’s performance, there will be a discussion with the cast and artistic team.

Department of Theater Senior Lecturer Carol Dunne, who is directing Angels in America, has worked with Monahan on many Dartmouth productions and at the New London (N.H.) Barn Playhouse, where Dunne is the producing artistic director. “I hired her at the New London Barn after her freshman year and again this summer to play Emily in Our Town,” she says of Monahon. “Talene has a wonderful ability to find the emotional core of a character. So she brings a real truth and an honesty to the role of Harper, and a vulnerability that I think audience members can really relate to.”

As for Van Wetter, who is starring in his first Dartmouth theater production, Dunne says, “Sam has an angelic quality that I thought was perfect for the role, and he has the heart to play the role of Prior, who is diagnosed with AIDS at the top of the show. There’s an innate kindness to Sam, combined with a lot of talent. And it’s always exciting to pull freshman into a main-stage show like this right away because then we have more time with them over the next four years. That’s what happened with Talene.”

Dunne, who is working with 12 actors and a stage crew of nearly 60 on this production, says the theater department is thrilled to be staging Angels in America.

“This is considered one of the great plays of the 20th century, and we’re very excited about it because it’s an opportunity for the students to take on roles that are Shakespearean in their breadth and yet very connected to politics and health issues and issues of identity that are very current now,” she says. “I’ve never felt this kind of ‘in the zone’ energy before here. But we all know it’s really huge for us and that we have something really special.”