Dartmouth Honors Military for Their Service

At the first Dartmouth College Veterans Day Banquet, Stoney Portis, a MALS student and Army Captain who served in Iraq and Afghanistan, told the crowd of about 150 about the difference between studying at Dartmouth and fighting in Afghanistan. 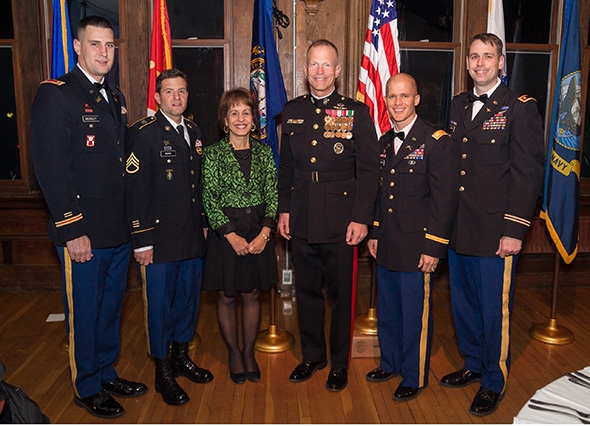 “I thought that serving in Afghanistan was stressful,” he joked, “until I came here for graduate school.”

Portis helped plan Friday night’s banquet and was one of several decorated speakers at the dinner at Collis Center. “What a tribute to have this representation at Dartmouth College,” he said. Portis said he hopes the banquet will become an annual event.

Dartmouth Trustee Nathaniel Fick ’99, who wrote the book One Bullet Away and serves as CEO for the Center for a New American Security,  was presented with a Military Service and Leadership Award from the Dartmouth Graduate Veterans Association.

“I’m really, deeply honored by this,” said Fick. Military service members have a unique perspective to offer Dartmouth, he said, asking the audience, “What lessons can we share with this community?” 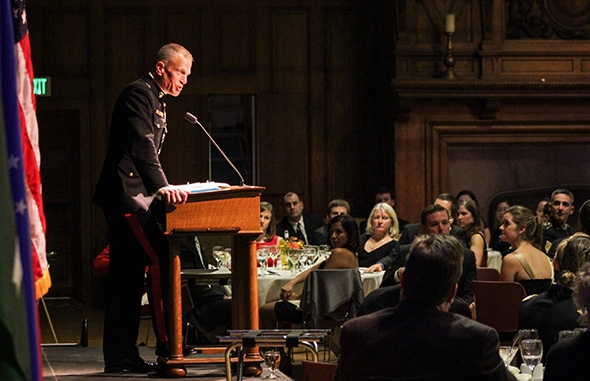 The keynote speaker was Marine Brigadier General Burke Whitman ’78, who said he’d had several conflicting engagements, but this event took precedence. “There was no question I had to be here tonight,” he said. “This really is important.

“I love Dartmouth College, I really do. I’m a big believer in liberal arts education,” said Whitman, a history major at Dartmouth who served tours in both Afghanistan and Iraq.

Before the banquet, members of the Dartmouth College ROTC program performed a formal flag retreat ceremony on the Green. About 60 people, including President Carol L. Folt, gathered on the chilly evening to watch the flag-lowering ceremony, which featured bugle calls by Benjamin Meyer ’15 and the firing of a 15-millimeter cannon. 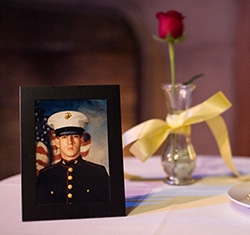 A photograph of Marine Jeffery Holmes of White River Junction, Vt., who was killed in Iraq in 2004, was placed on a small table at the banquet, which Holmes’ family attended. (Photo by Eli Burakian ’00)

At the banquet, one small table sat empty. There was a place set for one; one chair was upturned, the back of it leaning forward against the table. On the white tablecloth sat a framed photograph of Jeffery Holmes of White River Junction, Vt., a Marine who was killed in Iraq in 2004.

Holmes’ father, Scott Holmes, is an electrical supervisor at Dartmouth and his brother, Cory Holmes, is on the custodial staff.  The Holmes family attended the banquet, which helped raise $1000 for a scholarship fund in Holmes’ name at the high school he attended, Hartford High School.

“I urge you to live a life worthy of their sacrifices and remember the debt we owe them,” Bucca said.

On Tuesday, November 13, Rabbi Arnold E. Resnicoff ’68 will give a lecture on “Faith and Force: Religion in the U.S. Military Today.” The event is open to the public and will begin at 4:30 in Rockefeller 003.