Dartmouth Research: The Clocks Are Ticking and the Climate Is Changing

Dartmouth plant biologist C. Robertson (Rob) McClung is not your typical clock-watcher. His clocks are internal, biological, and operate in circadian rhythms—cycles based on a 24-hour period. Living organisms depend upon these clocks to keep pace with the Earth’s daily rotation and the recurring changes it imposes on the environment. These clocks allow the plant or animal to anticipate the changes and adapt to them by modifying its biology, behavior, and biochemistry. 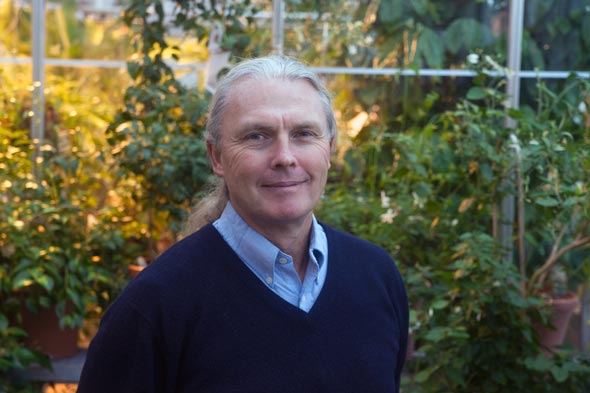 “If you know that the sun is going to go down, and if you are a photosynthetic plant, you have to readjust your metabolism in order to make it through the night,” says McClung, the Patricia F. and Williams B. Hale 1944 Professor in the Arts and Sciences.

“We will need to genetically modify our plants to control our circadian biological clocks,” says Professor Rob McClung. “Every domesticated plant and animal that we have today is already genetically modified. None of them are as they are found in nature. We have manipulated their genes by selective breeding and creating hybrids.”

To produce the corn we eat today, prehistoric farmers first had to find some variant that had a desirable trait, keep its seeds and plant them, repeating the process for countless generations to bring out that trait. That is selective breeding and it produced a plant whose genome was modified.

To make a tomato plant resistant to a particular disease or pest, we might find some related pest-resistant species in the wild and cross it with our garden variety tomato to produce a hybrid. Successive crosses would preserve the “tomato-ness” while selectively retaining that little bit from the wild relative that resists tomato-eating bugs.

“Along with introducing the gene or set of genes encoding resistance, we may have also brought in a whole bunch of other ill-defined genes on either side,” McClung says. “We don’t know the extent of it. We don’t know what else is in there. While some regard this as a ‘natural’ approach, the unknown genetic fellow travelers could be problematic or even dangerous.”

For more than 20 years, we have possessed the technology to precisely insert a single gene, making one change and only one change, producing what is known as recombinant DNA. “We are modifying genes in a much more informed way and precise way, targeting specific genes and manipulating those,” he says.

“Nevertheless, there is vocal opposition to this practice, in spite of the fact that we have been doing it for decades and there is yet to be a single example of anything bad happening from that,” says McClung. “It is a philosophical standpoint based on a lack of understanding. People don’t understand the science and they come up with a lot of arguments against it.”

The dilemma rests on timing. Conventional breeding, though imprecise and unpredictable, is a workable but lengthy process. Recombinant DNA is fast. In a world beset by overpopulation, famine and global climate change, McClung questions whether we can really afford the time to wait.

Seeking Knowledge Among the Weeds

McClung uses the Arabidopsis plant in his research on the mechanisms that affect plant behavior and its genetics. He jokingly refers to it as “an inconsequential little weed,” but holds it in high esteem as an experimental test bed.

According to the National Institutes of Health, this member of the mustard family is the model organism for studies of the cellular and molecular biology of flowering plants. “Because plants are closely related, it is quite likely that knowledge derived from Arabidopsis studies can be readily transferred to agronomically important species,” says McClung.

Water and the Changing Climate

McClung sees internal clocks as increasingly important in the face of global climate change, and to agricultural productivity in particular. “In the context of climate change and the need to exploit increasingly marginal habitats, fuller understanding of clock mechanisms may offer strategies to improve crop productivity,” says McClung. “We need to know how an organism measures time and how it uses that information to coordinate its physiology and behavior.”

Water is the landscape on which biological clocks and climate change intersect. Agriculture consumes the vast majority of our water, and warmer and dryer conditions are predicted for much of the agricultural land of the United States. This is based on our current understanding of the changes predicted to be associated with global warming, and in this scenario our aquatic resources will become increasingly scarce.

Water is lost during the gas exchange that takes place in photosynthesis—carbon dioxide in, oxygen out—through small pores in the surface of leaves that periodically open and close under the control of a biological clock. Exercising control over this clock could be a means of conserving water. “We know that these little cells on the surface of the leaf are controlled by the clock,” says McClung. “It could be that different clocks regulate it slightly differently, and we would like to find the best clock, fine-tune it, and perhaps optimize the ability to get CO2 in without losing water.”

Water figures prominently in another aspect of plant physiology. Water moves up through the stem to the leaves, involving proteins called aquaporins. “There is a big family of genes that encode aquaporins, and in Arabidopsis the circadian clock governs the expression cycles of about a third of those genes,” says McClung. “That suggests there is a mechanism to actually regulate this hydraulic conductivity over time, constituting another instance where the clock is involved in water use efficiency.”

Together with colleagues in Wyoming, Wisconsin, and Missouri, McClung has been looking at another crop, Brassica rapa, a close relative of which is the source of canola oil. With a five-year National Science Foundation grant of more than $5 million, the group is investigating Brassica’s circadian patterns, looking at inheritance and water use efficiency. “We have mapped 10 genetic regions that are associated with water use efficiency,” says McClung. “We have also traced circadian parameters to most of those same areas, suggesting a link between the two. This association suggests that we could potentially use the clock to manipulate water use efficiency.”

In a related project, McClung will be working with soybeans, attempting to correlate circadian period length with latitude. “If we can understand the clock, we might then manipulate the clock in ways to achieve desired goals, including water use efficiency and better yield.”

McClung feels strongly that this sort of basic research has the potential to contribute in significant ways to food production increases. “Whether or not we achieve that increase or whether it allows us to fertilize a little less and so pollute a little less but maintain the same productivity level, anything in the net direction that is positive is going to help,” he says. “We can’t necessarily say exactly how it will help, but I think it’s not unreasonable to think that this very basic research can have a real world impact, and one hopes it will.”