“You look at the material world and see objects and how you can use them. I look at the material world and see a fascinating hidden life which is within our control, if we can only understand how it works,” says Jane Lipson, the Albert W. Smith Professor of Chemistry at Dartmouth. Lipson looks at things from the point of view of both a chemist and a physicist. “What I do lies between the two sciences, and there is some engineering thrown in there, too,” she says. 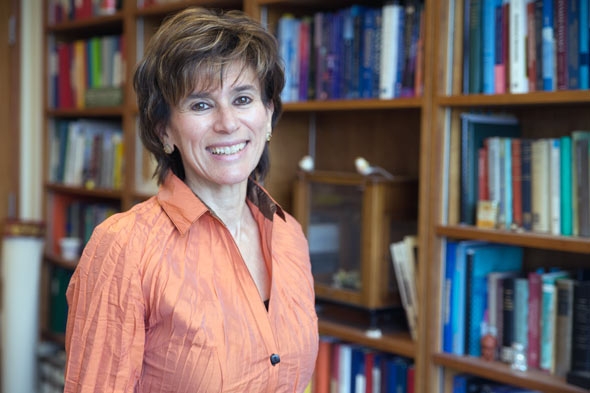 Straddling the worlds of chemistry and physics, Professor Jane Lipson explores the mystery of polymers and the future of science. (photo by Eli Burakian ’00)

On the Future of Scientific Research

Jane Lipson is worried about the future of polymer chemists, or any chemist, or any scientist, for that matter. “It has to do with the way this country funds its science,” she says.

Looking across the political spectrum, Lipson thinks that most people say they recognize the importance of science and technology, but have little commitment to investing in it.

“You can’t just invest in the things that ‘work.’ It’s not like that,” she says. “Some things work and some things don’t, but ‘blue sky research’—basic research—pays off big time. If you look at the money invested and then you look at the outcomes of things that are produced and used and marketed and the jobs created, it really pays off.”

As an example, Lipson points to the 50th anniversary of the laser, celebrated in 2010. “Lasers were not designed for applications. And yet they are so ubiquitous now, from medical applications to construction to grocery shopping.”

Many of her undergraduate students express a genuine interest in science, but she muses that if the jobs aren’t out there for them, they will pursue other kinds of careers instead. “I see this as a really critical time. The nature of funding is worrisome,” Lipson says. “There used to be a model where industry invested more, but industry now operates on a very short time frame.”

She alludes to the huge research labs of the past, supported by companies like DuPont, ExxonMobil, and Kodak. “Financial resources today are very limited,” says Lipson. “We all understand that, but I am very worried about scientific research funding, and I do think that as scientists we need to be better at communicating to the public the importance of fundamental science.”

For her part, Lipson is participating in the Op-Ed Project at Dartmouth, an initiative that holds workshops to help faculty members make complex research digestible for broad audiences. “They tell us that we need to speak in a different language because the language we speak to each other as scientists obviously is not the language you reach out to the general public with, and scientists know that,” she says. “It is not necessarily easy to get the public’s attention but it is something we must do if we are to get support for future scientific research.”

Lipson is a polymer chemist who, by definition, deals with long chain molecules composed of repeating structural units. She constructs mathematical models that can explain and predict the behavior of these molecules. “The math is a shortcut to the physical behavior. You look at it and it is a bunch of equations, but there is actual physical behavior in there,” she says.

While many think of polymers only as plastics, these ubiquitous materials appear in many guises with which we interact daily. From our Styrofoam coffee cups to the clothes we wear, to the furniture on which we sit, and the cars in which we ride, our use of polymers is extensive.

In the industrial sector, there is a great deal of interest in optimizing the properties of existing materials for specific applications and in designing new polymers for particular uses. The applications range from drug delivery systems, to films that will purify or protect, to construction materials, to new airplane or auto components. In the search for the best, the strongest, the lightest, the most enduring polymers, Lipson and her colleagues have become polymer problem solvers who are particularly focused on outreach to experimentalists.

A polymer may be a compound, created by joining molecules together in a process not unlike gene splicing, building a pure molecular compound comprising one very large molecule. Lipson explains that creating a new polymer from scratch is hugely expensive and unpredictable. The monomers—the small molecules that link up together to make a polymer—may not even want to react to make that chain.

“The preferred alternative is to take an existing polymer that has one set of desirable properties but not everything you are looking for, and select another polymer with the properties that you also want. You try and mix the two together to make what is called a composite that exhibits additive or novel properties,” says Lipson.

Both approaches, synthesizing compounds or mixing composites, can be a guessing game, opening a door for consulting chemists to impart some clarity and direction. Enter Lipson and company.

Lipson’s research involves developing theories that will make predictions about what will mix and what won’t mix; and if it does mix, under what conditions that will occur. Lipson says you cannot necessarily predict what the mixture’s properties will be, even if you know the properties of the constituents. “You can’t just add the properties together,” she says. “You can’t say, for instance, that this polymer melts at 100 degrees and the other polymer melts at 50 degrees, so I am just going to mix two equal amounts and they’ll melt at 75 degrees. It doesn’t work like that.”

These are complex molecules that Lipson tries to understand and then, based on her conclusions, develop rules that can be applied to make predictions. “Part of what we do is test our predictions, then make new predictions, and apply these to more complicated systems,” she says. “We try and understand molecules large and small, why they behave the way they do, and then use that to our advantage.”