As Dartmouth Students Gear Up for the Election, Faculty Offer Insights on the Race

As Americans from Maine to Hawaii take to the polls November 6 to determine who will be the nation’s next president, one of the country’s smallest states could decide the election: New Hampshire.

“New Hampshire is a swing state with a large number of Independents,” says Dean Lacy, professor of government. “There are several scenarios where the state could be pivotal in the Electoral College.”

The importance of the state has been underscored by visits from President Barack Obama, who won the state’s four electoral votes in 2008, and from former Massachusetts Gov. Mitt Romney. Romney visited in 2011 for the Republican Presidential Debate at Dartmouth, while Vice President Joe Biden spoke in Hanover on September 21, 2012. In the 2000 presidential race, Democratic candidate Al Gore, who lost the Granite State, was four electoral votes shy of victory as Republican George W. Bush was elected president.

A large number of college students cast ballots in the 2008 election, and Associate Professor of Government Joseph Bafumi thinks this year’s turnout of young people could be pivotal.

“I’m not sure if [college students’ turnout] will be larger, since some of the novelty of an Obama presidency has worn off, but I think it will still be high,” says Bafumi. “This will be very important for Obama.  If he doesn’t get high turnout among young people and African Americans, he will lose this race.” 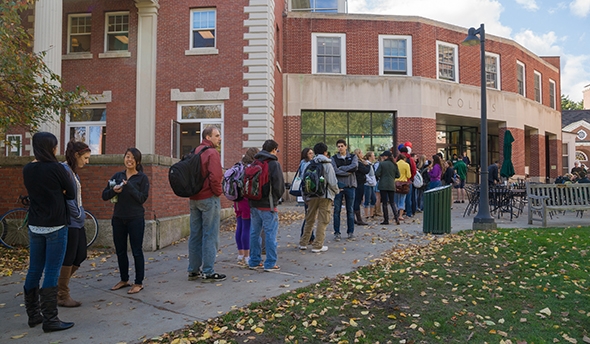 Students line up to register to vote on October 11 in front of the Collis Center. (Photo by Eli Burakian ’00)

Aware that New Hampshire could be vital in a tightly contested election, Dartmouth students have canvassed the campus this year.

Melanie Wilcox ’13, vice president of the College Republicans, says the group has made efforts to communicate about key issues of the election and the impact they’ll have on students.

“Primarily, we’ve been reaching out to college students, educating them about the economy and how it will affect them upon graduation,” says Wilcox. “It is our future; college students should care.”

Mason Cole ’13, president of the College Democrats, says the organization has been working hard to get students to vote—going door-to-door, making phone calls, and bringing lecturers to campus.

Student political groups have even worked together to put on bipartisan events. This fall, College Democrats, College Republicans, and College Libertarians teamed up to help sponsor a voter-registration drive. Cole joked that there seemed to be a lot of interest in voting, since there were more students standing in line to register than to eat the free food that was offered.

In addition, all three presidential debates and the vice presidential debate were screened at “watch parties” around campus, which included a mix of students from different political parties as well as undecided voters. Cole says these events were well attended and there was less divisiveness than one might expect.

“Of course, during some points in the debates there were some standard moments where different sides would be cheering,” said Cole. “But overall, I think it was a pretty civil environment and people were excited to be there.”

“Romney made modest but important gains in late September and early October due to the fading of Obama’s convention bounce and the first debate,” says Nyhan, who recently wrote about election momentum in the Columbia Journalism Review. “Since then, however, the race has been essentially static—Obama maintains a narrow lead.”

One of the largest unknowns in the election may well be Hurricane Sandy, which ravaged much of the Eastern Seaboard this past week. Some experts have suggested the storm’s impact may hinder voter turnout in damaged areas, while others believe the candidates’ response to the crisis could help or hurt their chances. But how influential the storm will be remains a mystery.

“Hurricane Sandy certainly could affect the election, but it’s hard to know how much or what the effects will be,” says Nyhan. “My guess is that it will not change the dynamics of the race substantially, and Obama will remain a narrow favorite heading into Election Day.”

In Hanover, another unknown is how many Dartmouth students will vote.

“It is very hard to predict,” says Cole. “Judging from a lot of people that I’ve seen on campus, people seem to be especially engaged.”

The Nelson A. Rockefeller Center will host a panel discussion, “What Now? Post-Election Opportunities and Challenges,” featuring three Dartmouth government professors, at 4:30 p.m. on November 8 in Room 003 at the Center.