The legendary Donald E. Pease, one of Dartmouth’s best-known professors, has been awarded the 2012 Carl Bode-Norman Holmes Pearson Prize for Outstanding Contributions to American Studies. 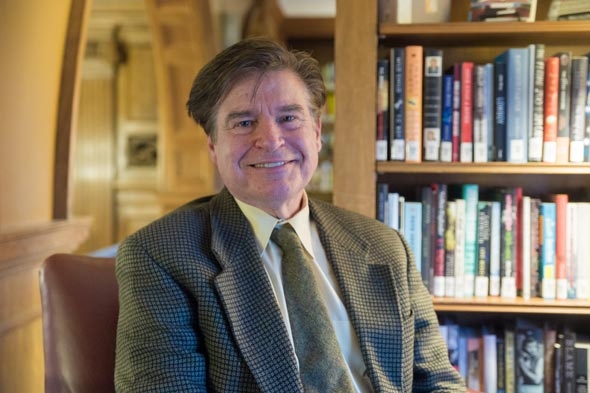 Professor Donald E. Pease has been teaching at Dartmouth since 1973. (Photo by Eli Burakian ’00)

Pease is the Ted and Helen Geisel Third Century Professor in the Humanities and chair of the Dartmouth Liberal Studies Program. The English professor is also the biographer of one of Dartmouth’s most famous alumni, Theodore Seuss Geisel, known to millions as Dr. Seuss.

The Bode-Pearson Prize, awarded annually by the American Studies Association, is one of the oldest and most prestigious awards in the field. Pease will receive the prize at the ASA’s annual meeting in San Juan, Puerto Rico, on November 16.

“In the important field of American Studies, many honors for scholarship and teaching are bestowed every year—but none compares with the Carl Bode-Norman Holmes Pearson Prize,” says Dean of the Faculty Michael Mastanduno.

“This distinction is reserved for singular individuals whose careers truly reflect a lifetime of achievement and service to the American Studies field,” says Mastanduno. “Don Pease is just such a scholar-teacher. I cannot imagine a more worthy recipient than Don, and on behalf of the entire Arts & Sciences faculty, we take great pride in his recognition.”

“This means a lot to me,” says Pease, who is also the founding director of the Futures of American Studies Institute at Dartmouth. “The previous recipients were the great founding figures of American Studies, like Henry Nash Smith, the folks who named the award, and fabulous transformative scholars like Guenter Lenz, Gloria Anzaldua, and Janice Radway. The predecessors give this award a standing that renders it all the more valued.”

In nominating Pease for the award, Duke University Professor of Literature and of Women’s Studies Robyn Wiegman wrote, “As one of the most important scholars in American Studies today and a major architect of its extra institutional pedagogies, his contributions to the field are unsurpassed.”

Wiegman and other scholars who wrote letters of support for Pease’s nomination cited the multi-faceted contributions Pease has made to the field. These include the 1996 founding of the Futures of American Studies Institute at Dartmouth; the groundbreaking book series he developed at Duke University Press, The New Americanists; as well as the books he has written—Visionary Compacts: American Renaissance Writing in Cultural Context, and The New American Exceptionalism—and the collections he has edited, among them National Identities and Postnational Narratives; Cultures of U.S. Imperialism; New Americanists: Revisionist Interventions into the Canon; and Futures of American Studies.

“Pease’s scholarship sets out the now institutionalized transition from the Cold War determinations of American exceptionalism to the productive and profound engagement with race, class, gender, sexuality, and now transnationalism and neoliberalism that have so radically transformed American Studies since the early 1990s,” Wiegman says.

Wiegman and others pointed also to the influence of the Futures of American Studies Institute, an intensive weeklong summer program at Dartmouth. “The institute has come to be recognized as one of the most deeply engaging and intellectually rewarding experiences available for both junior and established scholars in the field,” wrote Donatella Izzo, a professor of American literature at Italy’s Università degli Studi di Napoli l’Orientale, in a letter supporting Pease’s nomination.

Pease, who won the 1981 Distinguished Teaching Award at Dartmouth, says he is proud of his work with the Futures of American Studies Institute, the scholarly contributions he has made to the field, and his teaching career.

“I would hope that when people consider my career, they think about my academic career as comparable to the way in which I think of my teaching. As a way of enriching the lives of my students, colleagues, and fellow scholars through the work we share,” says Pease, who has been teaching at Dartmouth since 1973, the same year he earned a PhD in English from the University of Chicago.

“And if by teaching that work and doing scholarship in that field I can not only enrich the lives of my students, fellow teachers, and participants, but I can also render that field all the more transnational, democratic, and global in outlook, then I think I’ve also bettered the field that I entered.”

As Pease approaches his 40th year at Dartmouth, it’s clear the venerable professor is not slowing down. “I have 10 more years, at least, to achieve the kind of capstone that I want,” he says.