Andrew Samwick is the Sandra L. and Arthur L. Irving ’72a, P ’10 Professor of Economics and Director of the Nelson A. Rockefeller Center for Public Policy and the Social Sciences at Dartmouth College. He served for a year in 2003 as chief economist for the President’s Council of Economic Advisers under President George W. Bush, and has been the editor of Economics Letters since 2011. In 2009, Samwick was named New Hampshire Professor of the Year by the Carnegie Foundation for the Advancement of Teaching and the Council for the Advancement and Support of Education. He joined the Dartmouth faculty in 1994. 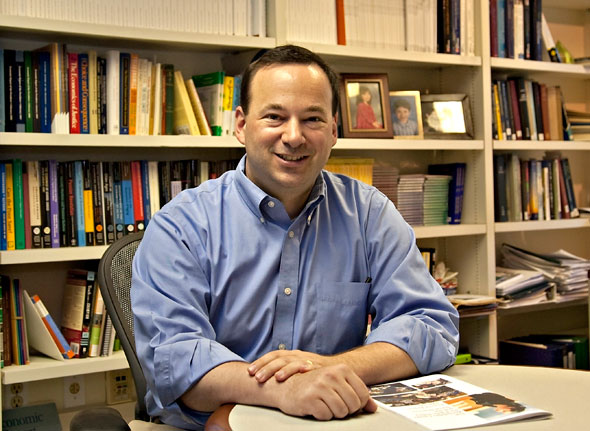 Professor of Economics Andrew Samwick says, “When you see a fiscal cliff, take it.” (Photo by Joseph Mehling ’69)

What is the fiscal cliff?

The fiscal cliff refers to the simultaneous expiration in January 2013 of several tax and spending policies that will dramatically reduce the amount of fiscal stimulus being applied by the federal government.

How did we arrive at this point?

The fiscal cliff has four main pieces. The first and largest of them is the original Bush-era tax cuts, which cut marginal tax rates at all levels. The fiscal impact of those cuts has been magnified by annual changes in the alternative minimum tax, which are also up for renewal.

Fourth, as part of the Budget Control Act in 2011, we set up a system of across the board budget cuts that would kick in if the so-called super committee could not come to an agreement on deficit reduction. Since the committee failed, we now face about $110 billion of cuts per year.

What do these converging elements add up to?

According to the Congressional Budget Office, the sum total of these four factors would result in about $500 billion in terms of money taken out of the economy at a time when the economy is growing weakly and unemployment is still high.

The Congressional Budget Office predicts that we will have a recession of some length in early 2013 if we do not take action to avoid implementing all of these policy changes at once.

Some people are saying this is going to send us down the same path as Europe. What do you say?

In Europe they accept a higher tax burden and lower deficits in exchange for lower economic activity and possibly lower economic growth. So yes, there’s a piece of that statement that’s true.

So, this wouldn’t be our equivalent of austerity measures?

No, even the Congressional Budget Office predicts that it would be a period of mildly negative growth in the first part of 2013 followed by positive growth in the latter part of next year. And as a bonus, we’d be on a path back toward fiscal balance, which is something we seem to think that we can live without.

Our biggest problem is that we’ve become accustomed to having a tax system that doesn’t raise enough revenue to cover our expenses. We’d be closer to it if we allowed all the policies in the fiscal cliff to actually revert. It’s not ideal to have them all revert at once, but that’s better than continuing to kick the can down the road. When you come to a fiscal cliff, take it.

Having the policies all revert is being portrayed in media coverage as the worst possible thing that could happen.

If taxes go up, how do we avoid an economic slowdown?

If you were really worried about a decline in economic activity, you would let everything revert, and then you would commit to spending an extra $350 billion per year on public infrastructure, even if it had to be debt-financed.

I would ramp up public investment in infrastructure and other critical national needs like roads, civilian defense, disaster infrastructure, smart grids, and basic research and development. All of these are needs that we’ve been neglecting.

How would public investment benefit the economy?

When you use debt to fund infrastructure or other productive investments, then the productive capacity of the economy several years hence is larger and gives you the ability to pay off the debt that you issued.

Issuing debt to go on a consumption rampage doesn’t do that. It just allows you to consume stuff today and pass along the bill to someone else. We should stop that.