Faculty members share their insights on current events with Dartmouth Now in a question-and-answer series called Faculty Forum. This week, Dean Lacy discusses political polls and polling and why this presidential election is too close to call.

Dean Lacy is a professor of government and director of the Program in Politics and Law at Dartmouth. His research on lawmaking, public opinion, and elections has appeared in the American Journal of Political Science, Journal of Politics, British Journal of Political Science, and other academic journals. Lacy has written and lectured on the sources of instability in public-opinion polls, third-party candidates in elections, the effectiveness of economic sanctions in international relations, designing optimal electoral rules, and other topics. He uses and teaches research methods such as game theory, experiments, and statistics. 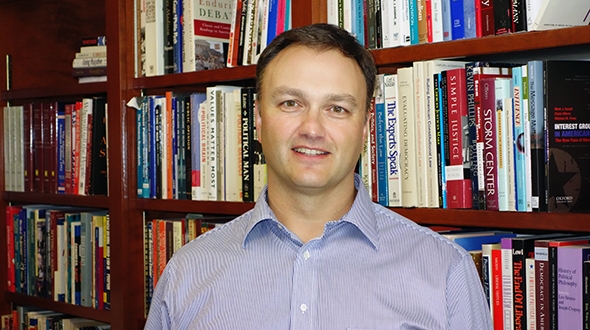 Dean Lacy says that in “a statistical sense, the (presidential) election is too close to call and has been for the past year.” (Photo by Bonnie Barber)

The polls are showing a close presidential race. What are your thoughts on this?

I have not seen anything that suggests a shake-up in the election from six months or even a year ago. Obama’s post-convention bump and Romney’s post-first-debate bump seemed to be short-lived. The poll results tend to move back to their equilibrium from six months to a year before the election. There might be a lot of weekly or monthly variability, but that variability gets cancelled out in the longer term. I think that’s what we’re seeing now. The polls seem to be moving back to a 50-50 or 51-49 popular vote favoring Obama, which is about what he had six months to a year ago in a generic match-up against an unnamed Republican. The margin of errors in these surveys is about 3 percentage points. In a statistical sense, the election is too close to call and has been for the past year.

What do people need to know about polls and polling organizations?

Most of the “polls” or “surveys” that people receive calls about are not really surveys. There are two good indicators that a survey is legitimate. The first is the caller should not know your name. If you a receive call from someone who asks for you by name, they’re probably working for a campaign to raise money or create lists of likely supporters. The second tip-off that a survey is legitimate is that is the caller should ask to speak to someone over the age of 18 in the household chosen randomly, such as by asking for the person with the most recent birthday. Most people are never or rarely contacted by real polling organizations.

Many of the surveys reported in the media are conducted over a few days. They sample households randomly and attempt multiple calls to reach a person in the household. But these surveys often fail to produce an interview with more than half, sometimes more than three-quarters of the phone numbers they call. The people that the polls don’t reach may be different from the people they do reach. Academic polls are usually much slower, in the field for weeks, and attempt a dozen or more calls before giving up a phone number.

All of that is to say that election-year polls can give us a general idea of who has a lead and maybe what direction that lead is heading, but with quite a bit of error.  Aggregating the results of many polls can serve to reduce this error. But I don’t trust that polls can make close calls. Right now I would say the presidential election is too close to call.

Are there more polls today then there were in the past?

There are more polls now than in the past, and they’re using different methods than we had 10 or 20 years ago. Some polls are now auto-calls, where a person enters responses on the buttons on their phone. Several polling organizations use the Internet to contact respondents. But there are fewer polls conducted by colleges and universities because budget cuts have shut down the survey research centers at a number of universities.

Dartmouth is a member of a consortium that has fielded surveys over the Internet through a company called YouGov/Polimetrics. We joined with about 20 other universities, including Harvard, Yale, Stanford, among others, to field a survey where we’re contacting about 35,000 people over the Internet. The problem with Internet surveys is they’re not representative, since the people who volunteer to be surveyed on the Internet are not a random sample of the U.S. population. Telephone surveys are more representative, but Internet surveys are often more accurate. People are more willing to give an honest opinion over the Internet when they don’t see or hear another person conducting the interview.

What are your thoughts on the other elections?

America is focused on the presidential election, but the House and Senate elections are very important. We’ve found through some surveys over the past two or three elections that a small percentage of American voters, maybe 5 percent, like divided government and will split their tickets to get it. Right now some of them are thinking, “If Obama’s president, I’d like a Republican Congress, but if Romney’s president, I’d like a Democratic Congress.” There aren’t many people who think this way, but there are enough to make a difference in some states and some elections.

In midterm elections, these voters know the president and vote against his party. It is an odd regularity in America politics that the president’s party almost always loses in mid-term congressional elections, in part because this group of voters wants an opposition in Congress. But in a presidential election year, it’s much tougher to figure out how they will vote.

On Election Day, I will be most focused on voter turnout. Will the aftermath of (Hurricane) Sandy depress turnout in New Jersey, New York, and other hard-hit areas? Will younger voters turn out at the same levels as 2008? Will voter ID laws and the publicity around them depress turnout?