When Oliver Caplan ’04 returns to campus for the Handel Society of Dartmouth College’s performance on November 13, it will be a special occasion for the award-winning composer. Not only will he see old friends in the chorus he once sang with as an undergraduate, but the 100-member group will also premiere a work he wrote. 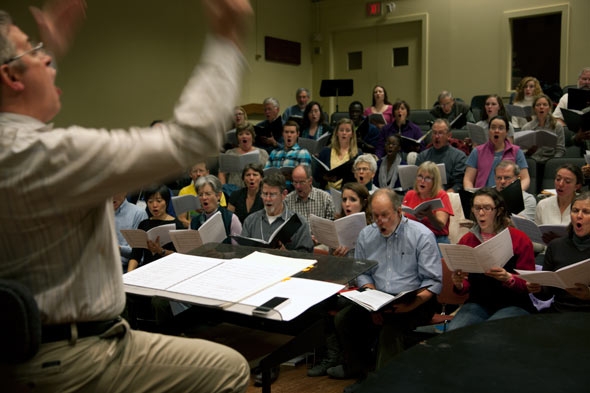 The Handel Society rehearses for the upcoming concert, “Away From Home.” (Photo by Martin Grant)

Caplan’s Roots & Wings was commissioned by Handel Society Director Robert Duff in honor of the Hopkins Center for the Art’s 50th-anniversary celebration. It will be performed in Spaulding Auditorium at 7 p.m. as part of a program entitled Away From Home, which also includes the great American composer John Corigliano’s Fern Hill.

Duff says he began corresponding regularly with Caplan about new music in 2007, which is when he began commissioning music annually for the Handel Society.

“Oliver composes beautifully lyrical melodies that are able to evoke emotional responses from singers and audiences alike,” says Duff. “And when plans for Dartmouth’s Year of the Arts and the Hop’s 50th anniversary were announced, it seemed fitting to invite Oliver to write a work for the Handel Society.”

A double major in geography and music who also earned a master’s degree in music from Boston Conservatory, Caplan describes Roots & Wings as a “meditation on Dartmouth as a place.” The Boston-based composer says, “There are certain visions—the afterglow of the setting sun shining across the Green—that one never forgets. One of my favorite things about the Dartmouth campus is the fluidity with which one can pass from the exciting social hubbub of central campus into tranquil nooks of nature: the river, the Robert Frost statue, the Bema, Pine Park. There is a feeling of natural spirituality in these hallowed spaces, and I tried to access that emotion while writing Roots & Wings.” 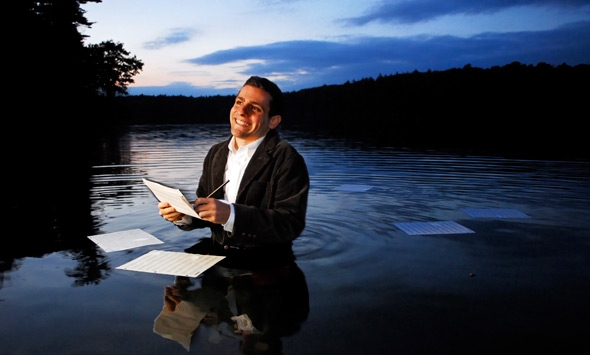 Composer Oliver Caplan was a double major in music and geography. His geography studies fed a love of nature and place that have remained important themes in his music. This image was taken at Walden Pond for the cover of his debut album, “Illuminations.” (Photo by Gabriel Miller)

Caplan’s work has been performed by ensembles at Harvard and Columbia universities, Washington & Jefferson College, and, on several occasions, by the Juventas New Music Ensemble, an acclaimed Boston group that only plays music by young composers. A trained pianist who admits that he enjoyed making up music more than practicing, Caplan recalls seminal experiences in the classroom with professors Steve Swayne and William Summers, as well as the Dartmouth Department of Music’s London Foreign Study Program. All inspired him to pursue a career in composition, he says.

Roots & Wings is a collaboration with Boston writer Meghan Guidry, who wrote an homage to Robert Frost in sonnet form, working from the idea of coming home to rural northern New England in fall. As ensemble Director Duff explains, “The four stanzas of the poem are separated by a refrain that echoes Dartmouth’s beloved motto, Vox clamantis in deserto. Oliver’s choice of instrumentation is the same as John Corigliano’s Fern Hill. This supports the possibility of pairing these works by other choral societies throughout the U.S.” 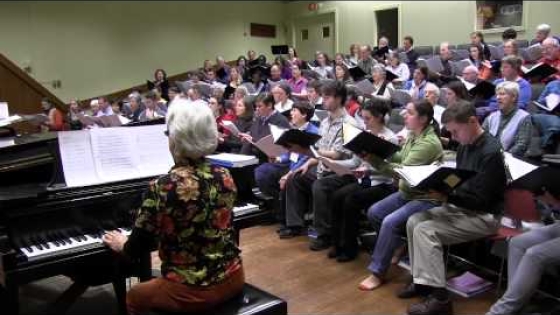 Caplan, who released his debut album, Illuminations, earlier this year (it’s available on iTunes and Amazon.com), says he is looking forward to the Handel Society’s performance. As he points out, the Handel Society includes faculty, staff, and community members, not just Dartmouth students. Many of the current members, including his friend Dave Robinson, a Lebanon, N.H., engineering consultant, were members of the ensemble when he was an undergraduate.

“I visited Hanover in mid-October to work with the Society,” Caplan says, “and after going over Roots & Wings, Robert Duff handed me a stack of scores and invited me to stay and sing for the rest of rehearsal. Dave Robinson, the tenor I used to stand next to senior year, pulled me to his side, and there we were, just like old times!

“This is my first commission from an ensemble that I used to be a member of, which has made the project a really special collaboration,” he says. “And I’m really honored to be able to give back to a community that meant so much to me as a student.”

Notable Performances and Recordings of 2021

Description
Work by music professors Richard Beaudoin and Ash Fure is highlighted in the magazine’s year-end review. Fure says, “I am drawn to sound because of sound’s ability to draw us into our bodies and into each other in radically present ways.”
Logo
Image