Kosovo’s Minister of Health Dr. Ferid Agani will be on campus November 12 and 13, meeting with students and faculty, touring Dartmouth facilities, and giving two public lectures. Agani aims to strengthen the relationship between Kosovo and Dartmouth as experts exchange ideas about medical systems and processes. His visit is sponsored by the Office of the Provost and the Dean of the Geisel School of Medicine at Dartmouth. 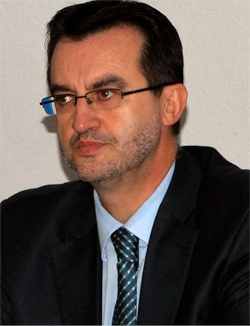 Dr. Agani has served as Kosovo’s minister of health since 2011. (photo courtesy of Ferid Agani)

“Dr. Agani’s visit is another milestone in the health care collaboration between Kosovo and Dartmouth,” says David Goodman, professor of pediatrics and community and family planning at the Geisel School of Medicine.

Agani, a psychiatrist, will deliver a lecture at the Dickey Center for International Understanding at 4 p.m. November 12 in Haldeman 041; he will also give a talk at 4 p.m. November 13 in Auditorium G at Dartmouth-Hitchcock Medical Center. Both lectures are titled “Rebuilding Medical Systems in a Post-Conflict Nation.” He will discuss the challenges Kosovo faced in trying to reform its health care system post-conflict.

“We are delighted to welcome Minister Agani to Dartmouth and especially eager to hear about the challenges and successes he has faced rebuilding a health care system in a new country, under post-conflict situations,” says Christianne Wohlforth, director of the John Sloan Dickey Center for International Understanding.

Agani previously served as a member of the Kosovo Parliament, as professor of psychiatry at the University of Prishtina, and as Chairman of the National Mental Health Council of Kosovo. Agani became the Minister of Health in 2011.

Dartmouth has had strong ties with Kosovo since the war with Serbia ended in 1999, first providing medical care in the war-torn region and later through a partnership with American University in Kosovo. Since ’99, Dartmouth has sent and hosted more than 200 faculty and students on medical exchanges with the country, and welcomed Kosovo President Atifete Jahjaga to campus in March 2012.