Northern Forests Are Threatened by the Southern Pine Beetle

The thought of global climate change conjures up images of coastal flooding and parched farmlands, but there is another sort of threat already upon us. As the environment warms, the destructive southern pine beetle has extended its range northward to include New Jersey’s prized Pinelands National Reserve. 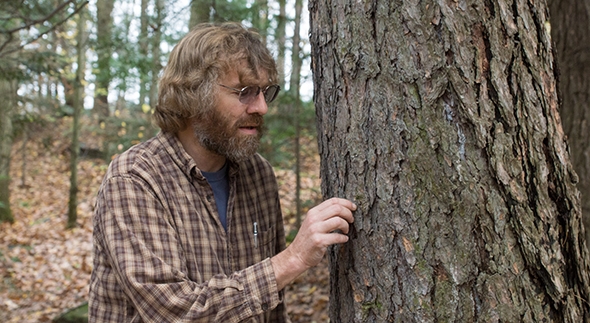 Professor Matt Ayres studies the southern pine bark beetle, a forest pest that may be the largest source of disturbance in coniferous forests throughout North America. (Photo by Eli Burakian ’00)

Its scientific name places this bark beetle in the genus Dendroctonus, which translates as “tree killer.” The beetle is about the size of a grain of rice and its life cycle is dependent on the death of its host tree.

Dartmouth Professor of Biology Matt Ayres, an expert in the bark beetle’s whys and wherefores, likens its predatory approach to that of wolves hunting a moose, where a larger number can do what a few cannot. “In all of nature, the ability of bark beetles to aggregate is exceptional,” says Ayres. “The dark magic of the bark beetles lies in their aggregation pheromones.” These excreted chemicals attract other members of the species, channeling an attack that focuses on only one tree, or only a few, at a time.

They bore through the tree’s bark and lay their eggs within the living tissue of the inner bark, disabling its function and bringing quick death to the tree. Tens of thousands of beetles may attack a single tree over a few days’ time while trees just a few meters away may be spared entirely. 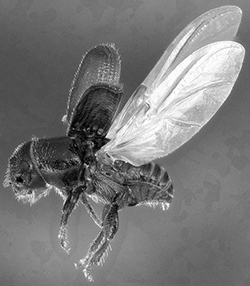 The predatory southern pine bark beetle, tiny as a grain of rice, is known scientifically as Dendroctonus frontalis. (Photo courtesy of Matt Ayres)

“Intermittent outbreaks frequently extend over multistate areas and can change vast acreages of forests permanently or in ways that take decades to get back to something like it was like before,” Ayres explains. “The impact from pine bark beetles in North America, including related species in the West, exceeds any other source of forest disturbance including wildfires.”

Ayres and his colleagues have long been trying to understand what influences the abundance and distribution of southern pine beetles. “I began working on these beetles with the U.S. Forest Service in Louisiana,” he says. “Then I came to Dartmouth and have continued to work on them ever since.  Sustained scientific studies of this system have made this a prominent international example of how climate change can permit the range expansion of important forest pests.”

The time-tested tactic for suppressing bark beetle infestations is to quickly remove infested trees from the forest. “The treatment—perhaps crude but demonstrably effective—is to find these local infestations when they are small [20 to 50 trees] and cut the trees down,” says Ayres. “Loggers haul them away, physically taking the beetles out of the forest where they die in mills or disperse as harmless individuals.” 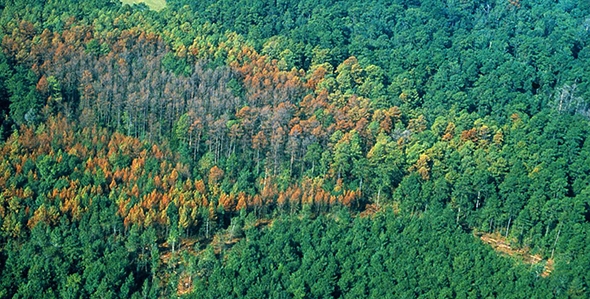 Clearly visible from the air, a section of forest is under attack from the southern pine bark beetle. (Photo courtesy Ron Billings, Texas A&M Forest Service)

Implementation of this “cut-and-remove” suppression practice, however, has sometimes met with resistance from well-meaning forest stakeholders. Ayres cites a case in Alabama, where public input halted suppression activities in the Bankhead National Forest.  “Later there was regret when these people realized that they had ‘lost the forest for saving the trees.’ That was only a couple of years in one modest-sized national forest, but was a microcosm of what goes on more broadly,“ Ayres says.

Now, to avoid a repetition in New Jersey, Ayres is advocating public education. Historically, management of the Pinelands Reserve has focused on preservation, but recent political support for public outreach, education, and engagement encourages Ayres.

”We are trying to help with the communication,“ he says. ”I’ve been doing it. My students have been doing it. The New Jersey Forest Service has been doing it.“ Ayres regards this as a ”teachable moment“ and an opportunity to manage our increasingly valuable forests in a changing world, and, more broadly, to understand the connections between forests, climate, and people.

”The expansion of the southern pine beetle into New Jersey is probably permanent,“ Ayres says. ”And it almost certainly demands some changes in forest management practices to sustain the attributes of this surprisingly large and wild ecosystem that are valued by millions of people.”

Ayres is hopeful about the future of the New Jersey Pinelands, as these forestlands face the challenges of both a changing climate and one of the most aggressive forest pests in the world.

“We are not all the way there yet,” he says,  “but it is important that we become better at adaptively modifying how we interact with forests, because climate change is altering the properties of forests throughout the world, even as it makes those forests increasingly important to human society.”