With the Christmas tree set up on the Green, Dartmouth is starting to get into the holiday spirit. Those who need a little more coaxing can climb aboard a ship of 82 Irish immigrants as they set sail for America. 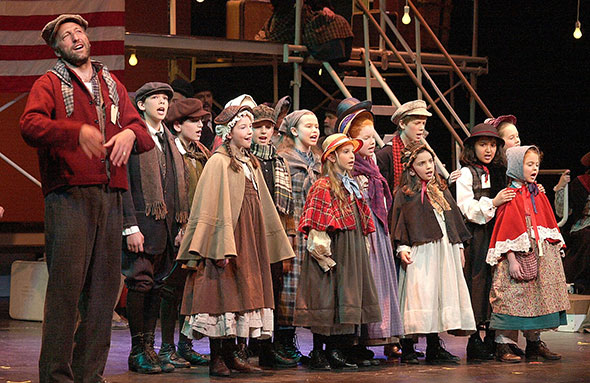 This year’s show will feature performers from the Upper Valley as well as professional artists and musicians. (Photo courtesy of the Hopkins Center)

The Christmas Revels: An Irish Celebration of the Winter Solstice, will show in the Hopkins Center’s Spaulding Auditorium from Thursday through Sunday, December 13 to 16. The production takes place in 1907 aboard a ship traveling from Ireland to America and features professional performers as well as adults and children from throughout the Upper Valley.

Artistic Director Maureen Burford says she wanted to focus the show on Ireland and Irish traditions, and later thought of having the ship as the setting.

“It is a perfect venue, with the boat as a metaphor for the community that formed in the face of challenges,” says Burford.

Now in its 38th year, Christmas Revels takes audiences to different times and cultures through music, dance, and holiday traditions. Recent productions have been set in Elizabethan England, medieval France, Appalachia, and Quebec.

One of the reasons she wanted to put on this production, Burford says, was because she felt many Americans’ heritage is connected to immigration. “I wanted to do it because our country is filled with stories like this.”

Rebecca Bailey, publicity coordinator for the Hop, notes that the production is a major event in the Upper Valley.

“Christmas Revels is seen each year by thousands of people—one of the largest audiences for any performing arts event in the Upper Valley,” says Bailey. “This year’s show tells a story that anyone with immigrants in their family history can relate to, and features a beautiful selection of Irish music as well as a very special dance tradition called sean nós, Gaelic for ‘old style.’”

This year’s production has well-known professionals helping put on the show. Helena Binder, a nationally recognized stage director for opera, is the stage director, and University of Vermont Theatre Professor and Resident Scenic Designer Jeffrey Modereger is designing the set.

The professional musicians working in this production, says Burford, are world-renowned in their fields. The guest performers include artists Kieran Jordan, a Boston-based dancer who is performing and choreographing for the production, fiddler Laura Risk, flutist Nicholas Williams, piper Joey Abarta, and guitarist and percussionist Paddy League.

To buy tickets and for more information on events leading up to the production, such as Irish dance workshops and Irish music performances, visit the Hop’s website.