In his commentary in the Proceedings of the National Academy of Sciences (PNAS), Dartmouth anthropologist Nathaniel Dominy draws attention to important new findings by an international team of paleoanthropologists. The findings, based on measurements of stable carbon isotopes in the tooth enamel of an enigmatic early human ancestor called Australopithecus bahrelghazali, are also presented in PNAS. 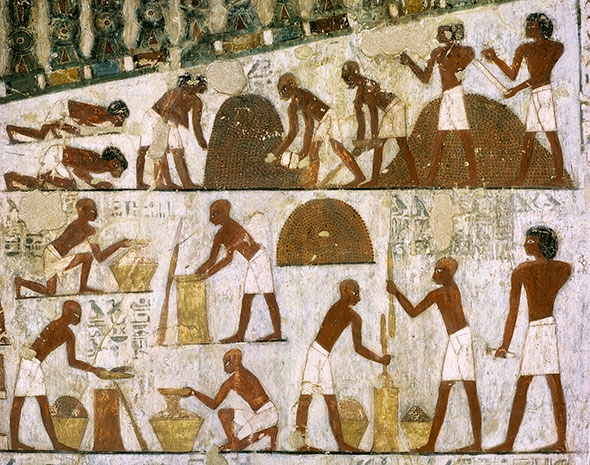 A painting in the tomb of the 18th Dynasty Egyptian Rekhmire (ca. 1504-1425 B.C.E.) illustrates the processing and measurement of C. esculentus, a C4 crop under cultivation in ancient Egypt. (Photo ©2001 Francis Dzikowski/Esto, www.fdphoto.biz)

The research paper by Lee-Thorp et al. posits an early dietary shift to a category of plants that use a specialized form of photosynthesis known as C4. Today, humans regularly consume C4 plants such as corn and sugar cane, but these foods require sophisticated processing abilities that were unavailable to early hominins. It is therefore surprising that a shift to C4 plants could have occurred more than 3 million years ago, doubling the previously held age of this significant event. Such a shift is likely to reflect a profound change in ecology and behavior.

Documenting the interplay of environment and diet in our distant past may help us understand when, how, and why the human lineage evolved. The highlights of human evolution—our means of locomotion, our large brains, and our complex social behavior—are probably linked in large part to the ecosystem and available food choices on the landscape. 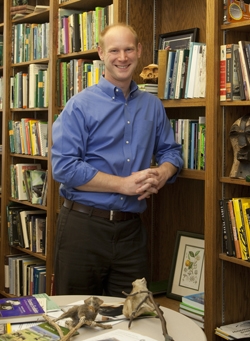 The strata in which Australopithecus bahrelghazali and other fossils were found point to an ecological setting of “open to wooded grasslands and stream channels associated with a greatly enlarged Lake Chad,” according to the PNAS research paper. “In such an environment, the most abundant C4 plant resources were grasses and sedges, neither of which is usually considered as standard great ape fare. The results suggest an early and fundamental shift in hominin dietary ecology that facilitated the exploitation of new habitats,” the authors write.

“Today, C4 plants account for a quarter of the primary productivity on the planet,” writes Dominy, an associate professor of anthropology at Dartmouth. “A few C4 plant species contribute significantly to the human diet, either directly as domesticated cereals or indirectly via animals raised on C4 crops and pastures.” In fact, the ancient Egyptians intensively cultivated a C4 plant species, Cyperus esculentus, as a food crop, he notes. 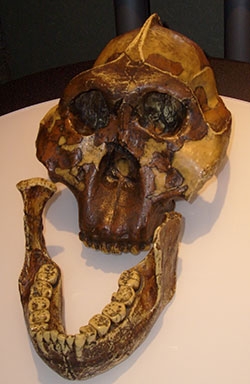 The robust teeth and jaws of our human ancestors from about 1.5 million years ago, as shown in Paranthropus boisei from Tanzania, are associated with a diet of C4 plants such as sedges. (Photo courtesy of Wikipedia Commons)

Dominy points out that the more robust teeth and jaws of our human ancestors from about 1.5 million years ago, such as Paranthropus boisei from Tanzania, are also associated with a diet of C4 plants such as sedges, in which the prize was likely the starch in the pith and underground corms (the enlarged, fleshy, bulblike base of a stem, as in the crocus).

“A diet premised on pith is expected to require laborious loading of the jaws and teeth, a behavior that could have favored the evolution of massive chewing muscles, such as those of P. boisei. Pith is also soft and unabrasive, traits that correspond to the molar microwear of P. boisei,” Dominy writes.

Dominy notes that the jury is still out on the precise components of the prehistoric diets, but the research team has “thrown a spotlight on the importance of sedges in hominin evolution.” In sum, he states that “a collaborative focus on the nutritional composition, isotopic ecology, and mechanical properties of sedges could prove very instructive, and researchers in the disciplines of primatology, human ecology, and paleoanthropology are well poised to collect these data.”