To coincide with the opening of the Black Family Visual Arts Center on September 14, artwork by 14 alumni was shown in the first Invitational Dartmouth Alumni Exhibition in the Center’s Nearburg Gallery and in the Top of the Hop at the Hopkins Center for the Arts. 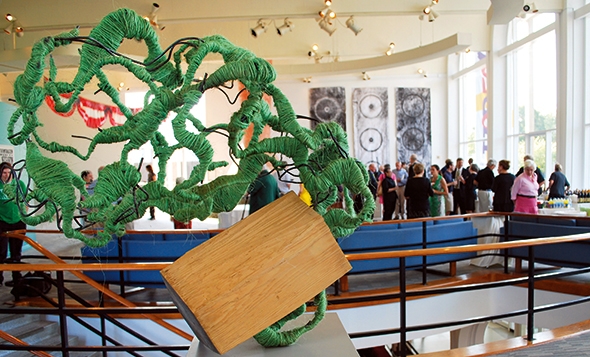 “For the opening of the Black Family Visual Arts Center and the 50th anniversary of the Hopkins Center, as well as Dartmouth’s Year of the Arts, what better way to celebrate than to feature alumni artists?” says Professor of Studio Art Brenda Garand, who organized the exhibit. “Hood Museum of Art Director Michael Taylor and Jeff James, the Howard Gilman Director of the Hopkins Center for the Arts, have supported this since the beginning, and Essi Rönkkö, coordinator for the Year of the Arts, helped with every aspect of the exhibition. Of course, there are hundreds of alumni artists, and only a limited amount of space for this exhibition. So we are hoping that this is only the beginning of more exhibitions to come.”

Scott Listfield ’98, one of the exhibiting artists, said of the exhibition, “I think it’s important for students studying art, or anything, for that matter, to understand that their education doesn’t end once they graduate; that Dartmouth will continue to support them once they’re gone.”

Here, the artists talk about their work in the exhibition, which ended December 1.

Brooklyn, N.Y., artist Genadry, who was born in Lebanon, found inspiration for her piece (oil and acrylic paint on wood panel) in research she did on an extinct train line in her native country. “I followed the old route from the Port of Beirut to the Riyaq Valley. It doesn’t run anymore, but I traced the old tracks and found the stations and photographed them. I then spent a year creating a body of work that recollected that journey through different media,” she says. 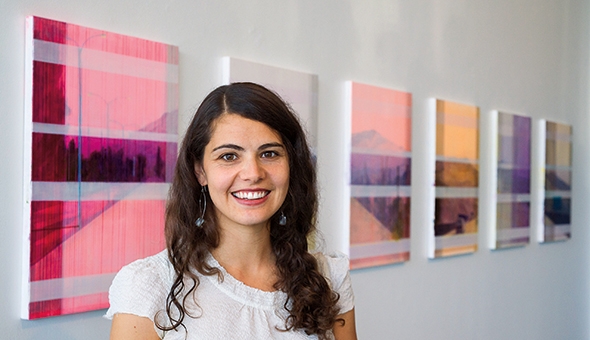 Daniele Genadry ’02 found inspiration for her 2012 work “Afterimage (The Road to Riyaq),” pictured on the wall behind her, while doing research in her native country of Lebanon. (Photo by Eli Burakian ’00)

“Action for the Delaware was inspired by the Taoist concept of wu-wei, or non-doing,” says Lamson, who lives in Brooklyn, N.Y. “I really like the idea of giving up control and allowing my journey downstream to be determined by the current and course of the Delaware River. ...  The piece, of course, did not turn out exactly as I had planned, as the river was too shallow and the current too fast for me to remain standing on the apparatus for the entire journey. As a result, the video oscillates between the illusionist moments in which I appear to stand on the surface of the river effortlessly gliding downstream, and the moments in which my flotation device is plainly visible as I struggle to push it through shallow areas.”

Arad, an architect who lives in Douglaston, N.Y., is best known for designing the World Trade Center memorial, Reflecting Absence, a pair of reflecting pools that mark the spot of the fallen twin towers in New York City. Of his work in the Dartmouth show, a digital print, Arad says, “My piece, TBD, came out of a difficult period of struggle in my life and creating it was an introspective and meditative act. I think art allows us at times to see the world through another person’s perspective and form a shared understanding. I hope that people will be able to connect to that in seeing my piece.”

Houston runs Cannonball Press in Brooklyn, N.Y. He says of Professor Stoomvagen, a woodcut on canvas, “This piece is part of a larger body of work depicting sideshow imagery, which as a whole is an allegory for the chicanery of modern politics. I hope people can enjoy my work on a number of levels—for its silliness, its craftsmanship, and its portrayal of timeless themes, common to many.”

“With Back-to-Front, I am examining my relationship with the environment, family, mythology and where they intersect,” says Jacobs of her wall sculpture. The exhibitions coordinator for AVA Gallery in Lebanon, N.H., Jacobs, of Enfield, N.H., cites Professor of Studio Art Brenda Garand as a major influence. “Narrative plays a large role in my work as well as how memory changes to shape the perception of events and objects.”

Taylor, who lives in Houston, Texas, says her bronze sculpture Manos de Miedo/Scary Hands was made “when I first started dating my husband, who is from the north of Spain. The stick that modeled the sculpture body was found on a hike in the Adirondack Mountains near my family’s farm. The tree pods that made the hands were procured on a run through the Parque del Retiro in Spain. I brought them together to signify the coming together of the two cultures. And the ‘scary hands’ are removable for easier transport—and in case of relationship failure.”

Made of wood, steel and baling twine from hay bales used to feed her family’s beef cattle, Entwined is part of Morel’s “Thought House” series. In this sculpture the “thought” threatens to lift the house off the ground and carry it away, says Morel, who lives in Barnard, Vt. She cites Studio Art Professor John Lee and retired Professor Varujan Boghosian as particularly inspiring.

“My piece is made out of banner vinyl. I had these images of smiles printed on the banner, front and back. The idea was that when you smile, your mouth turns up on both sides, and when you create bunting, it does the same thing structurally that a smile does. So I was playing with that structural situation. And I wanted it to be fun and be something that you smile at when you look at it. But then you can also wonder if it’s a sincere thing or ironic. I like to have it play between the sincerity and irony,” Ruth says. 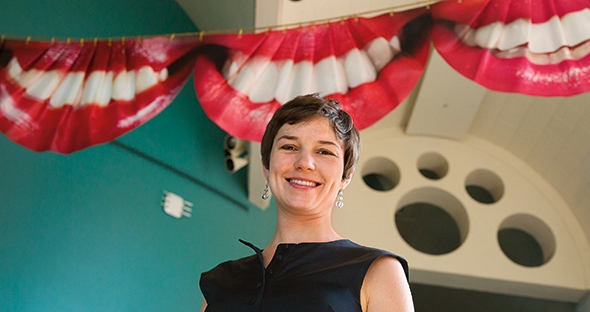 “My wall sculpture, Dentata, references the myth of the ‘vagina dentata,’ i.e. ‘toothed vagina,’ which castrates the men who dare try to penetrate it,” says Koh, of Brooklyn, N.Y. “My work often references sexuality and feminist tropes, but with a sense of humor and contemporary sensibility reflective of complex emotions and beliefs.”

O’Rourke’s drawings are process based; he uses physical objects and charcoal to alter the surface of the paper, creating prints of recognizable forms. Once Again is part of a series of large charcoal drawings done by the artist, who lives in West Rutland, Vt.

“Most of my work is about the art world—it’s ironic, more poppy and funny, so this is a very unusual piece for me,” says Ramocki, who lives in Brooklyn, N.Y. “Wakeless GIFs is a video piece about nature and being quiet, so it fit well with being in New Hampshire and at Dartmouth. It’s based on found animated GIFs, which I modified.” (GIFs are a form of a computer image that moves as an animation, like a movie with no sound.)

Collins-Fernandez, who lives in New York City, says of her dark blue crushed velvet and paint piece, “It’s about how to contend with what painting means, and opticality and materiality, and paint as it functions like a substance. The paint emulates the light on the folds and the texture of the velvet surface as, simultaneously, light transforms the materials into a painterly field. This unending play both interrupts the wall and is contained by it. It’s a pretty minimal piece. It doesn’t look that complicated. There’s a relationship with the wall.”

Listfield, who lives in Somerville, Mass., says his oil on canvas is “from a series of 110 pieces I’ve done featuring the astronaut from the film 2001. He serves as an explorer in the real 2001, which is not at all like the future I envisioned in my childhood, growing up watching science fiction films. What happens in the mundane, everyday life of people who have robots? They probably get parking tickets. Humor is a big element in my work.”

“Untitled is a site-specific installation consisting of multi-colored screen-printed and spray-painted aluminum tiles, each 12 by 12 inches,” says Brown, of New York City. “Alternately referencing invented landscape, baroque minimalism, and Pop art, this is part of an ongoing, long-term project of creating modular works that can be dispersed and reassembled in any configuration on any scale, at any time, in any location.”