When Dave Seliger ’12 applied for a Dartmouth Lombard Fellowship, he figured a good place to do emergency response work was New York City. He had no idea he would respond to the greatest natural disaster the city has faced in decades. 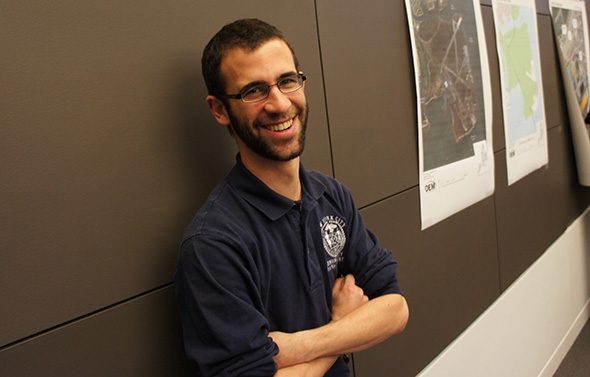 “My logic was that if I wanted to get experience in emergency response, New York City was the place to go,” says Seliger. “Truly unfortunately, I was correct.”

Seliger, who is supported by a Richard D. Lombard Public Service Fellowship, works for the New York City Office of Emergency Management. This put him squarely in the crosshairs of Superstorm Sandy, as he helped direct the emergency response to the storm that smashed the Eastern Seaboard this fall.

The Lombard Fellowship program is run by the John Sloan Dickey Center for International Understanding and the William Jewett Tucker Foundation; eight to 12 graduating seniors and first-year alumni are awarded up to $15,000 for six-month to one-year service projects. Lombard was a member of the class of 1953 and served as a Dartmouth trustee from 1971 to 1981.

Amy Newcomb, student programs officer for the Dickey Center, says the program is a great way for alumni to apply their Dartmouth education to real world issues.

“The Lombard Fellowship is truly an amazing resource that allows our recent graduates to undertake substantive and meaningful projects with great impact to the communities they serve,” says Newcomb. “For many, taking on these public service projects wouldn’t be possible without the fellowship funds to support them.”

Seliger, who became interested in emergency response after volunteering for a fire department, was busy in the days before and after Sandy. His duties included planning logistics and communicating preparation and relief efforts. Three nights before the storm touched down in New York, Seliger and his co-workers began determining which public schools would open as shelters and which supplies were needed at each, he says. Once the storm hit, Seliger hunkered down with about 40 other members of his team in an empty warehouse that they used as a home base to coordinate relief efforts.

“Eight million people were facing total disaster,” says Seliger. “I can’t put into words how stressful the situation was.”

The situation forced him to work in the warehouse for almost two weeks. There he spent up to 17 hours a day helping to direct supplies and people. At night, he slept on a cot. With people poring over data on computers, Seliger says, the warehouse resembled a NASA mission control room. Despite the stress, he was glad to have had the experience.

“The last thing you want,” he says, “is someone designing a disaster response system who has never experienced a disaster.”

He believes Dartmouth prepared him well for the circumstances, and he is grateful for the opportunity provided by the Lombard Fellowship. Reflecting on Sandy, Seliger calls the ordeal “overwhelming, scary, exciting, and invigorating.”

“You’re put in an impossible situation,” he says, “and you try to make the best of it.”