In a city better known for cover-to-cover readings of James Joyce’s 20th-century epic Ulysses, Dartmouth professor Tom Luxon will be joining a start-to-finish recitation of John Milton’s monumental Paradise Lost at Trinity College Dublin on December 14, 2012. It will be, the organizers note, Ireland’s first-ever public marathon reading of the 17th-century poem’s more than 10,000 lines. 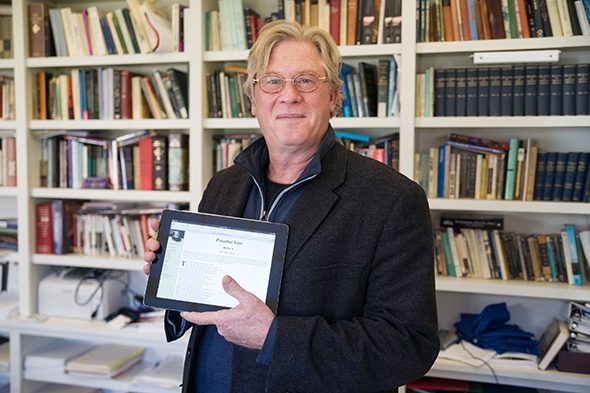 Dartmouth professor Tom Luxon is the scholar behind the Milton Reading Room, a digital humanities project started at Dartmouth in 1997. (Photo by Eli Burakian ’00)

Luxon, professor of English, Cheheyl Professor, and director of the Dartmouth Center for the Advancement of Learning (DCAL), is the scholar behind the Milton Reading Room, a digital humanities project launched at Dartmouth in 1997.

“The Milton Reading Room continues to have an impact on the digital humanities at Dartmouth and beyond,” says Laura R. Braunstein, Dartmouth’s English language and literature librarian. “It was one of the first scholarly editions of an English author freely available on the web, and was groundbreaking in taking advantage of web structure (such as linking and searching) to enhance both students’ and scholars’ reading experience.”

Dartmouth undergraduates have been part of Luxon’s research team from the project’s beginning, Braunstein points out, “giving them an opportunity to see their learning have an impact beyond the classroom and into the wider scholarly community of Milton studies.”

Widely linked to by academic library sites, the Milton Reading Room is one of the most visited destinations on Dartmouth’s website, www.dartmouth.edu. During the first week of December, Luxon says, the site answered between 12,000 and 18,000 page requests per day. 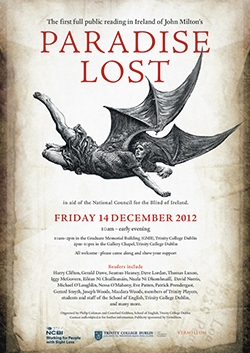 “I adore the fact that so many thousands of people want to re-acquaint themselves with Milton and the 17th century in general, the age of the first great wave of modern science,” Luxon says. In the section of Paradise Lost he reads in Dublin, Luxon continues, “Milton speculates about the new view of the cosmos prompted by Galileo—a heliocentric system—and worlds populated by other beings. The 17th century and Milton, in particular, represent the birth of modern consciousness, scientifically, politically and religiously. Milton could not know it, but his re-definitions of marriage paved the way for same-sex unions, and his religious heterodoxies paved the way for modern agnosticism.”

Luxon is no stranger to Paradise Lost marathons, having organized one at Dartmouth in 2008 to mark Milton’s 400th birthday. One of the Dublin reading’s organizers, Philip Coleman of the School of English at Trinity College, was “one of our readers of Paradise Lost in 2008, and was a visiting professor in the Department of English for fall term 2012,” says Luxon.

Milton published Paradise Lost in 1667. The poet dictated his text, having lost his sight in 1652. The Dublin event is a benefit for National Council for the Blind in Ireland.