Did Lucy Walk on the Ground or Stay in the Trees?

Much has been made of our ancestors “coming down out of the trees,” and many researchers view terrestrial bipedalism as the hallmark of “humanness.” After all, most of our living primate relatives—the great apes, specifically—still spend their time in the trees. Humans are the only members of the family devoted to the ground, living terrestrial rather than arboreal lives, but that wasn’t always the case. 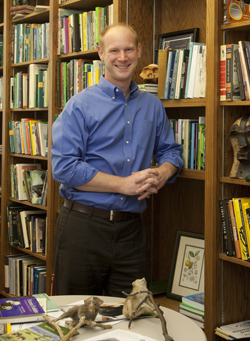 Associate Professor of Anthropology Nathaniel Dominy looks to modern humans to inform his study of locomotion in our fossil ancestors. (Photo by Joseph Mehling ’69)

The fossil record shows that our predecessors were arboreal habitués, that is, until Lucy arrived on the scene. About 3.5 million years ago in Africa, this new creature, Australopithecus afarensis, appeared; Lucy was the first specimen discovered. Anthropologists agree that A. afarensis was bipedal, but had Lucy and her legions totally forsaken the trees? The question is at the root of a controversy that still rages.

“Australopithecus afarensis possessed a rigid ankle and an arched, nongrasping foot,” write Nathaniel Dominy and his co-authors in Proceedings of the National Academy of Sciences (PNAS). “These traits are widely interpreted as being functionally incompatible with climbing and thus definitive markers of terrestriality,” says Dominy, an associate professor of anthropology at Dartmouth.

But not so fast; this interpretation may be a rush to judgment in light of new evidence brought to light by Dominy and his colleagues. They did what anthropologists do. They went out and looked at modern humans who, like Lucy, have feet adapted to terrestrial bipedalism, and found these people can still function as effective treeclimbers. 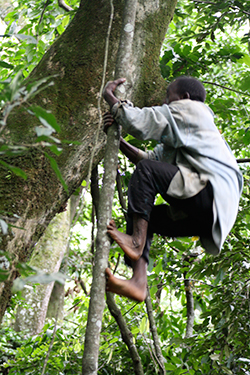 Co-authors Vivek Venkataraman and Thomas Kraft collaborated with Dominy on field studies in the Philippines and Africa that inform their PNAS paper. Venkataraman and Kraft are Dartmouth graduate students in the Ecology and Evolutionary Biology PhD program in the Department of Biological Sciences, and are supported by National Science Foundation graduate research fellowships.

The studies in Uganda compared Twa hunter-gatherers to their agriculturalist neighbors, the Bakiga. In the Philippines, the researchers studied Agta hunter-gatherers and Manobo agriculturalists. Both the Twa and the Agta habitually climb trees in pursuit of honey, a highly nutritious component of their diets. They climb in a fashion that has been described as “walking” up small-diameter trees. The climbers apply the soles of their feet directly to the trunk and “walk” upward, with their arms and legs advancing alternately. 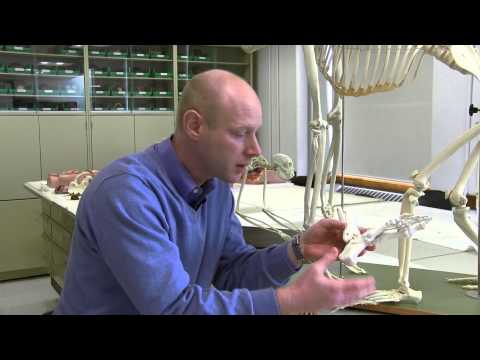 Among the climbers, Dominy and his team documented extreme dorsiflexion—bending the foot upward toward the shin to an extraordinary degree— beyond the range of modern “industrialized” humans. Assuming their leg bones and ankle joints were normal, “we hypothesized that a soft-tissue mechanism might enable such extreme dorsiflexion,” the authors write.

They tested their hypothesis using ultrasound imaging to measure and compare the lengths of gastrocnemius muscle fibers—the large calf muscles—in all four groups—the Agta, Manobo, Twa and Bakiga. The climbing Agta and Twa were found to have significantly longer muscle fibers.

“These results suggest that habitual climbing by Twa and Agta men changes the muscle architecture associated with ankle dorsiflexion,” write the scientists, demonstrating that a terrestrially adapted foot and ankle do not exclude climbing from the behavioral repertoire of human hunter-gatherers, or Lucy.

In their conclusions, the Dartmouth team highlights the value of modern humans as models for studying the anatomical correlates of behavior, both in the present and in the dim past of our fossil ancestors.