Exploring the Arts in Class, on Stage, and Across the Globe

Dartmouth offers dozens of opportunities for students to engage in its vibrant arts culture—whether in the classroom, on the performance stage, or across the globe.

“Dartmouth is simply an outstanding place to study the arts,” says Adrian Randolph, associate dean of the faculty for the arts and humanities, and the Leon E. Williams Professor of Art History. “We have gifted practitioners who mentor students in all media. What is more, we match such creativity with up-to-date interpretations that help students understand art through time and around the globe.”

In the 2011-12 academic year, 2,383 students enrolled in film studies, music, theater, and studio art courses. Dartmouth will offer 71 courses in these subjects for winter term 2013. Still more students will craft novellas in a creative writing course, create animation in a computer science class, or study ancient Greek architecture in an art history course.

Many majors can be modified at Dartmouth—meaning that the main course of study is supplemented by another discipline—and this promotes interdisciplinary learning and gives students different, fresh ideas on their major. Recent graduates have modified an engineering major with studio art, an English major with film studies, and a computer science major with digital arts.

The arts at Dartmouth extend beyond the classroom: With Foreign Study Programs, students have recently traveled to Scotland for the Edinburgh International Film Festival, to Vienna to study music, and to London to work at the famed London Academy of Music and Dramatic Art. Dartmouth also brings the world to campus, as outstanding artists visit Hanover through residency programs.

Always committed to arts education, Dartmouth is showcasing student work during the Year of the Arts celebration through student exhibitions, theater productions, and musical performances.

Here, six undergraduate students talk about lessons they have learned and extraordinary experiences they’ve had while studying the arts, both formally and informally, at Dartmouth. 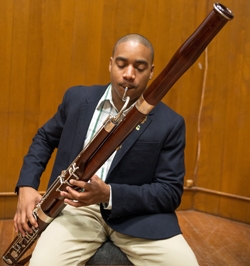 Kevin Gillespie Jr. ’15 is an English major with a minor in sociology. (Photo by Eli Burakian ’00)

Gillespie, who is from Baltimore, Md., is the principal bassoonist in the Dartmouth College Wind Ensemble. An English major with a minor in sociology, Gillespie is an example of the many non-major students who contribute to the arts at Dartmouth.

Gillespie says music has taught him lessons that transcend the classroom, as he learned “to remain humble and receive constructive criticism.”

During his freshman year, Gillespie invited a friend who had never been to a classical performance to a Dartmouth College Wind Ensemble concert. “He was amazed with the experience of seeing a live performance,” says Gillespie, “and I was thankful that I was able to share my passion for music through my performance.” 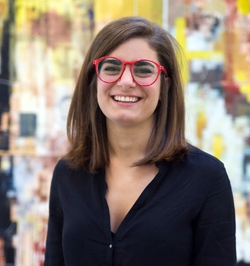 A studio art major from Jersey City, N.J., Molnar has thoroughly enjoyed the close-knit community of artists on campus; she says there is a high level of respect and enthusiasm for the work among Dartmouth artists.  “The professors, the interns, and fellow majors and students are so willing and eager to discuss your work, process, and life as an artist,” she says.

“Separating art from my Dartmouth experience is impossible,” says Molnar, who is a sculptor and painter.

“Nearly every significant personal and intellectual stride I have made during my college years has come about because of the process of making art.” 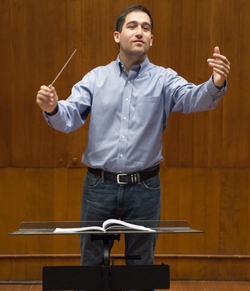 From majoring in music to performing as the principal tuba player in the Dartmouth Symphony Orchestra and Dartmouth College Wind Ensemble to directing the a capella group the Dartmouth Brovertones, Finkelstein is one busy musician. This involvement has not limited his overall academic experience, though. “I have found that the more music I have been involved with, the less stress I carry with me from day to day,” says Finkelstein, who is from Greenwich, Conn. Throughout his time at Dartmouth, Finkelstein has been impressed by the commitment to students in the arts. “When a student expresses an interest or a passion in the arts,” he says, “faculty and staff will move mountains for them.” 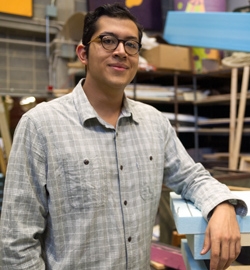 Gabriel Rodriguez ’13 is a theater major. (Photo by Eli Burakian ’00)

Rodriguez, a theater major from Aurora, Colo., dedicates much of his time to productions: He builds and designs sets; he has served as a technical director for a student play; and he directed his first show this fall. He spent this past summer in London as part of the theater department’s Foreign Study Program, which he called an “absolutely invaluable experience,” as he worked with “some of the most talented actors I have ever seen.”

“I think that we as a College are committed deeply to the arts,” Rodriguez says.  “It is fair to say that the arts have been the single most formative aspect of my time here.” 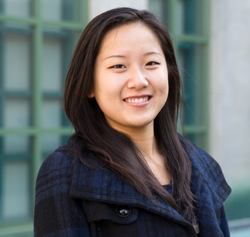 Xinyue Guo ’14 has a double major in art history and mathematics. (Photo by Eli Burakian ’00)

“Art history has shaped my Dartmouth experience,” says Guo, who is from Suzhou, China.  A double major in art history and mathematics, Guo has served as a curatorial intern at the Hood Museum of Art, has worked at the Off-Campus Programs office, and is involved with the Chinese Dance Troupe. She believes the Hood’s “fabulous collections” are a great asset for students, as professors can discuss art history theories through analyzing artwork that is housed there.

“I think Dartmouth is making a great effort to improve its art education and art atmosphere,” says Guo. “I am really excited to see the changes.” 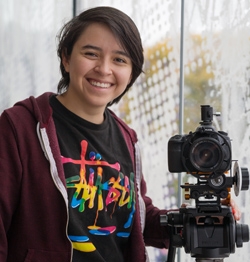 “I really can’t imagine my Dartmouth experience without the film department,” Rojas says. She was born in Cuernavaca, Mexico, grew up in Illinois, and is majoring in film studies modified with studio art. She edits videos for the Dartmouth Media Production Group, works as a teaching assistant for filmmaking classes, and has interned with a local documentary filmmaker. Rojas says her professors have provided tremendous support in her studies and with career advice. “I have been lucky enough to find something that I really love doing academically and something that I want to continue doing after I graduate.”