Russell Muirhead is the Robert Clements Associate Professor of Democracy and Politics in the Department of Government. He is currently at work on a book about partisanship entitled A Defense of Party Spirit, and is the author of Just Work (Harvard University Press, 2004). Before coming to Dartmouth in 2009, Muirhead taught at the University of Texas at Austin, Harvard University, and Williams College. Muirhead was educated at Harvard and Oxford University, and teaches courses in American political thought, the history of political philosophy, and the ethics of market society. 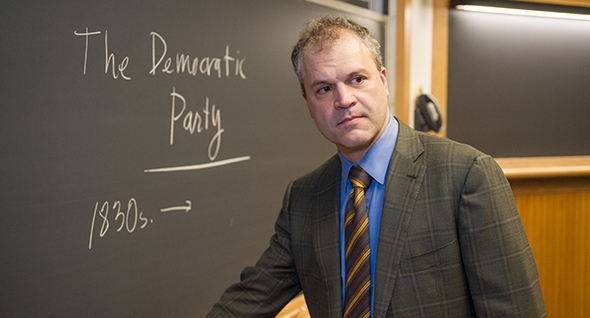 Russell Muirhead is the Robert Clements Associate Professor of Democracy and Politics in the Department of Government. (Photo by Eli Burakian ’00)

The approval rating for Congress is in single digits and there’s a perception among many voters that Congress is broken. What are your thoughts?

People often say that Congress is broken because it’s become so much more partisan than it used to be. I think the polarization of Congressional parties can be helpful. Where the parties once echoed each other, today they clarify fundamental and important choices about the goals we want the government to serve. The challenge, when the parties really do stand for something distinct, is to rediscover the art of compromise. That’s what’s been missing for the last two years. What we need is not less partisanship, but more compromise.

But a lot of politicians seem to believe they can’t compromise if they want to get re-elected. Hasn’t this been the case in recent elections?

Yes—especially if you’re a Republican. Over the last two years, Republicans have feared a Tea Party challenger who knocks them out in the Republican primary. And for that reason many Republicans in Congress were terrified of agreeing with Democrats about anything. But I think the electoral logic has changed. And I think there are a few Republican Congressmen who probably still would have their seats right now if they had been more compromising, including the two Republican Congressmen from the state of New Hampshire. It’s possible to relax your principles without betraying your principles.

What’s lacking right now is mutual respect between party leaders. Amy Gutmann, president of the University of Pennsylvania, and Dennis Thompson at Harvard just published a very good book called The Spirit of Compromise. And in that book they explain how a certain kind of mutual respect is necessary to produce valuable but difficult compromises in politics.

A good start might be something as simple as speaking publicly about a political opponent’s qualities in an admiring and appreciative way. For instance, President Obama could utter a few positive things about the virtues of Republicans in Congress. He doesn’t have to believe it; he just has to say it. And in turn, Speaker of the House John Boehner could say something about Obama or even the Congressional Democrats that is appreciative. It can be surprising how far a little flattery will go toward producing a spirit of mutual respect.

Has the art of crossing the aisle and brokering deals been lost? It seems that now there aren’t many politicians in the mold of former U.S. senators Richard Lugar or Ted Kennedy.

Richard Lugar was particularly good at working with Democrats to get things done, most notably the 1991 Nunn-Lugar Act, which secured and limited nuclear weapons in the former Soviet states. And Teddy Kennedy is a great example of how being a real partisan is not inconsistent with coming together with people you disagree with for the sake of governing. No one symbolized what it meant to be a liberal Democrat more forcefully than Ted Kennedy. He was reviled by conservatives and adored by liberals, but he could convey a sense of respect for his political opponents that made it possible, on occasion, for him to work constructively with opponents—not just Republicans, but conservatives.

What will be the keys to Obama having an effective second term?

The dilemma for Obama is that liberals in his own party are feeling resurgent. They feel like they won the election. Meanwhile, Republicans in Congress feel like they won the election. Bringing these two groups together will take a level of engagement and a personal touch that Obama doesn’t seem to have invested himself in over the last four years. I think he now might understand how necessary it is.

It will be tempting to sidestep that by legislating independently through things like executive orders. But to truly be successful, presidents have to persuade: Obama’s legacy depends on his capacity to inspire or to hammer out legislative coalitions on two or three crucial problems that face the country.

On what issues is Congress most likely to cooperate?

Immigration. It was last attempted in 2007, and leaders in the Republican Party now understand that if they had passed comprehensive reform then, they would have had a better chance in 2012 of winning the presidency.