When a group of graduate students filmed a response to a controversial video about women in science, they never expected that their video would catch the eye of The New York Times, The Boston Globe, and the European Commission.

“We thought, if nothing else, maybe we could show the video to a Dartmouth class,” says Jessica Trout-Haney, one of the scientists featured in the film.

A post was published this week on The New York Times blog Dot Earth, featuring the Dartmouth IGERT-produced video, Science in Greenland: It’s a Girl Thing. The one-minute, 35-second film was a response to a video that had been posted on a European Commission website and called Science: It’s a Girl Thing! The E.C. video was part of a well-intentioned campaign to interest girls and young women in science. After the video was met with resounding criticism, the E.C. took it off the website.

The Dartmouth video has garnered international attention and a response from the European Commission. The students were doing fieldwork in Greenland when they watched the E.C. video—which features scenes of three women in short skirts, lipstick, and high heels interspersed with a scene showing one male “real scientist”—and filmed their response. The Dartmouth video has shots of the students hard at work, collecting snow and soil samples, taking notes against a backdrop of the landscape of Greenland. 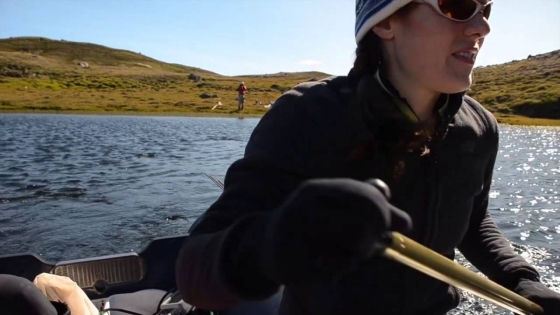 Ross Virginia, the Myers Family Professor of Environmental Science and director of the IGERT program, says the video has “energized the ongoing debate about how to attract young women to science and how to support rewarding career paths for them.”

Calling the E.C. video a “misguided attempt to get girls interested in science,” Boston Globe blogger Carolyn Y. Johnson wrote that the Dartmouth video “trades the preposterous club-like atmosphere of the original video for the scenic views and the gritty reality of field work in Greenland: boots, dirt, snowflakes, and all.”

By December 21, the Dot Earth blog had received 29 responses to the post, one of which came from the European Commission.

“We are glad to see another video made by young women to encourage girls to take up science,” writes the E.C.’s Science: It’s a Girl Thing! Campaign Team. The post continues: “To be fair, having such a controversial video was not our original intent. … However, if there is one positive thing to have emerged, it is the wider debate on women in science that it has provoked.”

Trout-Haney says she appreciates the comment: “I thought it was a really reasonable statement that they responded with.”

Virginia says he is delighted that this issue has sparked a media discussion.

“I’m thrilled that the IGERT remake has attracted wide attention and is encouraging people to talk more about how we can make science, engineering, and medicine exciting professions for women,” he says.

Trout-Haney, a second-year PhD student in the ecology and evolutionary biology program, says the title “Science: It’s a Girl Thing!” gradually became a soundtrack for their trip. The students repeated the line when they needed motivation or after accomplishing a goal. Eventually, the group started to plan time at the end of the day to film small bits for the video, hoping it might generate discussions about women in scientific fields. But did they expect this much interest? Not exactly.

“We just wanted to draw attention to an alternative way to be a strong female and do science,” says Trout-Haney.

“We can still be fun, social women who enjoy lots of adventures and laughs in the field,” says Lee Corbett, another IGERT Fellow featured in the film. “But at the end of the day, we’re all doing serious scientific research and making meaningful contributions to our fields.”