Dale F. Eickelman, the Ralph and Richard Lazarus Professor of Anthropology and Human Relations, was elected president of the Tangier American Legation Institute for Moroccan Studies (TALIM). “Dale Eickelman, our new president, has dedicated himself to Moroccan studies for over 45 years,” said outgoing TALIM President I. William Zartman in a press release. “He has worked closely with his Moroccan counterparts. Two of his books and many articles have been translated into Arabic and published in Morocco.” 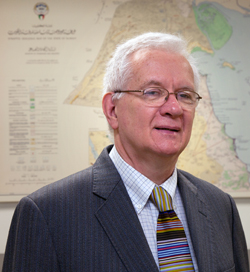 Kiel Alarcón, the communications assistant at Dartmouth’s Institute for Information Infrastructure Protection, biked more than 4,000 miles this summer. His achievement earned him the top prize among Vermont cyclists registered for the National Bike Challenge. Many of the miles Alarcón logged were part of his commute to and from work.

Eric Fossum, a professor of engineering at the Thayer School of Engineering, has been named a Charter Fellow of the National Academy of Inventors (NAI). According to the NAI, Charter Fellows are inventors who have “demonstrated a highly prolific spirit of innovation in creating or facilitating outstanding inventions that have made a tangible impact on quality of life, economic development, and the welfare of society.”

Mary Lou Guerinot, a professor of biological sciences and the Ronald and Deborah Harris Professor in the Sciences, was the recipient of the American Society of Plant Biologists’ (ASPB) 2012 Dennis R. Hoagland Award. The award is given for “outstanding plant research in support of agriculture.” In recognizing Guerinot’s achievement, the ASPB notes, “Mary Lou Guerinot receives this award for her seminal contributions to the field of iron nutrition, work that has revolutionized our understanding of iron’s uptake, long-distance transport, and distribution to subcellular compartments, as well as iron deficiency signaling pathways in plants.”

Douglas Haynes, a professor of history, will receive the American Historical Association’s 2012 John F. Richards Prize in South Asian History. The recognition is for his book Small Town Capitalism in Western India: Artisans, Merchants and the Making of the Informal Economy, 1870-1960 (Cambridge University Press, 2012). The award recognizes the “most distinguished work of scholarship on South Asian history published in English during the previous calendar year.”

Klaus Milich, a senior lecturer in the Masters of Arts in Liberal Studies Program, was the recipient of the Association of Graduate Liberal Studies Programs’ (AGLSP) 2012 Annual Faculty Award. According to the AGLSP, the award, given to one faculty member each year, “recognizes outstanding faculty who exemplify the qualities of interdisciplinary, liberal teaching, and who have participated significantly in teaching or advising students.”

Brian Pogue, a professor of engineering at the Thayer School of Engineering and a professor of physics and astronomy, has been elevated to the rank of Fellow Member in the Optical Society (OSA). According to the OSA, Pogue, who is also a professor of surgery at the Geisel School of Medicine, is being recognized for his “pioneering contributions to biophotonics, specifically in the areas of photodynamic therapy, diffuse optical tomography and spectroscopy, and fluorescence molecular imaging.” In announcing Pogue’s recognition, OSA President Tony Heinz said, “Brian joins a group of new Fellows located across the globe who are making are vital contributions to advancing optics and photonics worldwide.”