From the Plants’ Perspective, It’s All About the Birds and the Bees

Rebecca (Becky) Irwin spends a lot of time thinking about the birds and the bees—literally. She studies them in their roles as pollinators of plants, played out against the backdrop of human activity. 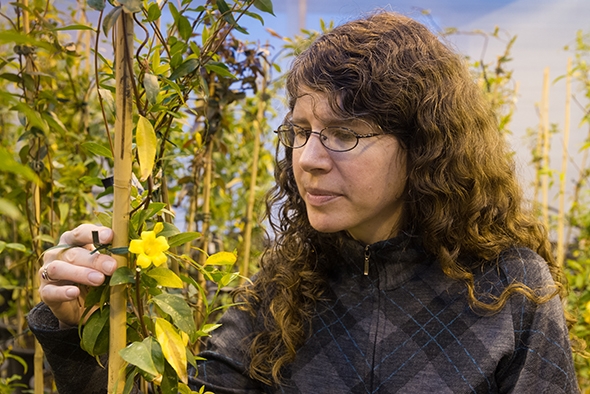 Pollination is the process by which pollen is transferred in the reproduction of plants, a necessary step toward fertilization and sexual reproduction.

Irwin, an associate professor in the Department of Biological Sciences, has been working in the wilds of the Rocky Mountains as well as the suburbs of Raleigh-Durham, N.C. The contrasting nature of these settings provides windows through which she can observe and investigate dissimilar ecologies often complicated by human intervention.

In Colorado, Irwin studied hummingbirds in a setting with intervention, in this case, by creatures other than humans. She wanted to know how plant nectar and pollen resources affect the visits of the birds to the flowers. “I was interested in how hummingbirds know which plants to visit, which were the most rewarding [having the most, the tastiest, and the most nutritious nectar] and how that translates back into plant reproduction.”

She studied how the birds detected “robbed flowers”—those whose nectar had already been hijacked. Irwin found that hummingbirds avoided flowers that had their flowers robbed of nectar by bees. The hummingbirds don’t appear to use vision or odor to detect these robbed flowers. Although the exact cue that hummingbirds use to avoid robbed flowers remains a mystery, one hypothesis that Irwin has been testing is that the beat of the hummingbirds’ wings causes flowers to vibrate differently, depending on the amount of nectar present. This feedback could tell them whether a particular plant would provide a good meal and, from the plant’s perspective, an opportunity for pollination.

These days, the bees have become Irwin’s pollinator of interest. While her focus is on the “mutualists”—the bee and blossom partners that share a mutually beneficial relationship—the effects of humans are definitely part of the picture.

In North Carolina, Irwin is studying the effects of urbanization and how that influences patterns of bee abundance and diversity and the pollination of native plants. In collaboration with her graduate student Adrian Carper and two professors from University of Massachusetts Amherst, Lynn Adler and Paige Warren, the research findings suggest there are more bees in the suburbs. But what is responsible for this growth? 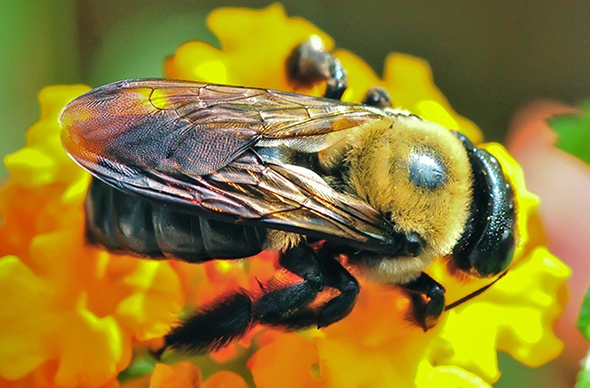 The American bumblebee (Bombus pennsylvanicus) is one of the most common native pollinators in North America. (Photo courtesy of Insectidenfifcation.org)

While the studies are not finished, Irwin hypothesizes that suburbanites’ home gardens may be attracting the bees. They may be spending more time pollinating the gardens and living off this new nutritional source of nectar, which may in turn be supporting the expanded bee populations. This is useful information for our understanding of pollination in agricultural systems, hinting at what kinds of bee-attracting plants might be cultivated in proximity to crops.

Back in Colorado, Irwin is looking at how climate change, generally acknowledged to be human induced, can affect pollination. A warming climate can result in earlier flowering, exposing the plants to potential frost damage. “If the plants flower before the pollinators arrive or emerge, how is that going to affect pollination success of those plants and native plant reproduction?” she asks. Her ongoing research with Dartmouth graduate student Zak Gezon and University of Maryland Professor David Inouye may provide an answer.

Also in Colorado, Irwin is engaged in a study of the invasive plant yellow toadflax. Like so many invasive plants and animals, this one was brought in by humans. “Where people practice open-range grazing of cattle, this invader reduces the value of rangelands because cattle do not like to forage on it,” she says.

But the bees like it. They prefer the nectar of the invasive plant to the native plants, and research suggests that the pollen actually has higher protein content than almost all the native plants Irwin has tested. So, it’s bad for the ranchers but good for the bees.

The consequences of human intervention in pollinator-plant interactions may be unpredictable and serious for all concerned—the birds and the bees, the plants and the people. Through her research, Irwin may fill in some of the blanks, resolve some of the unknowns, and provide some direction in the future for more positive human intervention.