Big news at Dartmouth got some very big treatment on Thursday, November 29, 2012, as the announcement of the election of Philip J. Hanlon ’77 as Dartmouth’s next president, and the president-elect’s portrait, were splashed across one of the world’s largest digital billboards, in full view of tens of thousands of people in Manhattan’s Times Square. 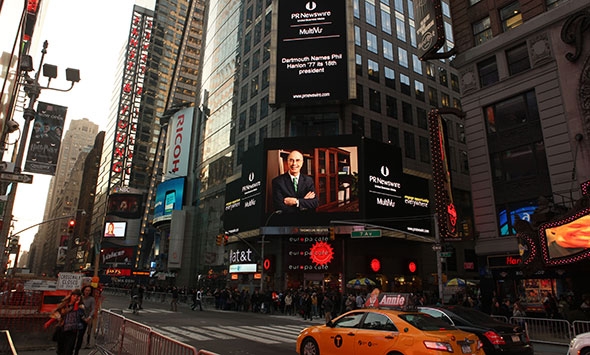 A portrait of President-Elect Philip J. Hanlon ’77 looks out from the 7,400-square-foot screen overlooking Manhattan’s Times Square, known as the “crossroads of the world,” since an estimated 1.5 million people pass through every day.

A giant photograph of Hanlon and a headline about his election appeared on the 23-story-tall display system on the Reuters building in Times Square, nicknamed the “crossroads of the world,” where an estimated 1.5 million people pass through every day. The president-elect’s photo and the headline appeared on the 7,400-square-foot screen several more times over the weekend.

Hanlon serves as provost and executive vice president for academic affairs at the University of Michigan, where he is also the Donald J. Lewis Professor of Mathematics. He will take office as Dartmouth’s 18th president on July 1, 2013.

Dartmouth looks forward to a January 11 campus celebration that will give the community an opportunity to welcome Hanlon and his wife, Gail Gentes, the director of research and faculty support at the Ross School of Business at the University of Michigan.