On the job: Carter began working at Dartmouth in July 1979, starting out in the Kiewit Computation Center building, which was torn down in 2000 to make room for Carson Hall. “I’ve really only had two jobs. I was in the Navy for four years, doing electronics on an oiler stationed in Norfolk, Va., and then here. When I started at Dartmouth it was back in the Kiewit days, when we were using mainframe computers. There weren’t any personal computers then. We had stand-alone terminals and they were hardwired to the mainframe upstairs in the Kiewit building. As far as my job, it’s always evolving. It’s challenging and interesting at the same time. That’s why I’ve been here so long.” 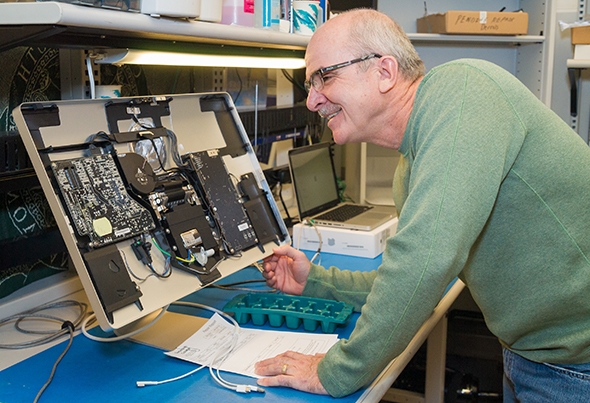 Repair queue: With the advent of the personal computer in the early 1980s, Carter began to focus on repairing Windows-based PCs and Apple computers. “We have a repair queue for the technicians and you never know what you’re going to get, a Mac or a Windows machine. We service every brand of Windows machines, whether they were purchased here or not. But to initially find out whether a machine is having a software or a hardware issue, that can be time consuming. And sometimes just duplicating an issue can be tough. When that happens, we often contact the user for more specifics.”

How to keep your computer out of the repair queue: “Our customers come in with cracked displays, or soda or water spilled all over the keyboard. So taking better care of your computer is key. Also, make sure your software is updated and the anti-virus software is installed and updated. And back up your data. We’ll back up a customer’s data, or we’ll try. We have a lot of students come in here, and their hard drive has died and they need a paper that’s on their computer. If they had backed up their data on the public server or on an external hard drive, they would’ve saved a lot of frustration.”

Computer Sales and Service’s new location: In early November, the Computer Sales and Service store moved from its location in the corner of Carson and into the basement of McNutt (the admissions building). “Now we’re closer to the Green and it’s better for our customers. The new store is definitely brighter, and it has more of an Apple store look.”

At home: Carter lives in White River Junction, Vt., with his wife, Theresa. The couple enjoy camping, antiquing, going to flea markets, and traveling around New England in their camper while checking out town-wide yard sales. He also likes to ride his 400 cc motor scooter, which he describes as “the size of a regular motorcycle.” And every week from late spring through fall, Carter rides his road bike with a group of bicyclists. “We select different routes, meet at the Norwich (Vermont) Green, and then bike anywhere from 15 to 40 miles.”

Do you have a colleague you’d like to see recognized with a Staff Snapshot? Send your suggestions to dartmouth.now@dartmouth.edu. 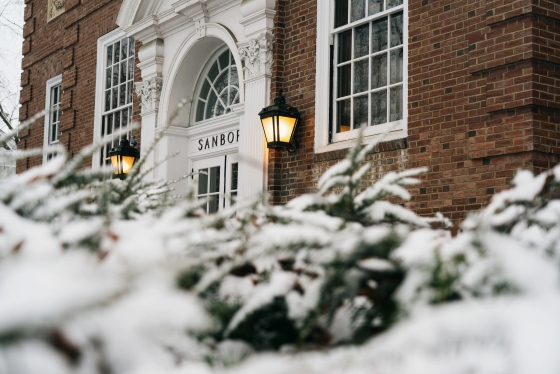