For Students Remaining on Campus, a Break From the Bustle Can Be Refreshing

Yellow tape marks off work zones in the library, sidewalks around campus are being repaired, and many of the people in Collis Center wear hard hats: With most students gone for winter break, the holiday season is also construction season at Dartmouth.

But for those students who remain on campus, the more than six-week period between terms represents a break in name only. Whether they conduct research, work at jobs for Dartmouth, or play for athletic teams, the students keep busy and enjoy experiencing Dartmouth without the usual juggling of classes, papers, and extracurricular commitments. Thanks to a scheduling change that took effect this year, students have a continuous break from Thanksgiving through the New Year.

It is often too expensive or time consuming to travel home, requiring many international students to stay on campus during the winter interim. Dartmouth’s Office of Pluralism and Leadership helps organize activities for those who remain in Hanover.

“There really has been a great collaborative effort across campus to provide quality programming for students staying on campus,” says Director of International Student Programs Steve Silver.

The Outdoor Programs Office, for example, recently held a luncheon that offered tips for students on preparing for winter in Hanover—and making the most of it. Career Services and Computing Services will also host lunches to give students a better idea of their offerings. In late November, the William Jewett Tucker Foundation took seven international students on a two-day service trip to the Boston area, where undergraduates volunteered in homeless shelters. 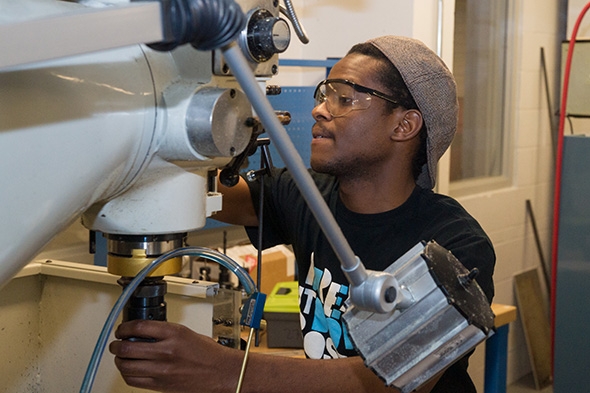 During break, Thabo Matse ’14 works about five hours a day in the machine shop at the Thayer School of Engineering. (Photo by Eli Burakian ’00)

Thabo Matse ’14, who is from Swaziland, says he travels home to Africa only for summer break. Currently, Matse, an engineering and economics major, works about five hours a day in the machine shop at the Thayer School of Engineering. He says it is nice to have some “breathing time.”

“I think, for now it’s great,” he says. “The campus is nice and quiet, and I appreciate that.”

At the beginning of break, Matse participated in the weeklong Global Youth Summit 2012 in London, which he says he wouldn’t have been able to attend during classes. For the holidays, he may visit friends in the area or get together with his host family. About 75 Upper Valley families participate in the International Friendship Family Program, which connects area families with international students.

Some students are still focused on academic work, even though final examinations concluded weeks ago.

Sitting on a green leather couch in the lobby of Baker-Berry Library, Joyce Cho ’13 types away at her thesis project. A classical studies major from New Jersey, Cho is enjoying the lighter traffic around campus. She says it is nice to come to the “usually packed” library and have her choice of study spots.

“At first I thought it was lonely,” says Cho. “But I’m enjoying what the campus and Hanover have to offer.” She often takes walks to local parks and Occom Pond, she says. As for her thesis, “It’s going pretty well, a little slow because procrastination is hitting me.”

But the students who are working on academics or who can’t travel home for the break aren’t the only ones left on campus. 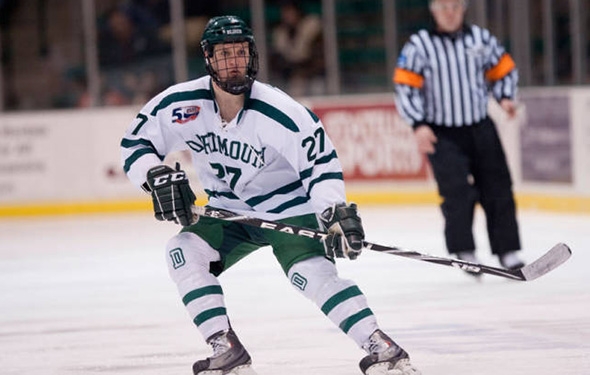 Michael Keenan ’13, captain of the men’s hockey team, says it is nice on break to be “just focusing on your sport.” (Photo by Mark Washburn)

Even though he’s a short drive away from his home in the Boston area, Michael Keenan ’13 will spend four of the six weeks here in the Granite State. That is because Keenan is the captain of the men’s hockey team, and, like many winter athletes, he will spend much of the break practicing or competing.

“It’s kind of nice to be up here with not as much stress, and you’re just focusing on your sport,” he says.

Hockey activities—such as practice, weight training, and meetings—take about four to five hours a day during break, Keenan says. With no classes, the team spends much of its off-ice time together, too, including a recent bowling trip to White River Junction, Vt.

“We’ve been trying to keep busy together and hang out and do some team-bonding,” Keenan says.

Jessica Gagner ’13, a forward on the women’s hockey team, says there hasn’t been a noticeable drop in attendance at games despite students being away.

“I’ve been surprised by how many familiar faces are in the stands,” she says. “Different athletic teams really get out and support each other.”

Gagner, an economics major, says she, too, is keeping busy outside of practice and games. “It’s been really helpful,” she says of the free time. “I am looking for a job, so I’ve been spending a lot of time on career websites and trying to network.” 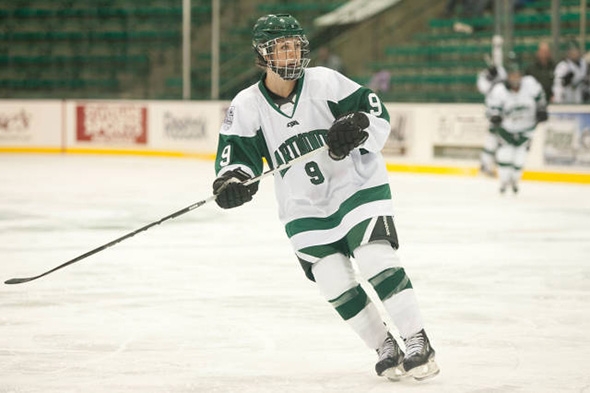 Jessica Gagner ’13 says there has been great support from fans, even with students away. (Photo by Mark Washburn)

Winter break can also be a good time for reflection and simply catching one’s breath.

Dari Seo ’16, who is from Costa Rica, says he wanted to stay at Dartmouth during the break so he could continue to acclimate to college life and reflect on his first term.

He frequents the gym, has done some reading, and has gone to several dinners organized for students on campus, which helped him bond with classmates.

Besides adjusting to college life, Seo is still getting used to a different climate. He had seen snow only twice before this winter. One of those times was, not surprisingly, during a college visit to Dartmouth last year. This winter, he hopes to learn how to ski or snowboard.

“I’m excited for the snow and cold,” he says.  “I’m really looking forward to it.”