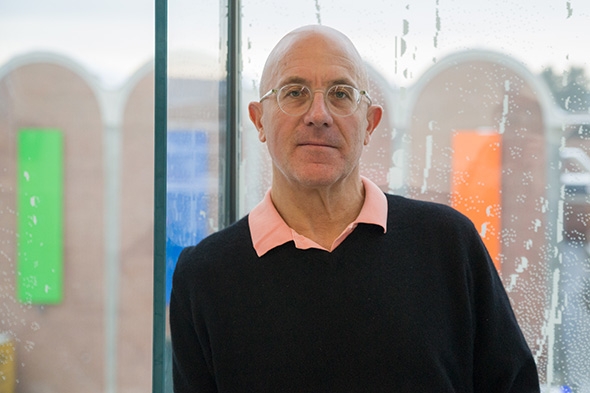 Studio Art Professor Brenda Garand, who took a Queens College sculpture course taught by Newman in the 1980s, is delighted to have her former teacher on campus. “John’s complex work draws from many sources, which include his knowledge of art history, his travels, and his own voice as a contemporary sculptor,” she says. “His work embraces differences through the beauty of surprise; for instance, gourds and gold leaf might rest on a marble pillow. And John’s sharp mind will add to the intellectual life of our students. It is an honor to have him here at Dartmouth College.”

Newman, whose work is in the permanent collection of museums such as New York’s Metropolitan Museum of Art, the Tate Gallery in London, and the Los Angeles County Museum of Art, delivered a public lecture on January 15, 2013, in the Hood Museum of Art auditorium, followed by a reception in the Hopkins Center for the Art’s Jaffe-Friede Gallery, where an exhibition of his sculptures will be on view through March 10, 2013. 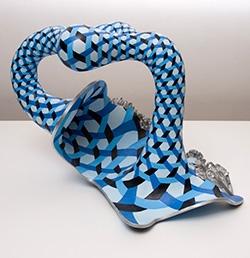 “Ask the fact for the form (indigo and of itself),” 2011, made from extruded aluminum, wood, steel wire, Japanese paper, papier mache, wood putty, acqua resin, and acrylic paint. (Photo courtesy of John Newman)

The exhibition consists of 20 of Newman’s works from the collection of New York businessman William Louis-Dreyfus, and is entitled “Everything Is on the Table.” Newman notes that the exhibition title has a literal meaning, as the pieces will be displayed on a 40-foot-long, four-foot wide table. But he jokes that it’s also a tongue-in-cheek reference to a constant refrain from President Barack Obama and Speaker of the House John Boehner during the recent fiscal cliff negotiations.

Early in his career, Newman—who earned an MFA from Yale and later directed the school’s graduate sculpture program for six years—was known for his large-scale pieces, which included commissions from the Department of Transportation in Washington, D.C., among others.

But nearly 20 years ago, after trips to India, Japan, and Africa, he decided to chart a different artistic course. “I saw all these cultures where smaller objects had such significance, either spiritually or religiously,” he says. “And I started to question things and realized there was a lack of intimacy or contemplation in the Western art world.”

So he began to make smaller pieces, creating tabletop sculptures from unusual and seemingly unrelated materials. “I really got excited about this work. Figuring out, how do you get things to connect?” says Newman, who lives in New York City and grew up in nearby Flushing. “But a lot of people thought it was really weird. People often misunderstand my work as surreal, because they see these disparate things. And because it’s not seemingly geometric or representational, it’s something that is not easily categorizable.” 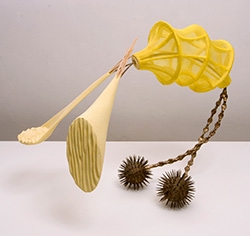 “But just in the last few years, people’s attitudes toward my work have changed and I’m having a second career now,” says the sculptor, who has had more than 40 solo shows worldwide. “It’s a very interesting moment for me. I’m making this work that many people say doesn’t look like anything else. I’m really interested in jazz, so now it’s like I’m Ornette Coleman. I just turned 60 and I don’t feel I need to justify myself or defend myself. I do what I do and I just step up to the mic and blow my horn.”

During his 10-week term, Newman will interact with students, faculty, and the Upper Valley community. In addition to working on sculptures, he says, “I’ll probably be doing a lot of drawing while I’m here, since drawing is a very important part of my work. And I want to do some printmaking. And maybe I’ll learn how to cross-country ski. I’m looking forward to having some fun.”

The artist-in-residence program began in 1932, when inaugural artist Carlos Sanchez ’23 spent a year on campus. The next artist was José Clemente Orozco, who spent two years in residency working on The Epic of American Civilization—a series of murals in Baker-Berry Library. Since 1962, Dartmouth has hosted three to four distinguished artists every year.

Description
Jami Powell, curator of Indigenous art at the Hood Museum of Art, is highlighted in a story celebrating curators who are shaping museums beyond their legacies as colonial institutions.
The Boston Globe