Chemistry in Action Transcends the Classroom

With a pyrotechnic demonstration, Professor F. Jon Kull ’88 initiates students into the mysteries of chemistry while simultaneously engaging, educating, and entertaining them. Kull presented the show as part of “Biology/Chemistry 9,” a course he and Roger Sloboda teach that is a combination of introductory chemistry and biology. This is the second year they have taught the course, funded by a grant from the Howard Hughes Medical Institute. 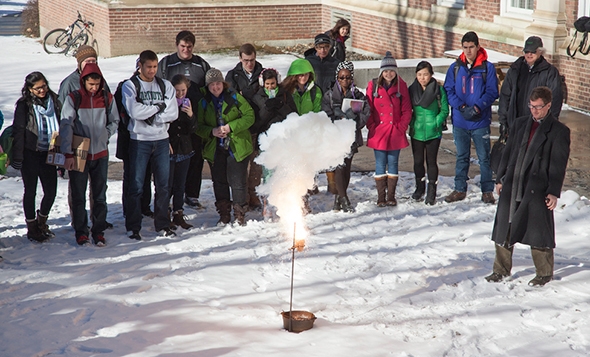 The demonstration was held outside of Steele Hall at the end of class on Tuesday, January 22. The ingredients for a thermite reaction—aluminum powder and iron oxide—were mixed in a terracotta flowerpot. Kull then initiated the reaction by adding a few drops of glycerin to some potassium permanganate. 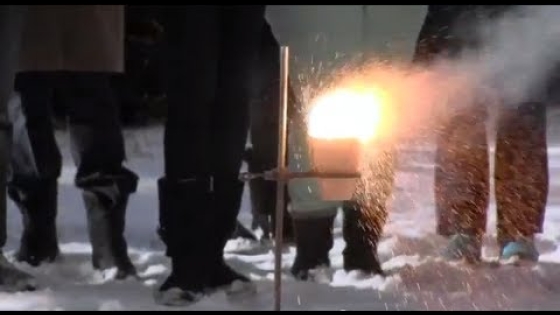 “The thermite reaction which we demonstrated is one of the more exothermic [heat producing] reactions known, and is especially cool as the heat released from the reaction is absorbed by the iron that is formed, causing it to melt (iron melts at 1530 degrees C), so it is a very dramatic demonstration of reaction heat,” says Kull, a professor of chemistry and the dean of Graduate Studies.

A thermite reaction (often called thermite welding) has been employed as a convenient method to join train rails, since it requires no external source of heat or current.

Kull explains that the demonstration was part of a series in general chemistry that shows students how the theory and mathematical/chemical equations they learn apply to real life situations.  “As with all learning, if one can pique the curiosity of the students, they become more engaged, and the learning becomes that much easier,” says Kull.

At the end of the demonstration, one of the students said, “This has been the reason I always liked chemistry.”