Communicating Emotion: How Music and Movement Can Make This Happen

Music and movement reflect the rhythm of life, stirring human emotions in societies around the world. Even infants display signs of the interconnectedness of music and movement as they bounce up and down to musical rhythms. Music and movement might be characterized as two sides of the same coin—the coin being emotion.

Gaining an understanding of the connections between these behavioral expressions is a quest Dartmouth researchers have undertaken. 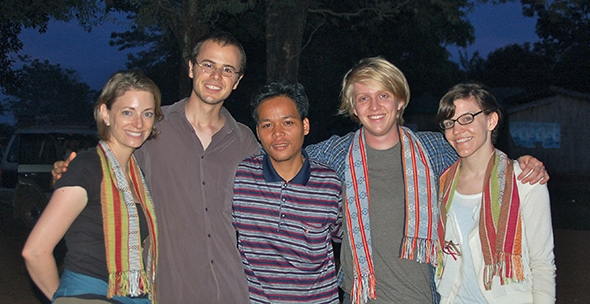 “Music sets us in motion—dancing, marching, or just tapping our toes. The combination of music and motion can also lead to an emotional response, making one feel romantic, patriotic, or just happy or sad,” says Thalia Wheatley, an assistant professor in the Department of Psychological and Brain Sciences (PBS) at Dartmouth who is leading a study about the way humans respond to both music and movement.

Wheatley’s hypothesis was that the connections between music, movement, and emotion are innate and follow the same patterns in distinctly different cultures. Support from the Nelson A. Rockefeller Center and the John Sloan Dickey Center for International Understanding, both at Dartmouth, enabled Wheatley to test these assertions. She compared a group of Dartmouth students to villagers in northeastern Cambodia and discovered remarkable similarities across the board.

Wheatley and her colleagues report on their research in a January 2013 paper in the Proceedings of the National Academy of Sciences, casting new light on the ancient marriage of music and movement. Beau Sievers, first author on the paper, is a former music student who is now a graduate student working with Wheatley. 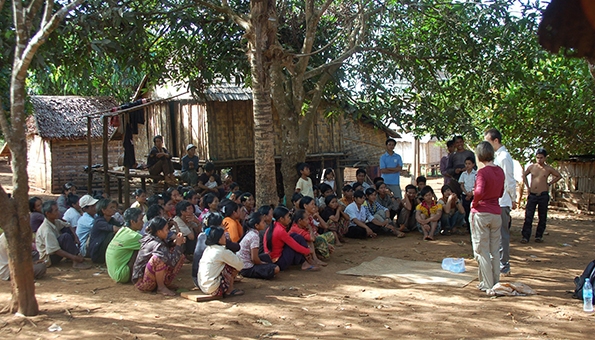 Thalia Wheatley and translator Trent Walker invited the entire Kreung village of L’Ak to hear about the study and how similar the results were to those of Dartmouth students. (Photo courtesy of Thalia Wheatley)

During the study, both the students and the villagers were shown an image on a computer screen of five “slider bars,” much like the scroll bars appearing on the side of a digital document. Each bar that was manipulated by a test subject controlled an equivalent feature in either computer-generated music or an animated object—a bouncing ball in this case. With the ball, the scientists recorded observations such as bounces per minute, regularity of bounces, and direction (up or down). Correspondingly, observations they recorded in the music included notes per minute, regularity of notes, and increasing or decreasing pitch.

The students were divided into two groups, one to deal with the music and the other to guide the movements of the ball. The Cambodian villagers were similarly divided into groups of music makers and movement manipulators.

Using the sliders, the music test subjects at Dartmouth and in Cambodia were asked to create emotional music—music that might sound happy, angry, sad, scared, or peaceful. The animators were told to imbue the bouncing ball with the same emotions through its movements.

Nearly identical results were seen in both the music and the movement tests among both sets of students. The results from the two groups of villagers were also equivalent. The overall test results of the Cambodians tracked closely with the college students’ results. Wheatley’s study findings support the hypothesis of cross-cultural universality of linked music, motion, and emotion.

Wheatley points out that the interplay of music, motion, and emotion can also be seen working on the broader social level. “Music allows us to move to a beat as a group, creating a shared emotional experience and this can really be socially powerful,” says Wheatley. “If you’ve ever been to a concert or stood up with people at a national anthem, you can feel a strong common bond with the group elicited by the music.”