The devastation recently wrought by Superstorm Sandy reawakens memories of Tropical Storm Irene, still fresh in the minds of many Vermonters. Irene’s legacy is evident in ruined rivers, shattered homes, and historic covered bridges washed away. Perhaps more unsettling is the prospect of more to come, say a pair of Dartmouth professors who are studying the damage Irene left behind. 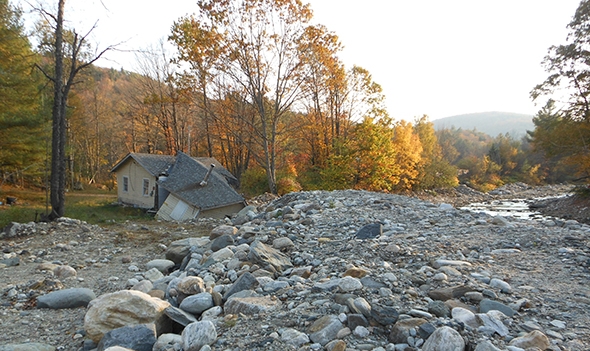 The destructive effects of Irene are exemplified by the remains of a southern Vermont house demolished by the flooding of Wardsboro Brook. (Photo by Frank Magilligan)

“There is no smoking gun here that directly associates Irene with global warming, but all the climate models suggest that storms like Irene and Sandy are going to increase in intensity, magnitude, and frequency,” says Frank Magilligan, a professor in the Department of Geography at Dartmouth.

Magilligan is collaborating with Carl Renshaw, a professor in the Department of Earth Sciences and an adjunct professor in the Thayer School of Engineering, to understand the effects of Irene on stream channel erosion and its repercussions on the land and the people. Given the probability of destruction from major storms in the future, information derived from Irene can serve as a basis for both predicting storm-related hazards and preparing for them. 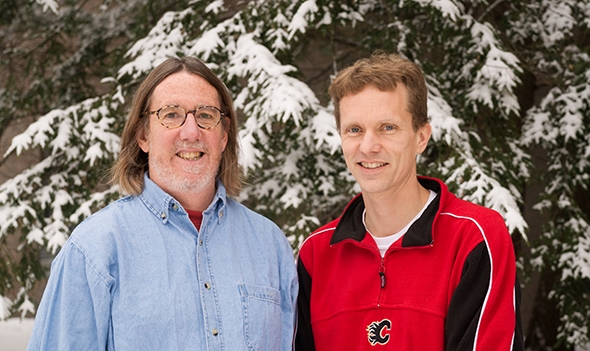 Directly after Irene, the National Science Foundation (NSF) awarded Magilligan and Renshaw $45,000 to perform a rapid assessment of the storm’s aftermath. Then, in September 2012, they received a three-year, $345,000 NSF grant to conduct more detailed studies of longer-term impacts, as well as potential recovery and rehabilitation measures for Vermont watersheds.

Magilligan and Renshaw are looking at the results of channel expansion into the stream banks where roads and houses were washed away. Their studies of the natural stream systems can help them understand the potential magnitude of these channel shifts, pinpoint where along the stream they might occur, and they are sharing this information with the public.

“We would like to be able to identify the potentially affected regions before things actually happen, but right now we are limited in our ability to plan and predict,” Renshaw says. They are now combining their field analyses with imagery from remote sensing or aerial photography to develop more rapid and accurate assessment techniques. 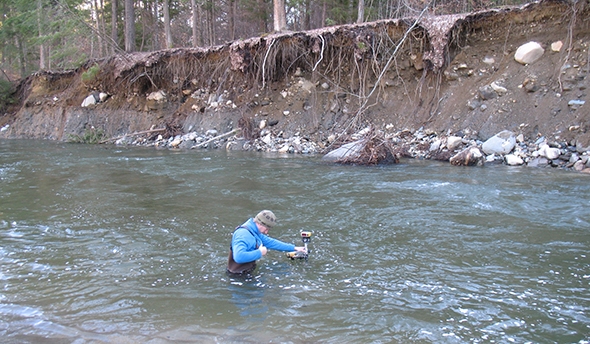 Earth sciences graduate student Eirik Buraas surveyed the stream channel of the Saxtons River near Grafton, Vt., to calculate the amount of erosion of the channel bed and stream banks. (Photo by Frank Magilligan)

From a scientific standpoint, Irene has provided an opportunity to investigate what happens when a stream system is disturbed, and what processes may be involved in the system’s recovery. “From the social perspective, we hope to get at some of the hazards and risks associated with stream disturbance, specifically where people should or should not live,” says Magilligan.

Beyond the actual stream channel erosion, the Dartmouth scientists are concerned about stream channel recovery. “Associated with the storm, there were two sources of disturbance of about equal magnitude,” says Renshaw. “There was Irene, and then there were the bulldozers.”

With help from senior honors student Abby Franklin ’13, Magilligan and Renshaw are doing a comparative analysis of channel sections affected by Irene alone, and adjacent regions where there was post-Irene streambed disturbance by power equipment used to redevelop or reconfigure the channel.

“Stream channels typically recover under natural conditions within about five to 10 years, but where bulldozers were involved in the rehabilitation efforts, it might take considerably longer,” Magilligan says. “If we can demonstrate this through our research, the town planners might hesitate in bringing in the power equipment where they could do more harm than good.”

To help municipalities in dealing with Irene’s aftermath and in preparing for similar high-risk events in the future, Magilligan has presented the team’s research results at public forums that included town managers and local land use planners.