Dartmouth Students Get a Taste of Foreign Relations Through Crisis Simulation

Dartmouth students recently got a glimpse of what a collapse of the North Korean government might look like: famine, thousands of refugees, and political standoffs.

Not to mention one other concern: “about a dozen nuclear weapons somewhere in the north—which might become ‘loose nukes’ when the regime collapses,” says Daryl Press, associate professor of government. 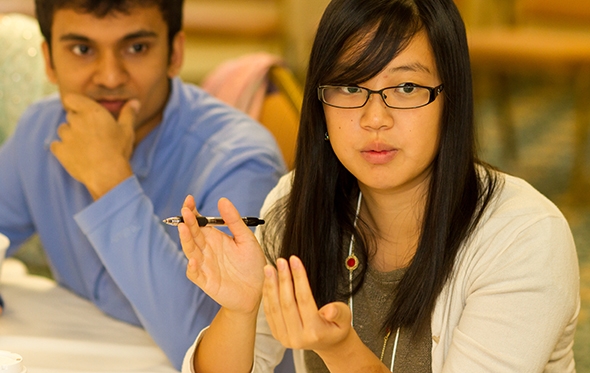 Around 50 Great Issues Scholars and War and Peace Fellows gathered this month at Lake Morey Resort in Fairlee, Vt., to participate in a crisis simulation involving the collapse of the North Korean government. Fred Hill, who previously helped craft war games for the State Department, directed the simulation. Students were assigned to teams to represent countries, as they negotiated behind closed doors, participated in United Nations meetings, and tried to reach a joint resolution.

A goal for the annual project is to build community among first-year Great Issues Scholars and upperclassmen in the War and Peace Fellows program while they learn about international relations. Both programs are run by the John Sloan Dickey Center for International Understanding. Hill, who lives in Maine, directed the simulation for the fourth year.

“The simulation was terrific,” says Press, who coordinates the War and Peace Fellows program. “The dynamics of the game mirrored what I fear would play out in reality.”

When people imagine a disaster on the Korean peninsula, Press says, they usually think of a military engagement.

“A war on the Korean peninsula is not the hardest problem,” he says.

The collapse of the North Korean government could present many humanitarian and political challenges: widespread starvation, groups fighting for power, and refugees fleeing to China, South Korea, and other countries. Associate Professor of Government Jennifer Lind, an expert on East Asia, helped oversee the simulation. She says this sort of collapse could happen tomorrow, a decade from now, or not at all.

“I think what is quite clear, and what the simulation showed, is this would be a catastrophic event for security in East Asia,” says Lind, who wrote about the topic for the journal International Security and briefed senior leadership of the Korea-based Eighth U.S. Army about these risks in 2011. Whether an actual collapse happens or not, Lind says, students gain an appreciation for the many competing interests in the region.

Students did a remarkable job of internalizing each country’s national interests, according to Press, and learned that breakdowns in international negotiations are not always due to a lack of communication or empathy, but can instead be the result of significant differences in national values and interests.

Several students said they understood their countries’ perspectives better from taking and defending a position.

“No number of articles or essays is as effective for helping students learn as a full immersion into the region’s mindset,” says Hui Cheng ’16, who helped represent Russia.

Others were struck by how countries acted differently in closed-door negotiations than they did in public forums.

“During the behind-the-door negotiations, each delegation focused on its state interests and how to advance them,” says Ala’ Alrababa’h ’14. “However, the public statements did not reflect that. Instead, each delegation tried to portray itself as one whose only concern is saving human lives, rather than advancing its interests.”

Students seemed to come away with new friendships and much more.

Leehi Yona ’16, an environmentalist, says she had been skeptical of United Nations negotiations prior to the simulation.

“But now that I’ve had the opportunity to experience them as a participant rather than as an observer,” Yona says, “I’ve come to realize that there’s much more to the complexity and politics of these issues than meets the eye.”