Jimmy Ragan ’16 had never traveled outside the United States before last month. But with help from the Hopkins Center for the Arts, his first trip abroad was an unforgettable one. 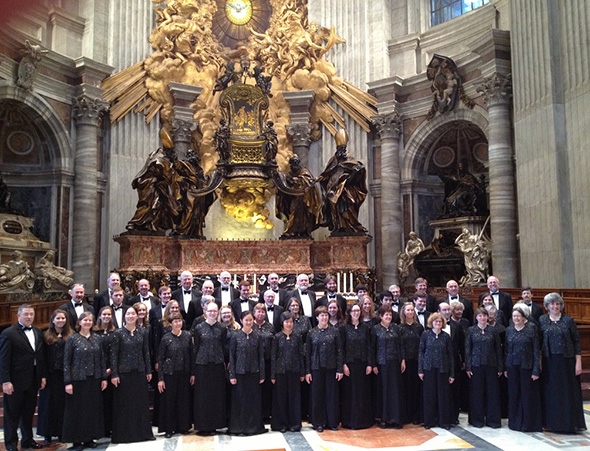 Ragan is one of 54 members of the Handel Society of Dartmouth College, including 15 Dartmouth students, who made a whirlwind 13-day, eight-performance tour across Italy. The choral and orchestral group, which includes members from age 17 to the late 70s, performed at St. Peter’s Basilica in Vatican City and at churches in scenic coastal towns, all the while learning about Italian history and culture. The Hopkins Center 50th Anniversary Celebration provided support for student travel expenses.

“I found that I was able to learn much about myself, Italy, Europe, and the world,” says Ragan, who is studying music and government.

Every three years, the Handel Society travels abroad to perform for international audiences. Founded in 1807, it is the oldest “town-gown” choral and orchestral group in the United States, and draws members from around the Upper Valley. Robert Duff, conductor and director of the Handel Society, says this trip was a tremendous educational experience, as it combined elements of music theory and music history.

The performances featured music in five different languages from a variety of composers, says Duff, and the group received a warm reception in the Mediterranean country.

“The audiences were plentiful and enthusiastic,” he says. “They seemed quite appreciative of the diversity of the program.”

Because of Italy’s longstanding choral tradition, the group often performed music in the same venues where the pieces were created centuries ago, says Duff, who also teaches music theory at Dartmouth.

Ellen Irwin ’14 says she enjoyed learning the translations and backstories of the songs.

One part of the experience was getting acquainted with other Handel Society members. Students found themselves in the company of dairy farmers, bankers, doctors, and cabinetmakers. The group connected during meals, rehearsals, and sightseeing tours in places such as Pompeii, Sorrento, and Napoli.

Scot Drysdale was one of three Dartmouth professors on the trip. The professor of computer science says he had already known students’ names and faces from their practices together, but he got to know the students much better during the trip.

“Eating dinner with students and doing other things with them let me get to know them as people,” he says. “Their energy was contagious.”

Likewise, the students enjoyed being around the more senior members of the group.

“They taught me many things about singing in the Handel Society,” says Ragan, “but also about taking hold of all the opportunities life gives you.”

“I received valuable advice on everything from graduate school to local recreation center classes,” says Irwin. “I really enjoyed spending time with the members in a completely different environment.”

“That is probably a once-in-a-lifetime opportunity,” says Duff.