As part of a continuing slate of public art installations during Dartmouth’s Year of the Arts, a piece by Keith Moskow ’83 and Robert Linn of Moskow Linn Architects in Boston, has been placed outside the Class of 1978 Life Sciences Center. The 20-foot-tall Ice Chimes is a weather-responsive musical sculpture that creates sounds from collected ice and snow.

“We are thrilled to have the Ice Chimes at Dartmouth this winter,” says Michael Taylor, director of the Hood Museum of Art and chair of Dartmouth’s Public Art Committee. “One of the goals of the Year of the Arts is to bring art to different parts of the campus, and Ice Chimes, with its blend of architecture, art, engineering, music, and science, seemed like the perfect work to install outside the Class of 1978 Life Sciences Center. 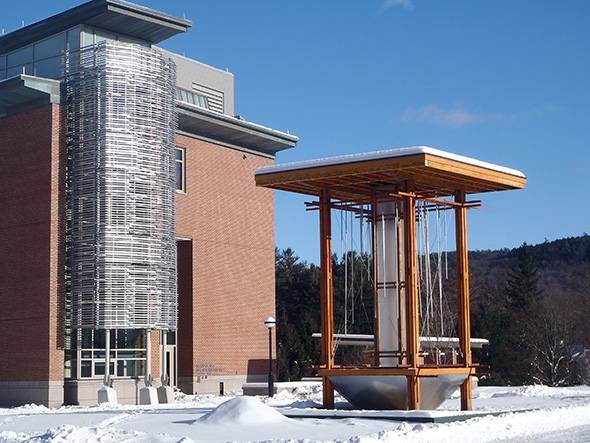 “I feel confident that students, faculty members, and other passersby will be intrigued and delighted by this outdoor art project, which celebrates the beauty and sound of icicles as they sway in the wind, clinking and chiming until they grow heavy with their own weight and fall into the collection bucket below.”

Moskow and Linn designed Ice Chimes for the Rose Kennedy Greenway in downtown Boston, where it was installed last winter. It is now on loan to Dartmouth for this winter. “I’m delighted that Dartmouth decided to reconstruct it, and hopefully it will be a very cold and snowy winter,” says Moskow, who was a visual studies major. “The piece doesn’t chime until there’s ice on it. It’s really much like the Robert Frost poem Birches, the clinking of the ice as it crashes down. That is the ‘music.’ It’s not like a chime that you hang on your porch. So it is critical that it be cold and there be snow.”

The sculpture is constructed of heavy timbers that are bolted together. A perforated canopy on top of the Ice Chimes catches precipitation, and heating coils then melt the collected snow and freezing rain. This liquid drips down through a grid of holes onto suspended metal rods, forming icicles on the rods. The rods sway in the wind, clinking and chiming, until the icicles break off and fall into the metal collection bucket below, which amplifies the sound and causes reverberations. As the Ice Chimes website explains, “It becomes this constantly changing sculpture with icicles growing and falling and growing again.” 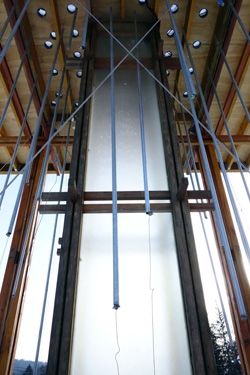 The inside view: A perforated canopy on top of the ‘Ice Chimes’ catches precipitation, and heating coils then melt the collected snow and freezing rain. This liquid drips down through the grid of holes onto these suspended metal rods, forming icicles on the rods. The rods sway in the wind, clinking and chiming, until the icicles break off and fall into the metal collection bucket below, which amplifies the sound and causes reverberations. (Photo by Bonnie Barber)

The architects say that even if New England should see unseasonably warm weather this winter, Ice Chimes will still be an engaging sculpture. “The centerpiece glows at night and it has a nice presence, like a beacon,” says Linn.

Moskow and Linn designed the Boston Logan Airport 9/11 Memorial, the Conservation Law Foundation Headquarters in Boston, and the Carroll School in Lincoln, Mass., and numerous residential projects. They are the recipients of three national American Institute of Architects awards, and have co-authored five books, including Contemporary Follies, which was published last month; Sustainable Facilities: Green Design, Construction, and Operations; and Small Scale: Creative Solutions for Better City Living.

Dartmouth’s robust slate of public art installations during the 2012-13 year continues an 80-year tradition of engaging contemporary artists in the life of the campus and community. Dartmouth’s legacy of public art programming dates back to 1932, when the school commissioned the Mexican artist José Clemente Orozco to create a mural in Baker Library. The resulting 3,200-square-foot work, The Epic of American Civilization, is widely recognized as one of the most historically significant murals of the 20th century. Since the 1930s, Dartmouth has welcomed more than 150 artists-in-residence to its campus, including such internationally recognized figures as Walker Evans, Donald Judd, R.B. Kitaj, Magdalene Odundo, Robert Rauschenberg, George Rickey, Alison Saar, and Frank Stella. 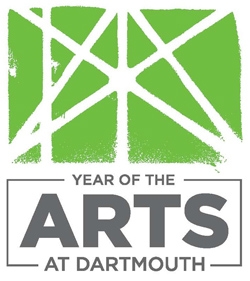