Award-winning playwright Katori Hall will deliver the keynote address on January 21 at Dartmouth’s 2013 Martin Luther King Jr. Celebration. The celebration at Dartmouth dates back to the 1970s.

“This is an incredible time to be here at Dartmouth College as it celebrates the Year of the Arts and the 40th year of co-education on campus,” Hall says. “To be asked to participate in this year’s Dr. Martin Luther King Celebration is a great honor and a joy. I often look at Dr. King’s dream and am at awe at how far we’ve come, but overwhelmed by how far we have to go towards achieving true equality nationally and globally. I thank Dartmouth College for giving me an opportunity to reflect with its faculty and students about this point in history while honoring the legacy of one of my biggest heroes.” 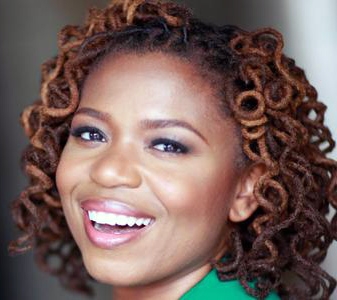 Playwright Katori Hall won the 2010 Olivier Award for The Mountaintop, marking the first time a black woman has won in the category Best New Play. (Photo by Xanthe Elbrick)

This year’s theme is “The Art of Non-Conformity: Making the World Better.” The celebration features a slate of events from January 17 to February 1.

“Each of us, at moments in our lives, is asked to conform in ways to cultural values, social norms, expectations, the politics of the day,” says Gabrielle Lucke, director of diversity training and educational programs and chair of the Martin Luther King Jr. Celebration committee. “In these moments we need to tap into the art of nonconformity to be our best selves and to be value added in this world.  You will see through this year’s events, speakers, and Social Justice Award honorees how to do that very thing.”

In addition to Hall’s talk, highlights include the January 21 Martin Luther King Day Employee Celebration Breakfast, and the January 21 Student Forum on Global Learning, which opens with remarks from renowned photojournalist and Roth Distinguished Visiting Scholar James Nachtwey ’70. The events conclude with the presentation of the 2013 Martin Luther King Jr. Social Justice Awards on February 1. This year’s awards will honor Karen Lewis ’74 (in absentia), the Barnet family, Joseph O’Donnell, Steve Cosson ’90 (in absentia), and the 2013 student group winner, the Dartmouth Graduate Veterans Association.

Hall’s play The Mountaintop, which fictionally depicts King’s last night before his assassination, has earned much critical acclaim. For the work, Hall received the 2010 Olivier Award for Best New Play, marking the first time a black woman has won in the category. The British Olivier Awards are comparable to the Tony Awards in the United States. The Mountaintop opened on Broadway in 2011, with Samuel L. Jackson starring as King.

Hall will speak at 7 p.m. in the Moore Theater at the Hopkins Center for the Arts. The talk will feature remarks from President Carol L. Folt and Nikkita McPherson ’13, president of the Afro-American Society. Free tickets will be available at the Hopkins Center Box Office beginning on Tuesday, January 15 for all Dartmouth ID holders, and will be made available to the general public at 10 a.m. on Thursday, January 17 (limit four tickets per person). Ticket holders are asked to take their seats by 6:45 p.m., after which empty seats will become available to those without tickets.

After Hall’s talk, there will be a reception at the Top of the Hop.

McPherson says that in writing The Mountaintop, Hall gives audiences a more personal look at the civil rights leader.

“I look forward to members of the Dartmouth community witnessing Katori Hall’s vibrant personality,” she says.

Hall, who is from Memphis, Tenn., has received numerous awards, including a Fellowship of Southern Writers Bryan Family Foundation Award for Drama, a Lorraine Hansberry Playwriting Award, an Otis Guernsey New Voices in American Theatre Playwriting Award, and two Lecomte du Nouy Prizes from the Lincoln Center. A 2003 graduate of Columbia University, Hall has written for The New York Times, Newsweek, and The Boston Globe.

Last year marked the 50th anniversary of King’s “Towards Freedom” speech at Dartmouth. On January 21, an audio recording of the speech, accompanied by images from the civil rights movement, will play on a continuous loop from 9 a.m. to 3 p.m. in 105 Dartmouth Hall—the room where King gave the speech.