Listen to the podcast with Professor George Trumbull IV

“This is a particularly gratifying time to teach the history of Islamic Africa,” says George R. Trumbull IV, an associate professor of history who has taught at Dartmouth since 2008. “When we see contemporary events like what just happened over the past two years in North Africa, in northern Mali, in Sudan, it forces us to look again at patterns of the past that we thought we understood and read texts in a new way and think about them in a new way.” 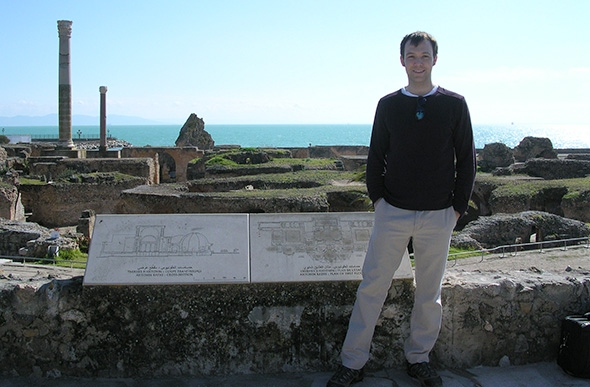 George Trumbull IV spent the 2011-12 academic year on sabbatical, researching a book on the history of water in the Sahara. Here he’s pictured in Carthage, Tunisia, where he conducted research. (Photo courtesy of George Trumbull IV)

For winter term, Trumbull is teaching “Islam in Africa” and a first-year seminar called “Pirates and Piracy in Global Historical Perspective.” He has published extensively on politics and religion in North Africa, including his 2009 book, An Empire of Facts: Colonial Power, Cultural Knowledge, and Islam in Algeria, 1870-1914.

In this podcast, Trumbull talks about his 2011-12 sabbatical, during which he spent time conducting research in Morocco, Tunisia, and Algeria; how his sabbatical influenced the way he taught one of his fall term 2012 classes, “History of North Africa;” and research for his book on the history of water in the Sahara, among other topics.

In addition to his position in Dartmouth’s history department, Trumbull is affiliated with the African and African-American Studies Program and the Asian and Middle Eastern Studies Program. His research has been supported by fellowships from the Social Science Research Council, Fulbright-Hays, Whiting Foundation, and the American Council of Learned Societies. A 1999 graduate of Princeton, Trumbull received a PhD in history from Yale. His father, George R. Trumbull III, is Dartmouth Class of 1966 and Tuck Class of 1968, and his sister, Melissa Trumbull Mitchell, is Class of 1995.