When Professor Donald E. Pease taught at Oxford more than a decade ago, he often strolled past the gothic buildings of the Oxford Union Society. But he didn’t imagine he would ever speak in the chambers that have hosted Albert Einstein, Mother Teresa, and Gandhi. 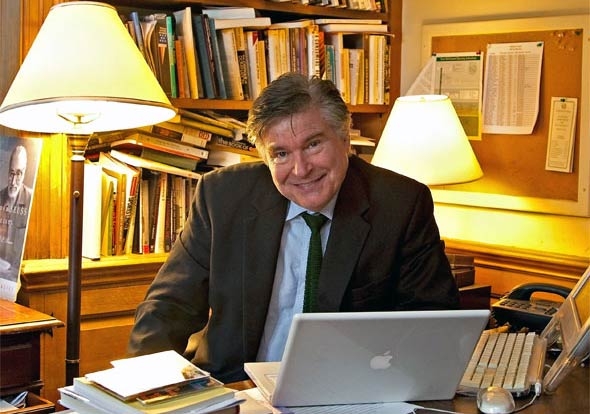 Donald Pease anticipates a heated discussion at the Oxford Union Society. “The give-and-take can be as intense as that in the British Parliament,” he says. (Photo by Joseph Mehling ’69)

“It came to me as a total surprise, to get this invitation over my email at 5:30 in the morning,” Pease says with a laugh, “I thought it was a joke.”

Pease, the chair of the Master of Arts in Liberal Studies program, will speak on the motion “This House Still Dreams the American Dream,” which examines the influence of American ideals in contemporary times. Pease will debate with seven other speakers—four per side; among them are Ray McGovern, a retired CIA officer, and Craig Murray, a former British Ambassador to Uzbekistan. The January 24 event was deliberately timed to follow President Barack Obama’s inauguration on January 20.

The Oxford Union Society is internationally renowned as an arena for free speech. It is “the great debating society on the planet,” Pease says. “The Oxford Union has been accurately described as the place where free speech is at once celebrated and rendered real, debate by debate.”

Pease, the Ted and Helen Geisel Third Century Professor in the Humanities, was given the choice to argue for or against the motion, and says he will speak in favor of it. The society expects the debating chamber to reach its 450-person capacity, and Pease anticipates challenging questions from students as well as from his fellow debaters.

“The give-and-take can be as intense as that in the British Parliament,” Pease says, noting that many British politicians sharpened their debating skills at the Oxford Union.

While the English professor expects a heated discussion, he hopes students will gain more from the debate than just a point of view.

“One of the challenges of free speech has to do with the ability to maintain civility, even in the most impassioned of exchanges,” says Pease. “What I want the students to come away with is a sense of the importance of civil argument.”

Adrian Randolph, associate dean of the faculty for the arts and humanities, says he looks forward to seeing how Pease approaches the topic of the American dream. Pease was recently awarded the 2012 Bode-Pearson Prize by the American Studies Association, and is the director of the Futures of American Studies Institute, an annual conference hosted at Dartmouth.

“Don Pease is an exceptional intellectual whose work has helped frame the study of the United States in a broader, transnational context,” says Randolph.

The Oxford Union Society, founded in 1823, draws many members from the University of Oxford, though it exists separately from the school and its members include students from other institutions. The society has produced at least 11 members who have gone on to become Britain’s Prime Minister.

“It is exciting that a Dartmouth faculty member has been invited to join the ranks of the intriguing and influential figures to have spoken in its halls,” says Randolph, the Leon E. Williams Professor of Art History.

Pease says that in this day of sound bites and social media, he is glad there is still a place to deliberate at length over serious issues.

“I look forward to learning something I didn’t know in responding to a question I hadn’t been anticipating,” says Pease. “That’s the gift of that kind of exchange.”