The Rev. Nancy A.G. Vogele ’85 has been a vital member of the Upper Valley religious community for more than a decade, serving as rector of St. Paul’s Episcopal Church in White River Junction, Vt., since 2001. 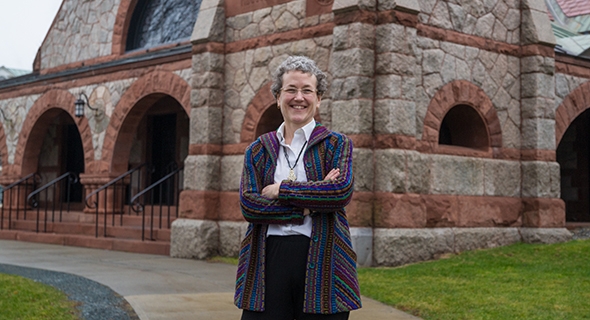 The Rev. Nancy A.G. Vogele ’85 has joined the Tucker Foundation as the director of religious and spiritual life. (Photo by Eli Burakian ’00)

But at the beginning of January, Vogele came home to Dartmouth as the new director of religious and spiritual life at the William Jewett Tucker Foundation. It was a double homecoming for the Illinois native, who worked for the Tucker Foundation from 1985 to 1987.

“When I was Tucker’s first volunteer coordinator, I thought I had the best job in the world because I had students coming to me who wanted to be of service,” she says. “And I feel like this job is very similar to that one. But instead of just being related to service, it’s meaning, and spirit, and giving students a place to explore that. That really excites me.”

The Rev. Richard R. Crocker, the Virginia Rice Kelsey ’61s Dean of the Tucker Foundation, says, “Nancy is a good fit because, in her work to date, she has shown exceptional leadership in the areas of faith and service, a combination that the Tucker Foundation has always embraced. She is uniquely qualified because of her extensive knowledge about Dartmouth and about the needs of the Upper Valley.”

Vogele has remained connected to campus over the years by volunteering her time to work with students through Dartmouth’s Office of Pluralism and Leadership (OPAL), serving on the advisory committee for investment responsibility, and giving talks at Tucker, including participating in Tucker Tuesdays. When she learned that this position had opened at Dartmouth, she says, it seemed like the perfect opportunity to “change the setting of my ministry” and be a part of campus conversations that “help foster ethical discussions and ethical decisions so that students have a good basis for that when they graduate.

“The thing I want to do is to develop relationships, with students, faculty, and staff, with anyone who is interested in religion or spirituality, or just meaning, because not everyone uses the words ‘religion’ or ‘spirituality’ any more. The phrase that keeps sticking in my mind is to help raise the level of discourse about matters of spirit and how that supports the everyday challenges of our lives. And I would just love to offer a wide invitation to anybody who wants to have these conversations to please be in touch with me.”

As an undergraduate, Vogele was a double major in French and government and planned to go into the Foreign Service. She worked from 1988-1990 in the Democratic Republic of the Congo as a Volunteer for Mission with the Episcopal Church, and then started a two-year Master of Arts program at Yale Divinity School, focusing on world christianity/missions. But during her first semester, she decided to switch to the three-year Master of Divinity, and ever since has sought to make connections between her religious profession and social justice.

At St. Paul’s Church, Vogele was chair of the Dismantling Racism Commission for the Episcopal Diocese of Vermont, served as an officer for United Valley Interfaith Project, and helped guide St. Paul’s Hurricane Irene recovery efforts, among other outreach efforts.

The White River Junction resident says she is pleased to be “coming home. I think this role is a beautiful fit for my gifts and interests, and I am so honored to have been chosen.”