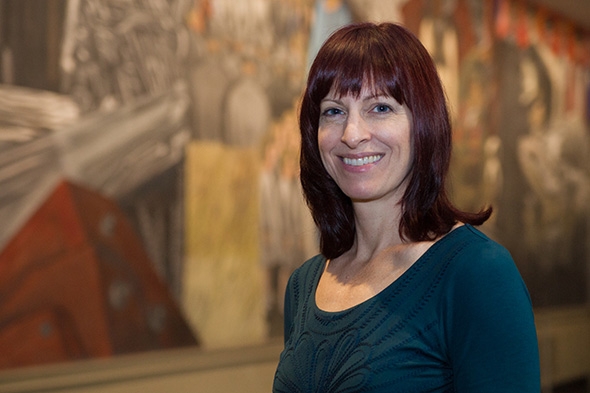 While at Dartmouth, Orozco “developed as an artist” as he worked on his largest work in the United States, says Coffey. (Photo by Eli Burakian ’00)

The Epic of American Civilization, which Orozco painted while he was an artist-in-residence at Dartmouth, was completed in 1934. The murals cover approximately 3,200 square feet in Baker-Berry Library.

“In terms of his broader career, these murals are essential,” Coffey says in the video. At Dartmouth “he really sort of developed as an artist—the evolution of his iconography, the themes that he likes to treat—and a growing mastery of the medium.”

Coffey was named the College Art Association’s Morey Award winner for her first book, How a Revolutionary Art Became Official Culture. One of the artists featured in the book, which took Coffey 10 years to research and write, is Orozco. The book focuses on three prominent museums in Mexico City and the role they have played in institutionalizing mural art since the Mexican Revolution.