Confronting Mercury Contamination in the Environment

Mercury, a notorious heavy metal that poses significant health and environmental threats, is a focus of research at Dartmouth, and Celia Chen, a research professor in the Department of Biological Sciences, recently brought the Dartmouth scientists good news from Geneva, Switzerland. 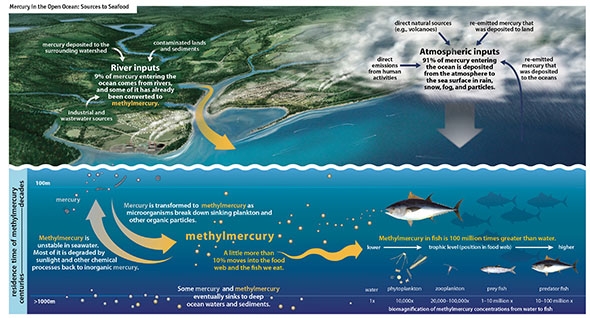 The illustration “Mercury in the Open Ocean” was taken from the C-MERC publication “Sources to Seafood: Mercury Pollution in the Marine Environment,” December 2012. (Image courtesy of C-MERC)

On January 19, 2013, after three years of negotiating, 147 countries, including the United States, agreed on a globally binding treaty for the control of mercury in the environment. The treaty will be finalized in October 2013 in the city of Minamata, Japan. The Minamata Convention on Mercury is named after the city, where serious health damage occurred as a result of mercury pollution in the 1950s.

In humans, mercury acts as a neurotoxin, interfering with the brain and nervous system. Prenatal and infant exposure can harm the brain and immune system. In adults, mercury poisoning can cause memory loss, tremors, and vision loss, and can lead to heart disease. In an effort to protect human health, the new treaty provides controls and reductions across a range of products, processes, and industries where mercury is used, released or emitted.

Chen, the leader of C-MERC (Coastal and Marine Mercury Ecosystem Research Collaborative), attended the treaty negotiations representing Dartmouth as a member of the United Nations Environment Programme’s Global Mercury Partnership. The partnership was formed in order to deliver immediate actions on mercury during the protracted treaty negotiations. 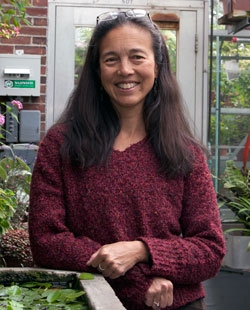 Celia Chen, a research professor in the Department of Biological Sciences, is the leader of C-MERC. (Photo by Joseph Mehling ’69)

She also presented the report Sources to Seafood: Mercury Pollution in the Marine Environment, to inform policymakers about the mercury research published through C-MERC. The report looks at the pathways and consequences of mercury pollution across marine systems by drawing on findings from C-MERC papers, scientific literature, and data across a range of marine systems—from estuaries to the open ocean.

C-MERC was formed when the Toxic Metals Superfund Research Program (SRP) at Dartmouth brought together a group of scientists and policy stakeholders in 2010. The goal of C-MERC was to assess available information on mercury contamination of the world’s marine fish. The SRP is funded by the National Institute of Environmental Health Sciences.

“We included policy stakeholders in our first C-MERC workshop in 2010. The goal was to bring scientists and policymakers together to identify policy questions that science could help answer,” says Nancy Serrell, director of science and technology outreach at Dartmouth.

C-MERC participants attended a second workshop, in 2011, and in 2012, C-MERC scientists published a series of peer-reviewed papers in the journals Environmental Health Perspectives and Environmental Research. The papers detailed key processes related to the introduction, cycling, and uptake of mercury in marine ecosystems, effects on human health, and policy implications. The report Sources to Seafood synthesizes the science presented in these papers and traces the transformation of mercury to methylmercury—its most toxic form—from sources such as coal-fired power plants, mining, and industrial processes, to seafood consumed by humans.

“C-MERC’s research identifies the most important inputs of mercury pollution to different oceans and coastal waters, and can help policymakers understand the links between sources of mercury in the environment, methylmercury levels in marine ecosystems, human exposure, and the human health effects—all of which are critical to the discussion of how local, regional, and global mercury pollution affects the world’s supply of seafood," says Chen.