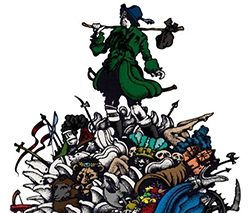 “Candide” will be performed in the Spaulding Auditorium at the Hopkins Center for the Arts on February 15 and 16.

Directed by Broadway veteran David Beach ’86, with the Glee Club’s Louis Burkot conducting, Candide will be staged in Spaulding Auditorium at the Hopkins Center for the Arts at 8 p.m. Friday and Saturday, February 15 and 16. The show is part of the Hop’s 50th anniversary celebration.

The operetta in two acts, based on Voltaire’s 1759 satire Candide, ou l’Optimisme, is a work in motion, tilting between theater of the absurd and transcendent opera and racing across the globe, fueled by Bernstein’s orchestration.

“It’s so funny, I can’t imagine someone sitting through this show and not laughing hysterically,” Ross says. “It’s not really high culture because it’s really brash with the occasional moments of low-browness, but Bernstein’s music is so sublime. I think it could give someone who isn’t otherwise inclined a real appreciation for the mastery he composes with.”

Beach returns to Dartmouth to direct 28 years after he performed in The Boys From Syracuse under Burkot’s direction. The Glee Club director says he thought of Beach immediately when he conceived of the show. 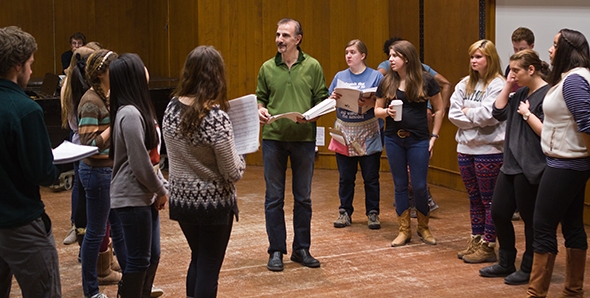 Beach, whose recent Broadway performances include the role of Harry Bright in Mamma Mia! and as an original cast member of Urinetown, says he didn’t hesitate for a moment when Burkot reached out.

“I wrote back like it was a text message. I had an instant reply,” Beach says. “It’s been amazing to have that connection to the past, with Louis asking me up and him still being here and things going so well.”

The work has an illustrious history, evolving from the moment it was conceived. The libretto was written by Lillian Hellman in collaboration with Bernstein, but each staging rearranged and reordered the work, altered by the likes of John Latouche, Dorothy Parker, Stephen Sondheim, John Mauceri, and John Wells. All this and Bernstein’s orchestrations make Candide an exceptionally challenging piece, Burkot says.

“Bernstein makes the audience feel at some points during the piece that he’s moved so completely away from the key where you started that you’ll never find your way back—but you do. The harmonies are very beautiful, but very difficult.”

“Since I had a group of rising seniors this year that have been one of the strongest classes that I’ve had, I thought they would be up to the task.”

Burkot and Beach point out that this Candide offers a showcase of remarkable performances.

Amber Dewey ’12, who stayed on a term after her graduation to work on the show, is exceptional as Cundegonde, Candide’s love interest, Burkot says. She performs some of the most difficult and lovely of Bernstein’s compositions beautifully, he says.

“I knew this was happening and I thought it would be a great opportunity for her to be here without the classroom burden, to be able to just focus on singing this, because it’s extremely challenging.”

Another recent graduate, Tyler Putnam ’09, “who is doing well in New York in opera and Broadway,” returns to play Pangloss, the irrepressibly optimistic philosopher who shepherds the romp, Burkot says. “The role that really needs some age, gravitas, is Pangloss. He’s only 26, but compared to 18- to 19-year-olds, that’s gravitas.”

Zana Thaqi ’13, who plays an old woman who is something of a mother to Cundegonde, says taking on a piece like Candide and working with Beach has been a remarkable experience.

“David Beach is so hilarious and he makes everybody feel great and he’s also a person who gets things done. If something’s not happening, he’ll be very comfortable with saying, ‘OK, guys let’s do this,’ ” Thaqi says.

Burkot says all the performances of the Glee Club members, not just the headliners, rise to the challenge of this show.

Hannah Perry ’15, a member of the chorus, says working on Candide has forced her to challenge herself musically.

“I would compare my past experience to the cliché of easing myself into the water and learning how to swim when it comes to singing classical music. But then this term, starting with Candide, it was just diving right in.”

For Beach, Candide is the best of all possible worlds.

“I think it is going to be so much fun to see,” he says. “I was in a lot of productions when I was an undergraduate where it was really interesting to work on, but it wasn’t very interesting to see.”

“I wanted this to be both, and I think it is clear that it will be.”