With the cold weather and short days, Michael Perlstein ’14 says, this is the time of year when students get immersed in schoolwork—and overlook something important. 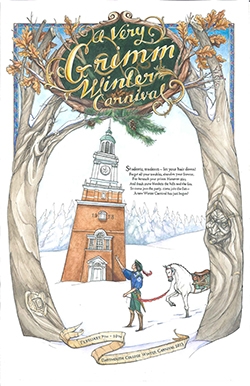 “We forget the amazing place we’re living in,” says Perlstein. “Carnival helps us remember that.”

“Winter Carnival is special to me because it celebrates a unique and special time at Dartmouth,” says Eric Ramsey, director of the Collis Center for Student Involvement, which helps organize the festivities. “The students who lead the activities are excited about winter here. The great events they plan encourage all to get out and enjoy our winter days in interesting and fun ways.”

The festivities include numerous cultural and athletic events—from a chili cook-off to the Polar Bear Swim in Occom Pond to a jazz ensemble performance—as Dartmouth celebrates wintertime in New Hampshire.

Perlstein, along with Alex Welton ’14 and Mandy Bowers ’14, is a co-chair of this year’s Winter Carnival. For the first time in years, the celebration will feature a snow sculpture contest, the winners of which will receive prizes made possible by a donation from the Dartmouth Class of 1977, according to Bowers.

“We believe the competition will be a great opportunity for students to bond while celebrating the Hanover winter,” says Bowers.

This year’s celebration is entitled “A Very Grimm Carnival,” a reference to the Brothers Grimm, who collected, wrote, and published stories from folklore such as Rapunzel, Snow White, and Little Red Riding Hood. The main snow sculpture on the Green is meant to depict Little Red Riding Hood and the “big, bad wolf.”

Dartmouth athletic teams will host a slate of contests, highlighted by the ski team’s alpine and Nordic races at the Skiway and Oak Hill, respectively, on Friday and Saturday.  In addition, women and men’s hockey, basketball, squash, and swimming teams, along with men’s tennis, will have home contests. 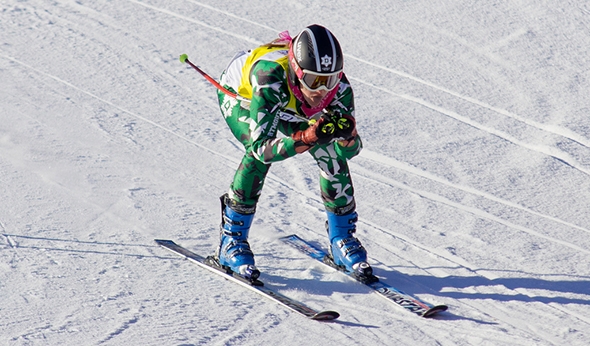 “A great part about the Dartmouth Carnival is the strong and consistent attendance of the student body for races,” says Benjamin Morse ’14, a captain of the ski team. “It is a real emotional boost to see fellow classmates and friends out there on the hill cheering on the Big Green.”

Another fixture of the Winter Carnival is the annual poster drawn for the occasion. This year’s poster competition was won by Teagan Daly ’13. Daly, an engineering major modified with studio art, says it was a challenge to mold the dark themes of the Brothers Grimm into an upbeat carnival poster.

“A lot of the better-known stories deal with isolation as a theme, specifically with being trapped or lost in a dark and frightening forest,” says Daly. “By turning Baker Library into Rapunzel’s tower and tinkering with the syntax in the prince’s proclamation (students, students—let your hair down!), I tried to illustrate Winter Carnival as liberation from the midterms and bitter cold weather of winter term.” 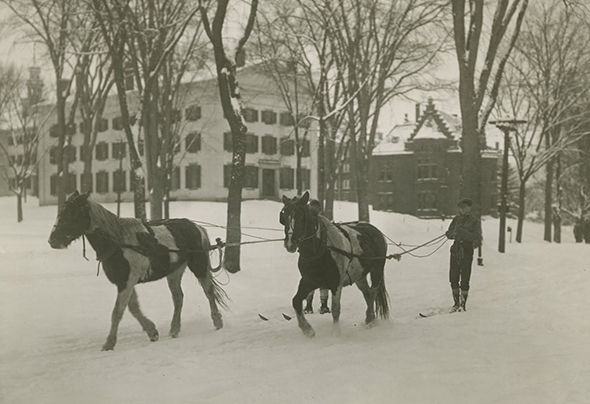 The early years of the Winter Carnival included skijoring races—in which horses and ponies pulled skiers along a racecourse. (Courtesy of Rauner Library)

Winter Carnival dates back to 1910, when a sports meet was organized as a way to showcase Dartmouth’s winter athletes. The early years featured competitions such as a 220-yard snowshoe dash, ski jumping contests, and skijoring races—in which horses and ponies pulled skiers along a racecourse. Over the years, the Carnival expanded, adding many social and athletic events, so much that a 1955 Sports Illustrated article wrote that the celebration “is a 30-ring circus that makes Ringling Brothers look like a two-wagon job on a vacant lot.”

The opening ceremonies begin at 7 p.m. on February 7 on the Green.

For more information and a complete schedule of events, visit the Collis Center website.