Filmmaker Nancy Ghertner is on campus this week for a screening of her 2012 documentary After I Pick the Fruit: The Lives of Migrant Women, followed by a question-and-answer session with the director. 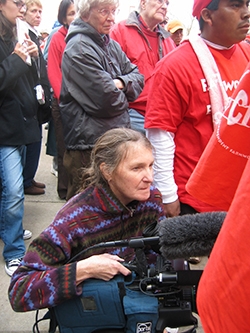 Nancy Ghertner is a visual artist and filmmaker of experimental and documentary films. (Photo courtesy of Nancy Ghertner)

“I’m really excited about meeting with the students,” says Ghertner, who lives in Sodus, N.Y. “My film follows the life inside migrant women and their families.”

The 93-minute film will be shown at 7 p.m. on February 20 in Loew Auditorium of the Black Family Visual Arts Center. The film profiles five immigrant farmworkers over a period of 10 years as they balance roles as mothers, wives, and workers on the apple fields in New York or picking oranges in Florida. The documentary also examines how life has changed for these immigrants since September 11, 2001, and the Bush administration’s subsequent crackdown on illegal immigration.

Ghertner says she wants to bring to light the stories of these often-overlooked members of society. The screening is free and open to the public. 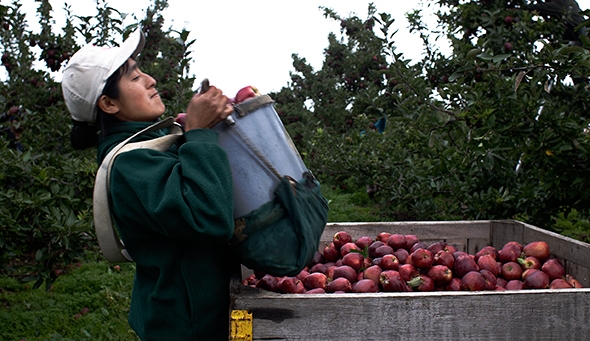 At noon on Thursday, February 21, there is a luncheon with Ghertner, free and open to the public, which will take place in the 1930 Room of the Nelson A. Rockefeller Center.  The lunch is sponsored by the Council on Student Organizations, The Dartmouth Radical, the Department of Film and Media Studies, and the Tucker Foundation.

Ghertner, a visual artist and filmmaker of experimental and documentary films, says she is eager to speak with students of different backgrounds and interests. “It’s fun to see the range of questions.”

She looks forward to answering those questions, in the hope that Dartmouth students will come away with a better understanding of these “invisible migrant workers,” Ghertner says.