It might seem odd to bring artists to a symposium that is focused on improving health care, education, and economic development. But to Studio Art Senior Lecturer Jack Wilson, it makes perfect sense.

“I have a firm belief,” says Wilson, “that arts are vital to cultural development.” 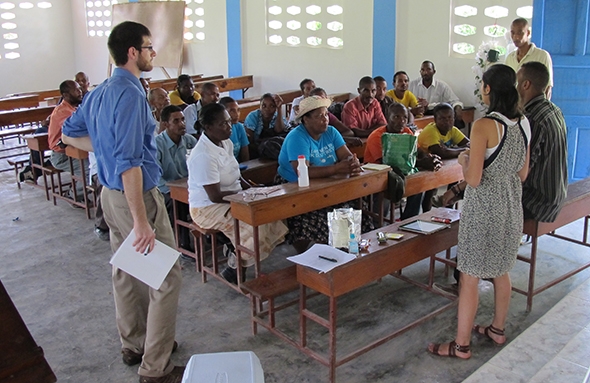 As part of Dartmouth’s work in Haiti, Cole Zanetti, a resident at Dartmouth-Hitchcock Medical Center, and Amita Kulkarni ’10, presidential fellow in global health, lead a meeting with community health workers from St. Boniface Hospital in Fond des Blancs, Haiti, to discuss the use of mobile technology to support their work. (Courtesy of The Dartmouth Center for Health Care Delivery Science)

That’s why Wilson helped bring 11 Haitian artists to Dartmouth to participate in the Porter Symposium, entitled “Haiti and Dartmouth at the Crossroads.” The artists will meet with students, perform on campus, and contribute to symposium discussions.

Wilson received a faculty grant for his project, “Dartmouth/Haiti: An Arts Connection,” which brings the artists to campus. He is one of 17 recipients of the grants of up to $4,000 each. The grants are supported by the Office of the President and the Office of the Provost as part of Dartmouth’s Year of the Arts initiative.

The symposium, running February 20 through 22, will focus on developing tangible solutions to problems in Haiti and furthering Dartmouth’s work with the country, says Wilson, an architect and a lecturer at Thayer School of Engineering.

“The goal is to come out of the conference with feasible and detailed projects to help Haiti,” Wilson says. “Groups will be working to hammer out the details of proposals for the projects.”

Business leaders, health care experts, and government officials from Haiti and the United States will gather to present information and come up with strategies to promote economic, educational, and health care development in the Caribbean country. The artists, including 10 musicians and a graffiti artist, will participate in discussions and share their work with Dartmouth students.

“While much of the symposium will focus on developing solutions to some of the greatest development challenges facing Haiti’s reconstruction efforts, we are excited for the Haitian art and music components of the conference that will celebrate the culture of Haiti and serve as a reminder of the vital role art and music play in a country’s well-being,” says Amita Kulkarni ’10, presidential fellow in global health and an organizer of the symposium.

Wilson says he had no connection to Haiti before a massive earthquake struck the country in 2010. But he was drawn to the country through working on the $300 House project, a collaborative effort by the Tuck School of Business, Thayer School of Engineering and other departments that focused on providing housing to victims of the quake. During visits to the country, Wilson developed close relationships with organizations there such as GHESKIO. Noting initiatives like the $300 House project and research being conducted on health care delivery science, Wilson says Dartmouth can be an asset to Haiti.

“For me, it is really interesting that Dartmouth is in this unique position to really help a country like that,” says Wilson.

“I see Dartmouth’s engagement with Haiti as not only helping Haiti, but also helping Dartmouth,” Wilson says.

Other faculty grant projects include a conference on animation, a sound exhibition in Copenhagen, and an iron-casting workshop. The Year of the Arts executive steering committee and the Dartmouth Centers Forum have also provided funding for student mini-grants throughout the year.

Two of the grant projects took place in October and November 2012:
Image 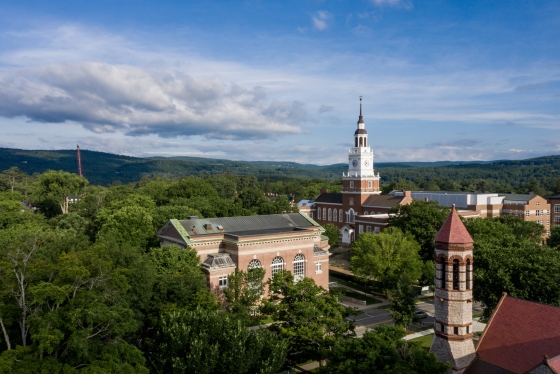