In celebration of the 40th anniversaries of coeducation at Dartmouth and the passing of Title IX, Julie Foudy, Olympic gold medalist and World Cup soccer champion, will speak on campus February 26. 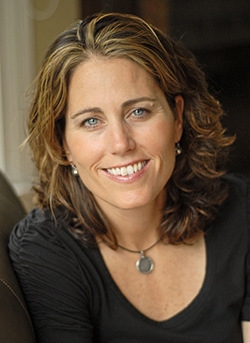 Julie Foudy will speak on campus February 26 about her experience with the U.S. Women’s National Team. (Photo courtesy of IMG Broadcasting)

“I will talk about a lot of my experiences with the national team,” says Foudy, adding with a laugh, “I like to tell a lot of stories.”

Foudy’s talk, free and open to the public, starts at 7 p.m. in the Hopkins Center for the Arts’ Alumni Hall. Her visit is sponsored by Dartmouth Athletics and the Office of the President. Foudy is an advocate for Title IX, a law passed in 1972 that requires gender equality for any education program or activity receiving federal funding. The law’s passing increased opportunities for women and girls in sports.

“We are delighted to have Julie Foudy on campus to speak to the community in conjunction with the celebration of women at Dartmouth and the landmark Title IX law,” says Director of Athletics and Recreation Harry Sheehy. “She is one of the most recognizable female athletes for our current generation of students, and has been such an inspiration for countless women and girls for many years. Julie will also meet with our coaches and student-athletes, giving them a terrific opportunity to speak with one of the true national leaders in athletics.”

Off the pitch, Foudy is an outspoken advocate for gender equality. She has served as president of the Women’s Sports Foundation and founded the Julie Foudy Sports Leadership Academy.

“I always talk about sports being a wonderful gift. You learn so much about yourself,” says Foudy. “I could talk for days about the benefits.”

There have been great strides in athletics since Title IX, she notes, but says there is more work to do. “Obviously, you see the number of girls participating, and that is a huge improvement. That’s wonderful to see. But you don’t see those numbers, boys or girls, in low-income areas. That’s an area I’d love to see improved.” 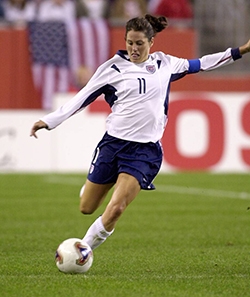 Foudy works for ESPN, and serves as a television commentator for events such as the FIFA Women’s World Cup and the Olympics. (Photo courtesy of IMG Broadcasting)

A graduate of Stanford University, Foudy works for ESPN, serving as a television commentator for events such as the FIFA Women’s World Cup and the Olympics.

Some Dartmouth students may be too young to remember Foudy as a player.

“I’m not the girl who took my shirt off,” Foudy says with a laugh, referring to Brandi Chastain, who took part in a traditionally male soccer celebration after scoring the game-winning penalty kick in the 1999 World Cup.

But Kimberly Rose ’13, a co-captain of the soccer team, remembers her vividly.

“I remember Julie as one of the hardest workers on the field, and someone who dictated the pace of the game for her team. I also admired how great a leader she was.  She seemed to be the most verbal person on the field, directing her teammates and pumping them up in team huddles,” says Rose. “I look forward to hearing about the obstacles she and her teammates had to overcome as pioneers for women’s soccer.”