Dartmouth’s Hopkins Center for the Arts has co-commissioned American film auteur Jim Jarmusch and the acclaimed composer Phil Kline to create a new opera, Tesla in New York, telling the story of Nikola Tesla, one of history’s most iconic and enigmatic scientists.

On April 5 and 6, the Hop will preview an in-progress, concert presentation of the work by Jarmusch and Kline. The presentation at Dartmouth will follow a weeklong campus residency by the creative team, during which they will develop the performance in the Hop’s facilities, throwing the creative process open to the college community.

The Hop’s preview presentation of Tesla in New York will include a completed musical score and early visual designs. 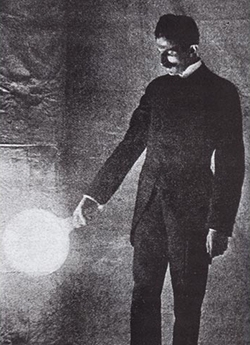 Nikola Tesla was one of history’s most iconic and enigmatic scientists. (Photo courtesy of the Hopkins Center)

Slated for completion in late 2013, the opera will feature set designs from the puppeteers of Phantom Limb Company, whose Hop-commissioned 69◦S premiered at Dartmouth in 2009, and performances by the American Contemporary Music Ensemble (ACME). Tesla in New York advances the Hopkins Center’s 50-year tradition of commissioning new work from the world’s leading artists, and is among numerous Hop projects supported by a $575,000 grant from The Andrew W. Mellon Foundation.

During the residency leading up to the performance, Kline, the musicians, and the artists of Phantom Limb Company will engage with the campus and community through class visits, public workshops, and a collaborative research project with graduate students at Dartmouth’s Thayer School of Engineering. The artists will also have complete access to the Hop’s theatrical facilities as part of their weeklong residency, enabling them to develop and refine the performance.

Widely considered the progenitor of modern electrical engineering, Nikola Tesla was one of the most influential inventors of the 19th century, a mysterious genius who revolutionized the study of electromagnetism before descending into poverty and madness. Tesla in New York will focus primarily on Tesla’s final years, when he lived as a paranoid recluse in the Hotel New Yorker.

The show will employ a non-chronological structure, encompassing flashbacks to Tesla’s early life in Croatia, his ill-fated collaborations with Thomas Edison, and other biographical highlights. Incorporating photography, film, and video in addition to live musical performance, Tesla in New York marks the first theatrical collaboration for Jarmusch, an acclaimed director best known for such award-winning independent films as Stranger Than Paradise and Broken Flowers.

Jarmusch first came to prominence with his 1984 breakout feature Stranger Than Paradise, which received the prestigious Camera D’Or at the Cannes Film Festival and is regarded as an early landmark of the independent film movement. Jarmusch’s films are renowned for their distinctly idiosyncratic style, a sensibility that can be seen in works as diverse as the Memphis-set ensemble comedy Mystery Train; the Neil Young concert documentary Year of theHorse; and the revisionist neo-Western Dead Man, which helped launch the career of Johnny Depp. Jarmusch is currently in post-production on Only Lovers Left Alive, a vampire romance starring Tilda Swinton and John Hurt.

Kline is known for compositions across many genres and contexts, from experimental electronics and sound installations to songs, choral, theater, chamber, and orchestral music. He first gained wide renown with his Christmas piece Unsilent Night, which debuted in the streets of Greenwich Village in 1992 and is now performed annually in dozens of cities around the world. Other compositions include Zippo Songs (a song cycle based on poems Vietnam vets inscribed on their Zippo lighters that was recently an acclaimed offering of the Brooklyn Academy of Music’s 30th Next Wave Festival), and commissions for the Bang on a Can All-Stars, the La Jolla Symphony Orchestra, the St. Luke’s Chamber Ensemble, and the gigantic Kotschmar Organ of Portland, Maine.

The Hopkins Center’s commissioning support for Tesla in New York marks the latest installment of the Hop’s robust commissioning program, which extends back to the institution’s founding and has become a national model for the growing role of collegiate arts centers in supporting the development of new work from acclaimed artists.

The co-commission is supported by a grant from the Mellon Foundation, which has enabled the Hop to continue advancing new models of engagement for the next generation of classical music audiences. Given in recognition of the Hop’s leadership as one of the nation’s  premier academic arts presenters, the Mellon grant is also supporting several other highlights of the Hop’s 50th anniversary season—including performances by (and commissions for) Brooklyn Rider, Gabriel Kahane, Orpheus Chamber Orchestra, and others—as well as a national multi-campus research project on student engagement with classical music resulting in a symposium that will take place on the Dartmouth campus in June 2013.