The switch on the wall turns on the light; flip it the other way and the room goes dark. Now imagine such a switch, but on a molecular level. This is not science fiction. Molecular switches are a high priority for the National Science Foundation (NSF), high enough to award $650,000 to Ivan Aprahamian for five years of basic science research at Dartmouth. 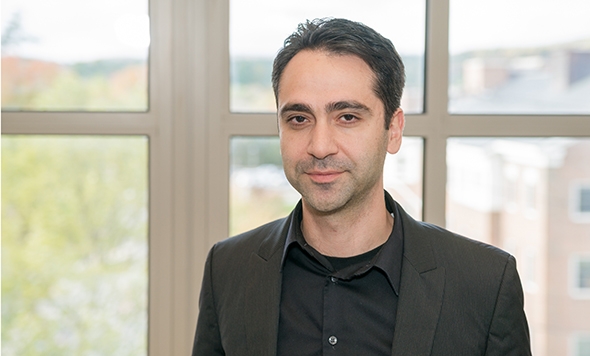 “We are focused on basic science but of course we are also developing applications,” says Aprahamian. Among the potential applications for his molecular switches, he foresees, are fighting cancer through innovative drug delivery systems and signaling the presence of food spoilage to consumers.

Aprahamian, an assistant professor in the Department of Chemistry, is receiving $260,000 as the first installment of his new NSF CAREER award. “The Faculty Early Career Development (CAREER) Program … offers the National Science Foundation’s most prestigious awards in support of the early career-development activities of those teacher-scholars who most effectively integrate research and education within the context of the mission of their organization,” the NSF states.

“This is a very prestigious award, far more competitive than a regular NSF grant and I am very happy for this recognition,” says Aprahamian. “In addition to the science, there is a large outreach component and my students and I are involved in making chemistry compelling to the general public.”

Aprahamian is developing hydrazone-based switches. Hydrazones are organic compounds that are particularly suitable for the construction of molecular switches because of their ease of synthesis.

“Most of the switches in the literature have complicated structures and require time-consuming multistep synthesis,” he says. “We are developing systems that are easy to make, and that require only one or two very easy, straightforward synthetic steps. Although our molecular switches are structurally simple, they still can perform complicated functions.”

The color being reflected from a liquid crystal cell changes because the hydrazone switch incorporated in the liquid crystal undergoes geometrical changes in response to the acid and base inputs. (Image courtesy of Ivan Aprahamian)

His switch turns on or off based on its sensitivity to pH—a measure of acidity or alkalinity. “We are investigating how to control the pH at which the switch operates, the magnitude of its geometrical change, and the speed at which the switch can be reset to its original state,” he says.

As to their future application in anticancer drug delivery, Aprahamian explains that the environment around cancer cells is more acidic than normal cells. A capsule containing the drug can use a molecular switch that goes into action only when it detects the acidity difference around the cancer cells, releasing the drug at that locale. “You are basically targeting only the cancer cells and not the healthy ones,” says Aprahamian. “This is important because chemotherapy does not distinguish between them, leading to adverse side effects.”

In another health-related application, again responding to a change in pH, the switch could change the color reflected by a liquid crystal—like the ones in your LCD monitor or TV screen. “When meat or fish go bad, they release biogenic amines (basic compounds),” Aprahamian explains. “If your switch is triggered by the amines and the detection is synched with a color change in the packaging, this can alert a consumer of spoilage.”

While his research moves forward, his commitment to outreach has kept pace. Aprahamian is particularly proud of establishing an American Chemical Society SEED (Summer Educational Experience for the Disadvantaged) program at Dartmouth.

”We bring in underprivileged high school students who do not have a lot of access to science labs and give them an opportunity to come here to Dartmouth in the summer and do hands-on research“ he says.

In 2010, Aprahamian’s group had participated in the first USA Science & Engineering Festival in Washington, D.C. ”We created a demonstration to explain how molecules assemble themselves—a process called self-assembly—into something larger and more meaningful,“ he says. ”For example, this is how single stranded DNA come together to form double helices.“

His exhibit, along with other Dartmouth offerings, drew about 10,000 visitors over two days. He also brought his demonstrations to the Upper Valley, with sessions at VINS (Vermont Institute of Natural Science), the Montshire Museum of Science, and McAuliffe-Shepard Discovery Center, targeting young children as part of his personal mission to enlist and educate the next generation of scientists.