Mary Albert: Ice and Snow and Many Hats

By her own admission, Mary Albert, Thayer ’83, wears many hats in the pursuit of her three loves: education, science, and engineering. The common threads running through them are ice and snow.

Albert has been on the Dartmouth faculty for five years, but her history with the institution is much longer. She spent 30 years just up the road as a senior research engineer at the U.S. Army Cold Regions Research and Engineering Laboratory (CRREL) and she earned a pair of degrees from Thayer School of Engineering at Dartmouth. 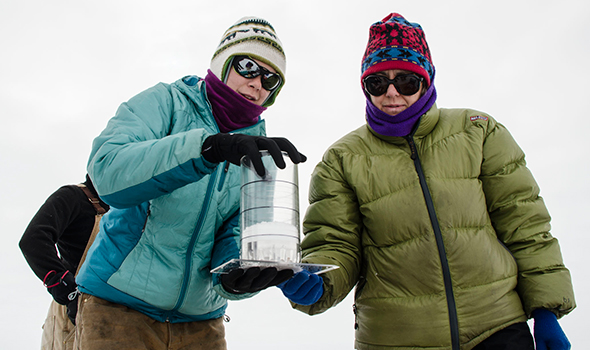 At Summit Station, the highest point on the Greenland ice sheet, graduate student Stephanie Gregory (left) and Professor Mary Albert, Thayer ’83, discuss permeability testing of the sample cut from the top of the snowpack. (Photo by Courtney Hammond ’11)

“When the people here at Thayer heard I was retiring from CRREL, they said, ‘Why don’t you come and join us here?’” says Albert. “I said I’d be delighted to, because I wasn’t really ready to sit home and knit.”

Now a professor of engineering at Thayer School, she maintains an unwavering commitment to mentoring and teaching that may go back to her pre-CRREL stint as a Woodstock High School math teacher. “I think the next generation of scientists and engineers are really important for all of us, and when I was working at CRREL, I’d always have Dartmouth students working on my projects,” Albert says.

Currently, Albert has graduate students working toward master’s and PhD degrees, and “a herd of undergraduates.” She has established the Ice and Climate Seminar series, which provides an opportunity for graduate and undergraduate students to get practice in speaking about their research in a collegial, interdisciplinary setting. “The Ice and Climate seminars enhance cross-campus communication and partnerships; it is a monthly meeting where students and faculty from engineering, earth science, and other departments can share ideas, get input on their research, and potentially form new partnerships.”

Much of Albert’s early work at CRREL addressed U.S. Army concerns. The threat of a Soviet invasion coming from the north, across the Arctic, still loomed large, and the Greenland ice sheet was a good place for early-warning radar antennas. To avert potential construction engineering problems, a borehole was drilled, and from that came information-rich ice cores. In the process, CRREL scientists and engineers began to think about a possible record of climate changes reflected in the cores. By the time Albert joined CRREL, the Army was no longer working on ice cores, and Albert’s work for the Army focused mainly on surface-air exchange processes in a variety of areas, from deserts to snow-covered terrain. 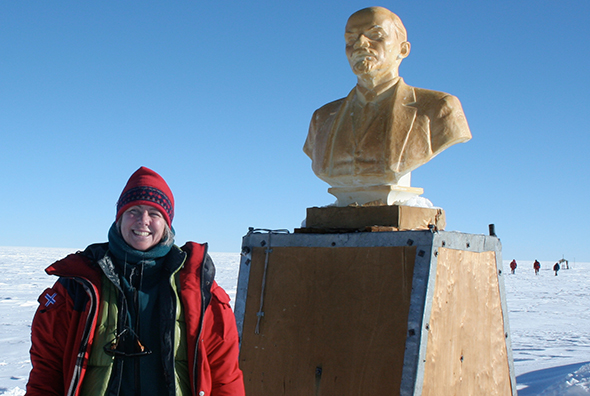 Professor Mary Albert visits a likeness of Lenin at the Pole of Inaccessibility (the point in Antarctica farthest from any ocean), the site of a now defunct Soviet research station. (Photo by Louise Albershardt)

In addition to her Army work, Albert had projects funded by the National Science Foundation (NSF). “We were looking at snow-air interactions, trying to understand how interactions in the near-surface snow happen and how they affect both the chemistry of the atmosphere above the snow and the archive of climate evidence once that snow becomes buried on the ice sheet,” she says.

Albert’s research now focuses mainly on climatic evidence in ice cores. With funding from the NSF, her investigations are oriented toward the polar regions and deal with ice core interpretation, in particular the processes by which ancient atmospheric gases became trapped in the polar ice sheets of Greenland and Antarctica, for improved understanding of past atmospheric composition.

One area of Albert’s involvement includes the geologic period known at the Eemian, the interglacial period that ran from about 130,000 years ago to about 114,000 years ago. Albert is part of an international team that recently published a paper in the journal Nature, detailing an Eemian climate reconstruction based on an ice core from Greenland. “There is a lot of interest in what the Eemian was like because the temperatures were warmer and sea levels were higher. This is useful evidence to better understand what we are headed into now,” Albert says. “What is happening now is complicated by human-induced warming, but what occurred in the Eemian did not have an anthropogenic influence.”

As the geologic pendulum repeatedly swung between glacial and interglacial periods over the last 800,000 years, the amount of carbon-dioxide (CO2) in the atmosphere varied between approximately 180 and 280 parts-per-million (ppm), Albert explains. “With CO2 levels now above 390 ppm, we are essentially doing an experiment with the climate of our planet; CO2 levels this high have not existed since the appearance of modern Homo sapiens on the Earth.”

In addition to her research and teaching, Albert wears an NSF hat as executive director of the U.S. Ice Drilling Program Office (IDPO), doing strategic planning with the other ice core scientists across the country to identify and articulate the future direction of the science. In addition, while wearing her IDPO director’s hat, Albert oversees the Wisconsin-based Ice Drilling Design and Operations group—the engineers who actually do the drilling. “I keep putting on different hats,” she says.

Though ice core science is relatively young, less than 50 years old, Albert says it has taught us a lot about climate change and about greenhouse gases in the past.

“The excitement of being in an adventurous place like the polar regions, and studying an important problem associated with current conditions and abrupt climate change in the past is really invigorating, both for me and the students, and we are just having a great time.”