The Rauner Special Collections Library has embarked on an ambitious project that will take place over the next five years. 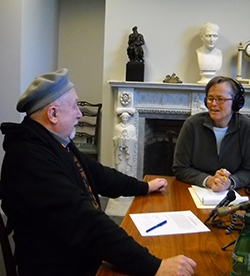 “Dartmouth’s Community and Dartmouth’s World” will be a collection of oral histories from current and former Dartmouth faculty, students, and staff. Beginning with President John Sloan Dickey, Rauner had collected the oral histories of Dartmouth presidents, trustees, and administrators since the 1970s. But recently, Oral History Project Editor Mary Donin and College Archivist Peter Carini decided to expand the library’s oral records to fill some gaps in the institution’s archives.

“Oral history is a more useful tool for those who tend to not be documented, and since there are numerous records on Dartmouth presidents in our collections, we wanted to expand it to capture the gaps, in terms of students, faculty, and the general population of the College in the story of its day-to-day life,” says Carini.

The project is meant to illustrate how Dartmouth has been changed by the increasing diversity of its community since the end of World War II. It focuses on what it meant in the past and what it means now to be an insider or an outsider at Dartmouth.

“We are looking for voices that have been silent in the past, and we’re finding that this means we will end up talking to groups or individuals who may not necessarily have been interviewed, or felt visible, or even felt they really belonged here while they were at Dartmouth,” says Donin. 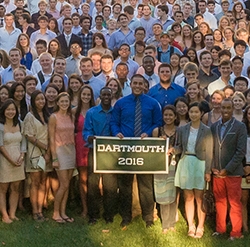 The new oral history project will tell the story of how the Dartmouth community has changed since World War II, and will include narratives from faculty, staff, and students, including members of the Class of 2016. (Photo by Eli Burakian ’00)

While Donin and Carini are seeking interviews of people who would traditionally be considered minorities in terms of race and socioeconomic class, they also wish to record the stories of those viewed as minorities because of their religion, sexuality, citizenship status, or political views.

“Our narrators are also those who are important from a historical standpoint, like the students who founded the Dartmouth Review. They’re an interesting group because they are both insiders—within their particular milieu of what Dartmouth was to them at the time—and outsiders, in the political sense, because of their conservatism,” says Carini.

Tell Us Your Story

Read the blog, published by the Rauner Library.

Rauner Library is looking for narratives such as these. The goal of a new oral history project, called “Dartmouth’s Community and Dartmouth’s World,” is to document how the Dartmouth community has been transformed over the 68 years since the end of World War II.

Carini notes that Dartmouth staff members are one of the least-documented groups on campus, as compared to alumni and faculty. Therefore, a particular goal of the project is to capture the voices of these employees, who play an integral, and somewhat unrecognized, role in the functioning of Dartmouth, Carini says. Some of them have had generations of family serve as staff members, too.

Throughout the process, the Rauner staff has been struck by both the honesty and intimacy of the narrators, whom Donin suspects are touched that Rauner has reached out to them to hear their perspectives on Dartmouth and what their formative years on campus were like.

“Even the people who faced a lot of adversity at Dartmouth still hold the institution very dear and very close. They may have had a difficult time, but it was still a very important time in their lives, says Carini.”